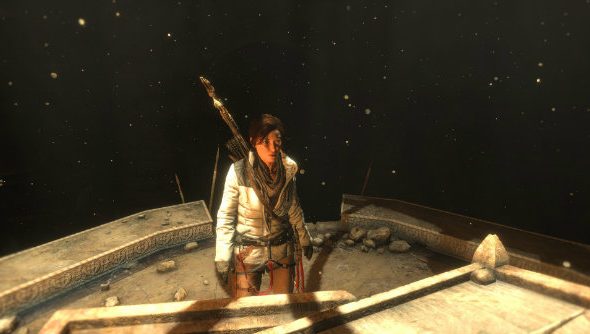 Opening the second day of GDC 2016’s Game Narrative Summit, six members of Crystal Dynamics’ narrative team discussed the development of Rise Of The Tomb Raider. Rhianna Pratchett, daughter of beloved fantasy author Terry Pratchett, revealed how drawing on her relationship with her own father allowed her to “come to peace” with the dad-heavy storyline.

Some of the titles in our list of PC’s best games have good stories, too.

Rise features Lara Croft a year after the events of Tomb Raider, using her late father’s research on a quest for the lost city of Kitezh. The storyline uses that quest to explore Lara’s feelings over losing her father to suicide at a young age.

The team obviously viewed that as one of the most important aspects of the game. Crystal Dynamics use an internal “metascripting” system with hashtags to show at a macro-level the different story threads. John Stafford, Lead Narrative Designer explained that this was important to reveal the “tension and emotional pacing” across the game.

“For a while we noticed that dad wasn’t in the first couple of hours of the game, and we were worried that people would forget that thread,” he said, “so we added the dictaphone mechanic where she would hear his tapes. You might notice that Lara doesn’t have a phone—that would open a whole world of mechanics we don’t want to deal with… like Twitter. We think of Lara as a Luddite.”

He felt that perhaps they may have been too successful with spreading #dad across the whole game, however. “At one point the team was like, ‘she needs to shut up about her dad.’”

One member of the team that had difficulties with the emphasis on Lara’s father was Rhianna Pratchett, the lead writer on the project. She discussed this while talking about the “campsite” segments of Rise of the Tomb Raider, the “quieter, more thoughtful moments” of the game where Lara can “digest what’s going on and how she feels about it.”

“These were popular in the first game,” she said, “so we carried them over.”

“Our additional writer did her father’s work diaries, and I did the more personal diaries, from Lara when she was a child,” she explained. “These were very fruitful for me as a writer, because initially I was concerned by the father plotline, and I didn’t warm to it.”

In order to warm to it, she revealed that she “pulled on real-world influences” in her relationship with her own father, Terry Pratchett.

“My father passed away from Alzheimer’s last year, and in his writing before that he talked about ‘the one memory he didn’t want to lose’ and that memory was the night I was born. So I took that and I merged that with Lara’s father’s memories of her being born.”

“Even though that’s totally ‘Mary Sueing’” she said, referring to the literary concept of ‘self-insertion’ into the narrative, “it really helped me come to terms with the father storyline.”