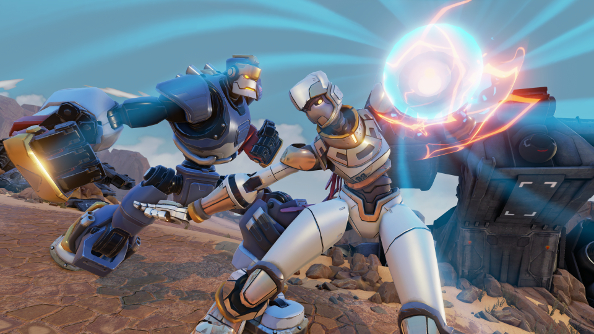 RIsing Thunder, the free-to-play fighter from the EVO founders at Radiant Entertainment and Seth Killian has freed itself from closed technical alpha and is now available for everyone. Want to take charge of a robot and start pummelling? You can now do that.

During EVO, I had a chat with Killian, learning more about what is a very promising fighting game. It’s novel in that it does away with complex inputs for specials, acknowledging that it’s more about knowing when you need to use a move instead of memorising tricky inputs.

Killian and Radiant Entertainment’s hopes for Rising Thunder is that it will keep people playing for longer, learning the ropes, turning casual fighting game fans into hardcore ones. It’s meant to bridge the gap between the two, but is still very much for a serious fighting game audience.

It’s also a bit special in that it’s being built from the ground up as an online game. You don’t need to hunt down chums and get them to come over and play to see it at its best. You can read about how they’ve managed to solve the online problems that plague fighting games and more by checking out our Rising Thunder interview.

If you want to beat up some robots, just sign up here and start playing.