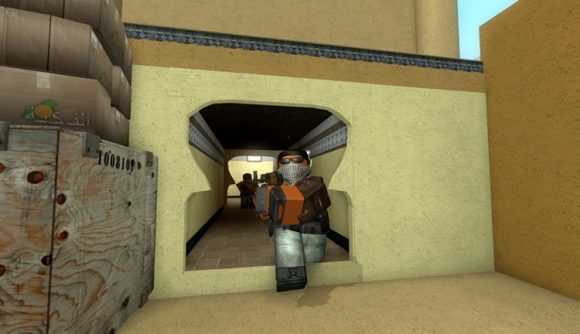 Someone has created a fairly faithful version of Counter-Strike in Roblox, because the universe has decreed it. Counter Blox is a new community-created game for up to 14 players, and it includes all the key elements of Valve’s competitive shooter.

In Counter Blox, you play on a squad of either terrorists or counter-terror agents, and as each round begins you get the opportunity to buy weapons and gear with points you’ve earned in the game, just like Counter-Strike. The only major difference is the large, blocky Roblox character models, who all have Counter-Strike style costumes (the fingerless gloves look just hilarious stretched over the big Roblox “hands”).

Counter Blox has been out for quite a while, in fact – it first showed up in September 2015, but developers ROLVe Community have been updating it ever since. They’ve recently added three new maps, Barcelona, Office, and Metro. And it’s proven to be popular – 1,227,025 people have marked it as a “favorite” mode, and at the time of this writing there were 6,456 people playing.

To download, just head to the Counter Blox page at Roblox.com. While you’re there, you can vote for your favorite games and studios in the annual Bloxy awards, too – and ROLVEe is up for the Studio of the Year award.