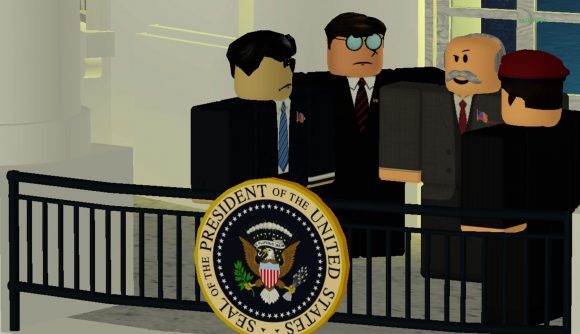 Roblox is a true sandbox game that lets players do just about anything – but infiltrating White House press briefings probably wasn’t on the design document when its developers began working on it. But one Roblox player seems to have done exactly that – beginning with a government roleplay group, a player developed an online persona that’s managed to pose questions directly to the US president’s press secretary.

Politico has the full story of ‘Kacey Montagu,’ a name that’s popped up several times in White House press briefings with Biden administration press secretary Jen Psaki. This person doesn’t exist, as the story explains – it’s the name of a persona for a person whose identity is unclear.

Montagu began, it seems, in a Roblox role-playing group called nUSA, which is dedicated to simulating a fictional US government the way that high school students will sometimes participate in a ‘mock UN’ exercise. From there, they created an email address for the persona, as well as Twitter accounts that re-publish widely available information (such as the vice president’s daily schedule) to burnish the persona’s credentials as an official reporter.

As these accounts got more attention, the person behind Montagu began asking about actual press credentials. These attempts took advantage of two current realities in the US political press: first, that White House press briefings are attended by a ‘pool’ of reporters that’s much smaller than the number of national political reporters in the country; and second, the COVID-19 social distancing restrictions that further whittle that number down to just 14 reporters in the room at any given briefing.

What’s perhaps most remarkable about the stunt is that it doesn’t appear to be a trolling operation at all – by all accounts, the person behind the Montagu persona just had questions they felt weren’t being addressed by the mainstream political press. They’ve also gone about it simply by doing what journalists do most of the time: emailing questions to people and hoping they write back with answers (seriously, that’s like 90% of the job – the other 10% is praying the CMS doesn’t hate you today).

Sure, this story involves some manipulation and lies, but, from the looks of the lengthy story — wow — the person, anonymous as they were, pretty much appeared to be … doing journalism. Even if it started out as a gag or whatever.

(And even the “shouldn’t hide who they are” can be a grey line at times.)

Had the person actually tried to come on the WH campus, and lied, and still gotten in, yeah, that’s news.

But this isn’t that. An anonymous person did WH reporting and asked questions of WH officials.

All that said, it seems the Montagu persona hasn’t been above a bit of bragging back in the nUSA in Roblox. ‘Montagu’ has routinely emailed questions – on topics ranging from COVID-19 travel bans to the administration’s plans for ambassadorships – to pool reporters, and several of them have wound up being asked during White House press briefings, with Psaki’s responses recorded by publications like the Cleveland Plain Dealer and CQ Roll Call.

The White House declined to provide comment to Politico on the story, and it appears that for Montagu, the jig is up for the time being. Associated Twitter accounts have been suspended and profiles on Google and LinkedIn have disappeared.

The members of nUSA that Politico spoke with didn’t seem surprised that ‘Montagu’ managed to pull off the ruse, and one suspects that they’d have kept pushing to see how far it would go before being exposed.

“[I]f this ha[d] went on, she very well could’ve obtained her own day pass and been able to travel [to D.C.] and into the White House,” one player suggested, although it’s not at all clear the game would have survived a background check by White House security.

Whoever is behind the Kacey Montagu persona is now basking in the media spotlight, retweeting mentions on major media outlets from the @SecMontagu Twitter account now that the secret is out.