Robocraft, the Steam Early Access robot battling game, is soon to emerge from the engineering bay with a shiny set of newly installed components. The ‘Full Spectrum Combat’ update is focused on improving the combat side of Robocraft, as well as adding more creative options in the game’s building phase. It’s also a step towards developer Freejam’s ultimate goal: making Robocraft a hobby, not just a game where people rock-and-sock their mechs.

“Robocraft is an activity. It’s building with blocks and bringing it to life. In the future we’d love to realise that vision where Robocraft is much more than building colourful robots and battling in a World of Tanks-style simulation,” explains Mark Simmons, CEO and game director at Freejam.

If you’ve yet to investigate Robocraft, it’s a game of two halves: one where you clip together blocks from a selection of hundreds to create a robot of your own design, and another where you take that robot to do battle with other players. Developer Freejam are a young British studio made up of guys who worked on a failed pitch for a Minecraft handheld port, and turned their love of the block-builder into something new. 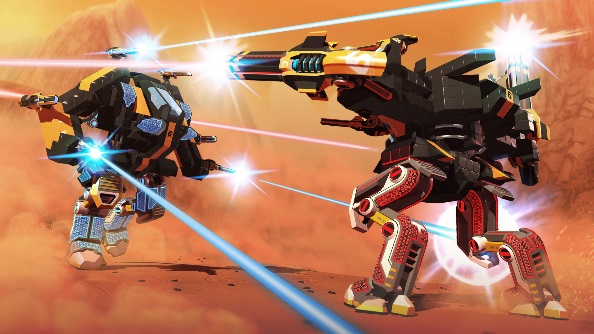 For their first game away from big studios and publishers (such as Sony Computer Entertainment Europe and Climax Studios), Robocraft is ambitious and, as a free-to-play MMO, entering a crowded marketplace. But from early in development, Simmons knew it was the path they had to tread: “The logic was: if we’re going to become a successful studio and grow into a larger studio, then the game has to be really big. It can’t be a little niche thing,” he reveals. “So we felt a User Generated Content game, where the users made their own content, would be a way to make the game much bigger than us.”

Freejam’s founders already had a basic block-building, physics-based prototype, but after deciding that free-to-play was the route they wanted to go down, the idea for an MMO where players could show off their designs to each other was born. “All kids want to make spaceships, right? All kids want to blow the crap out of other people’s spaceships. That seemed like it could be really big, so that’s when we all got excited,” enthuses Simmons.

Going free-to-play and Early Access meant something very important for Freejam: they could experiment and iterate. “We couldn’t afford to take the risk to spend two years developing a game that could fail. So we had to find out if we were going to fail as quickly as possible,” he explains. “We read this book on the ‘Lean Startup’ which was a small startup methodology based on building minimum viable versions of things, releasing them quickly to a small audience, iterating, and learning from the audience reaction. We’ve done that since the beginning and we’re still doing it now.” 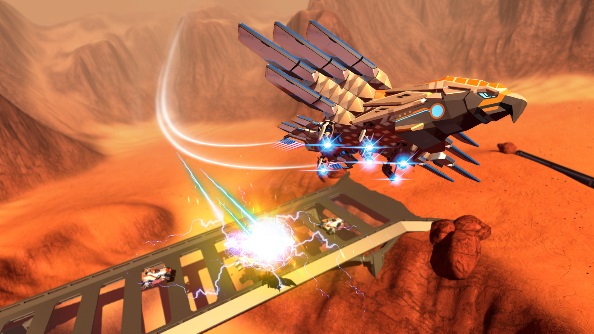 The approach is inspired from the team’s time working in console development, where tight budgets and shock deadlines meant they had in the past put out work they weren’t fully pleased with. “You feel bad in the end, too: you know people are buying that product at full console price and you know the quality’s not there. And inside that makes you feel bad.” Working in an early access, free-to-play environment released them from those constrictions.

Aside from the increased freedom and chance to iterate, free-to-play also felt the most honest approach to Simmons. “We thought we’d never get people to spend money unless the game is engaging. It just feels a much better way of getting people to play, because they can genuinely play the game, and decide if they enjoy it before parting with their cash.”

After a slow start that was eventually rocket-propelled by YouTubers covering the game in Poland, Russia, and Japan, an alpha version of their game in constant flux is currently played by thousands. The game now has a bustling, enthusiastic community, which Freejam are in ongoing dialogue with as they plan updates. “What they want more than anything is more stuff. More guns, more functional parts, more maps, more features. They want more,” says Simmons.

And that’s exactly what’s in Robocraft’s future. Eventually the game’s complicated tech tree will be entirely eradicated, which will lead to a very different approach to creating new components. Currently the multiple tiers mean Freejam have to create 11 different variations of a single component, gradually increasing in power for each tech tier the player progresses to. With this system scrapped, Freejam can focus on creating lots of different items, rather than multiple versions of just one. The goal is for a broad, exciting range of components and weapons. 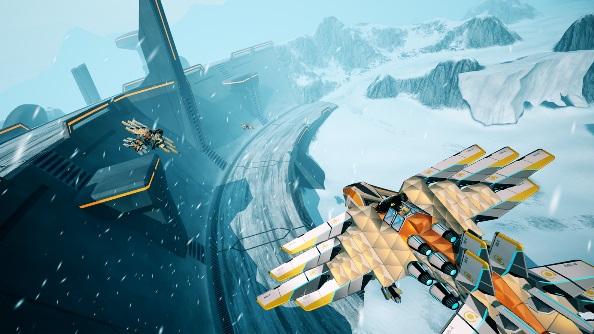 Right now though, it’s all about colour. “When we started out we decided that colour would equal armour, and that was a mistake that we made,” explains Simmons. “Many players who wanted to be creative would mix the colours and then make really rubbish robots and have a terrible time. Now you can literally colour your robot with a paint tool and you can colour it any way you want. If you want to make a robot that looks really cool, if you want to make the Millenium Falcon or an X-Wing fighter or Wall-E or something like that, then you should be able to make it and it should not suck in combat.”

Joining the new colour tool in the Full Spectrum Combat update is the opening up of Battle Arena, Team Deathmatch, and The Pit game modes for all players from the moment they start playing. When in these games, a new health regen system will restore destroyed components if players stay out of combat for a while, adding a little more tactical depth.

The Community Robot Factory, a system where users can upload their designs for other players to use, is also getting a tweak, changing from a rental store to a purchasing system. Players will be able to buy robots from the Factory with the in-game earnt RP currency and make modifications to them. “This is part of a drive we have to allow you more flexibility, and helping those people who struggle to build really battle efficient robots some opportunity to enjoy the game and learn how to build good robots by first buying other people’s,” explains Simmons. 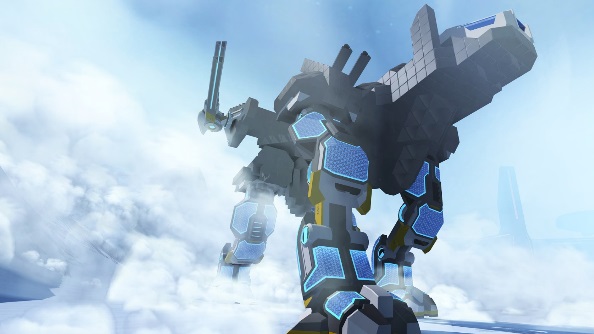 The update is one of the biggest Freejam have ever done, but it’s clear that this is tiny in comparison to their dreams for the Robocraft project. It started out following Minecraft and World of Tanks as inspiration for its build and battle modes, but those training wheels are being left behind. “We now feel our initial follow of World of Tanks was a mistake, but we’d be hard pressed to say it didn’t get us to where we are now. It certainly helped us in the early days, but getting away from that to something that’s more Robocraft is what this next couple of launches is all about. We can finally break free and start to broaden the game,” reveals Simmons.

The evolution of Robocraft lies in making it much more about fighting mechs. The studio plan to add non-combat modes like racing to the game, and the complete destruction of the vertical tech-tree will allow far superior creativity right from the moment new players sign in. “For us Robocraft is an activity where you build with blocks, bring it to life with physics, and do many different types of activity. It’s almost like a hobby. Digital Lego is our vision, not World of Tanks meets Minecraft.”