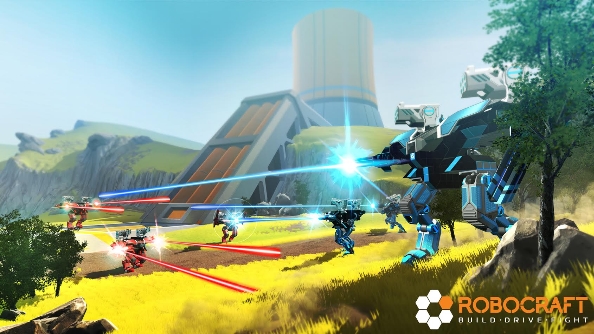 Robocraft has been augmented with its latest new component today with the new, free ‘Battle for Earth’ expansion. Adding a new game mode and an Earth-set map, the update also helps players personalise their in-game selves with avatars.

Play on without spending a penny with the best free Steam games.

The new mode is a classic: Team Deathmatch. Robocraft has previously had a mode by this name, but that single-spawn game type has been renamed ‘Elimination’ in order to make way for a more traditional take on Team Deathmatch. Now it’s a 5v5, multiple respawn, 10-minute match where teams must secure the most kills.

The mode can be played on the new map: Birmingham Power Station. Yes, Britain’s second city has made its videogame debut, but there’s not a Bullring or Custard Factory in sight. Instead it’s a smaller map dominated by cooling towers, and lacking capture points or other distractions. It’s been designed by the artist (a brummie himself) to encourage players to grasp the nuance of Robocraft’s combat.

Joining these two major additions is the new avatar system, which allows players to choose an image to display by their names on menus, leaderboards, and above their robot in combat. Premium members can upload their own design rather than choose from the dozens of pre-set ones.

Platoon sizes have also been updated, with groups now consisting of five instead of four members.

To get involved with the new modes and changes, just grab Robocraft from Steam for free and start playing. If you use the promotional code BATTLEFOREARTH you can also grab 24 hours of Premium membership.