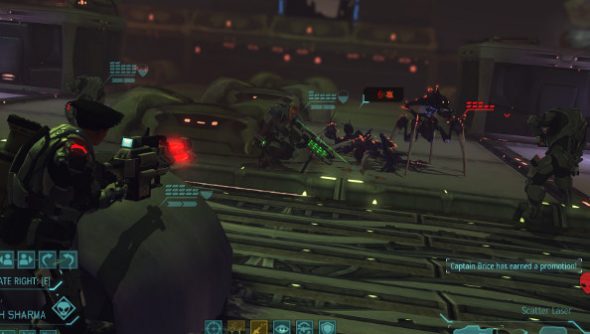 XCOM is about living with your mistakes.

Not many games encourage you to do that, to look at the bloody aftermath of a colossal cock-up and simply get on with the mission. Even without Iron Man mode enabled, in which XCOM manages saves so that everything is permanent, trying to cheat your way out of XCOM’s consequences feels like cheating yourself.

My elite assault trooper was really ambushed by deadly Chryssalids, and he really did use his final action to throw a grenade at the pack rather than try and run and save himself. He really was eviscerated, and a moment later my top sniper really did have to take aim at the shambling, zombified corpse of his former comrade, the last surviving member of their original squad of four, and shoot him in the head. All of that really happened, and somehow, reloading would just be a lie.

The shot stabs out. The zombie tumbles to the ground. We carry on.

It’s not a complicated game. A handful of clear-cut character classes with special abilities, a choice between a move and an action or a double-move. The challenge in XCOM isn’t figuring out how to play it, in keeping with Firaxis’ long tradition of accessibility.

And yet this is still a game where I find myself sitting for several minutes, staring at my squad arrayed around the battlefield like little animated chess pieces, trying to figure out the correct way to apply all these simple rules and straightforward odds. It doesn’t seem so simple or straightforward when I have two wounded soldiers in immediate danger of getting killed, a single medic separated from them by a deadly Cyberdisc’s field of fire, and another veteran being mind-controlled by an alien psychic. Who do you try and save, and in what order? There’s still an outside chance that everyone comes home alive from his mission, but it might be safer to admit that those two wounded comrades are doomed, and focus on salvaging the remainder of the squad.

It’s not easy being that coldly rational, and XCOM seems designed to undercut my detachment. I just can’t help myself, you see. Childhood friends, family members, colleagues, favorite authors… all of them have found their way into my games of XCOM. Suddenly they aren’t just chess pieces. They’re people, heroic avatars of the people who comprise my life’s experiences. I cheered when Captain Tim “Nova” Edwards spun around and blasted an enemy Floater to pieces with a single shotgun blast, then charged forward and cut down a monstrous Muton with another such blow.

And then minutes later I was horrified when he was mind-controlled, and some useless rookie coward shot him straight through the head in a blind panic.

I have thrown away three troopers in an effort to save a single mind-controlled veteran who just happens to be named after a favorite drinking buddy. My best support trooper was sent on a suicide mission to resuscitate my girlfriend before she bled out on the deck on a spaceship. She died so that my girlfriend could live… for two more turns until a misfired rocket impacted against her cover and killed her instantly. Having spent so much time with XCOM, I’ve become more aware of its faults and limitations. UFO missions become repetitive and almost rote, since there are so few UFO layouts. There aren’t enough maps to go around, and it didn’t take long before I could identify each map at a glance. That doesn’t mean there are no surprises, but it’s disappointing to begin a mission and know, immediately, where the snipers should try and get to, and where the heavy should set up an overwatch position.

The campaign is too linear, meaning that as unpredictable as the missions are, the overall campaign structure is almost ritualized by the third playthrough. You know what’s coming, you know what equipment you want, and you know that most major missions will wait until you are good and ready to undertake them. Even worse, Firaxis’ support for XCOM has been upsetting: multiplayer is still buggy, laggy, and borderline unplayable months after release.

These flaws detract from an extraordinary experience, and it’s a measure of just how good the combat is that the repetitive, structured campaign doesn’t detract from my desire to play more of XCOM. Even now, I feel I’ve only really begun. I’ve mastered the normal difficulty setting with Iron Man mode enabled, but Classic difficulty and its lovingly nostalgic cruelty remains unconquered, atop a mountain of corpses left over from my failed attempts to overcome it. It’s not just that XCOM gets harder on Classic, but that it becomes an entirely different game, demanding in new and frightening ways. 2012 has been a superb year, the best I’ve seen since I started writing about games. My hard drive right now is an embarrassment of riches, and I have wasted far too much time trying to puzzle out which of 2012’s great games I want to play. But more often than not, the answer has been XCOM. We don’t get too many turn-based tactical games these days, and certainly not ones as polished and lovely as this. 2012 gave us many great games, but XCOM put an entire genre back on the map, reminding us once again that cerebral, turn-based strategy games can create the kind of drama and tension that stays with you long after you’ve stopped playing, when you have a moment to think about your victories, and regret your mistakes.