Ultralight gaming mice are becoming more popular with the edge they give in competitive FPS games, but options get a little thin when you also want to ditch the cord. Roccat’s wireless Kone Pro Air weighs in at just 75g, and while it’ll set you back a costly $129.99 / £119.99, it has the specs and quality to match its high price tag.

It’s not the lightest or cheapest wireless gaming mouse out there, with the SteelSeries Aerox 3 Wireless coming in at just 66g for $99.99 / £99.99. Much like the similarly priced Logitech G Pro Wireless, however, it is one of the only featherweight wireless gaming mice to seemingly forgo the honeycomb design, which isn’t to everyone’s taste.

Instead, Roccat hides the honeycomb layout underneath a layer of solid plastic, helping the Kone Pro Air undercut the G Pro Wireless by 5 grams. This makes the mouse much easier to clean and even gives it a more distinctive look than most, as RGB lighting shines through the left and right clickers.

There aren’t many changes in ergonomics compared to the Roccat Kone Pure Ultra, but why try to fix what’s not broken? The Kone Pro Air is as comfortable as ever, sculpted to slot into the palms of right-handed gamers – lefties are better off with Logitech’s asymmetrical G Pro Wireless. I personally find it snug for long gaming stints in both a palm and claw grip.

Getting to such a low weight usually comes with compromises, but Roccat seems to have cracked the code with the Kone Pro Air. Despite a plastic design, it feels solidly built with no rattles, and its hollow aluminium scroll wheel looks and feels great. 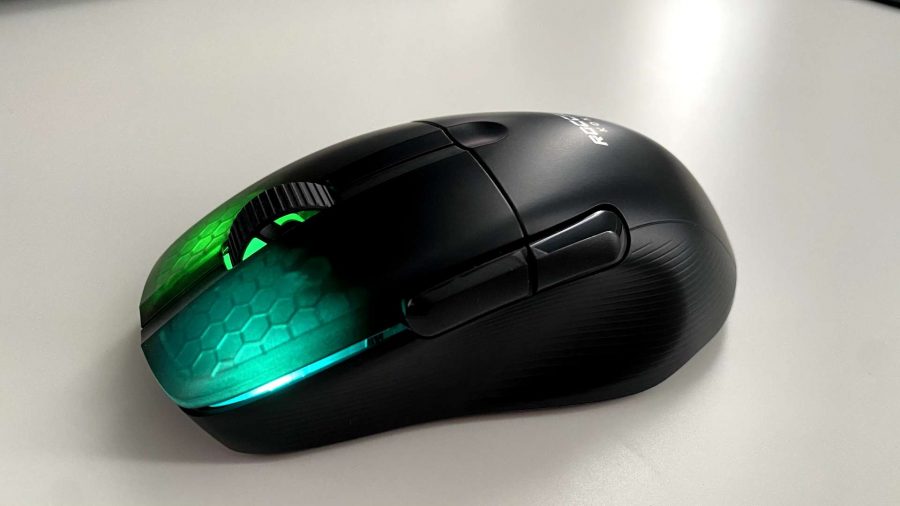 The 2.4GHz wireless dongle is hidden away in the base of the mouse and provides the lowest latency, but it’s as easy as flicking a switch to connect via Bluetooth if you want more compatibility options. The braided USB Type-C cable is long enough to use while recharging, although it’s not something you’ll be doing often with a rated battery life of 100 hours.

Even with daily use, I find myself going around a month between recharges. You won’t be caught short either, as the fast charging tech gives five hours of play from just 10 minutes of charging. 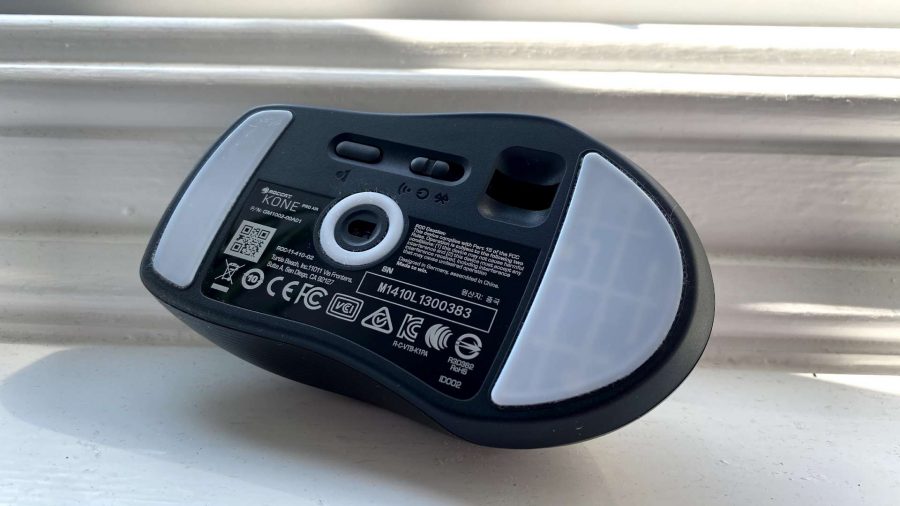 There are two side buttons on this rodent, and you can change their actions through the Roccat Swarm software. It’s a shame there isn’t a dedicated DPI switch, however.

The only alternative if you want to swap sensitivity on-the-fly is to use the profile button on the bottom that lets you cycle between five custom profiles, which can have differing DPI levels as well as custom macros. You’ll need to change the RGB lighting on each one if you want visual confirmation of your current profile, though, which comes at the expense of your setup’s colour coordination. A flash of your profile’s colour before returning to your chosen lighting is a solution we’ve seen from SteelSeries, and is something that could come via an update to the software.

It uses Roccat’s Owl-Eye optical sensor, with a maximum DPI of 19,000. Along with adjustable lift-off sensitivity, this makes it the perfect sensor for playing games at a competitive level. Logitech’s HERO 25K sensor might outpace the Owl-Eye when it comes to the DPI ceiling, but I’ve yet to meet anyone that uses the full whack in-game. 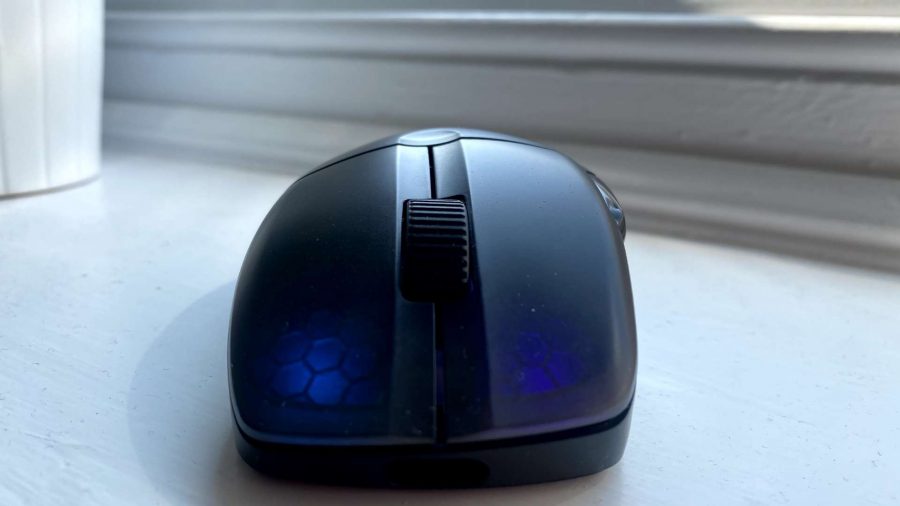 The Kone Pro Air maxes out at a 1KHz polling rate, but there aren’t any 8KHz wireless models yet. That space is only occupied by wired models like the Corsair Sabre RGB Pro and Razer Viper 8K.

Both clickers use optical switches for near-zero latency, giving a nice audible press akin to the best gaming keyboard. PTFE feet on the bottom, combined with its low weight, means this rodent glides effortlessly along mouse pads, too.

Roccat’s Swarm software is noticeably less polished than its rivals like Razer Synapse and the Logitech G Hub, with a messy layout and textures that don’t scale well onto 4K monitors. Despite this, it still does everything you’d expect in order to get the most out of the mouse. You can set macro profiles on a per-game basis, remap buttons, customise the RGB lighting, change lift off sensitivity, and more. 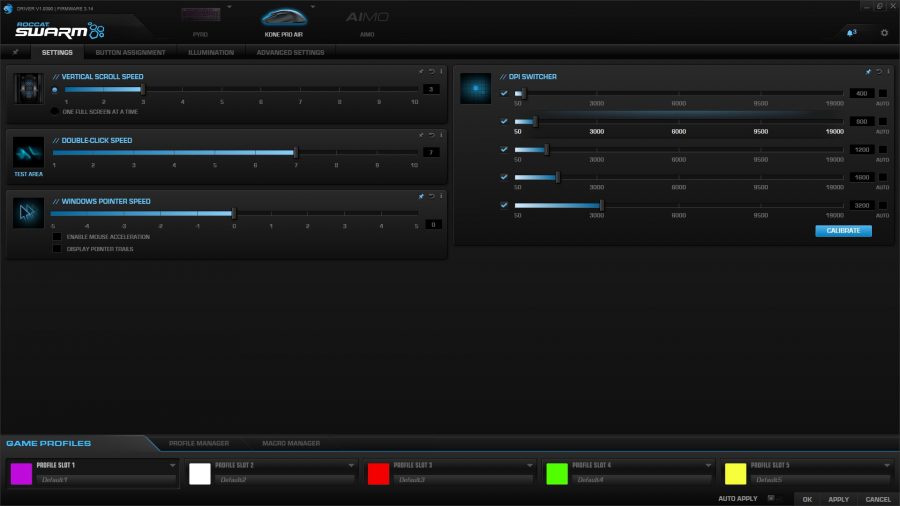 The RGB lighting system works impressively on its keyboards, but the AIMO mode, which reacts to your behaviours, doesn’t translate as well onto the two small RGB lights within the clickers. It’s nice and bright, though, and you can synchronise it with any other Roccat product you own. Switch off the lighting entirely and there’s no real hint that the mouse is designed for gaming, which may be preferable for those going for a stealthy setup.

With a similar spec and price to the Logitech G Pro Wireless, the Kone Pro Air is a stylish cordless option with unrivalled levels of comfort for right-handed gamers, a noticeably low weight, and an accurate optical sensor. The software is a little clunky, but it still covers all the bases, and the built-in lighting adds a little flair. While it’s a unique design, those who want more of an RGB extravaganza that stands out on their desk will want to look elsewhere.

The Kone Pro Air combines a high-DPI sensor and low-latency wireless connection into an extremely comfortable and lightweight shell. However, an 8KHz polling rate could've added further to its competitive nature and its accompanying software isn't as intuitive as rivals from Razer and Logitech.