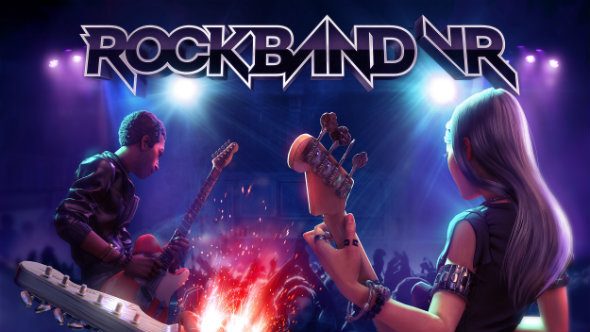 Rock Band VR has been demoing at various trade shows for a while, and it’s pretty excellent. Best news then, as we won’t have to wait long to fire it up at home as Harmonix has just announced the release date of this virtual superstar simulator, hitting store shelves on March 23.

Rather shoot virtual enemies than jam in front of a heaving crowd? We’ve cherry-picked the very best VR games around.

It appears that the game will initially only launch with support for the Oculus Rift, so HTC Vive owners won’t be able to jump around the stage like an elderly Mick Jagger. However, it does make the most of the Rift’s head tracking, so players will still be able to engage in a bit of head-banging to score bonus points whilst rocking along to the 60 tracks included with the game.

Along with the classic game mode, a new VR mode allows you to experiment with different chords, notes and strum speeds – this is what I got to try during my demo. While I was about as good at playing the virtual guitar as a one-armed chimp, the sense of being in a live music venue in front of a frothing crowd was simply amazing.

You’re going to need a Rock Band guitar, Rift HMD and Touch controller to play the game, which makes it the most expensive Rock Band experience yet, though it was never the cheapest gaming experience around.

Pre-orders are live now for the March 23 launch date from the official site.