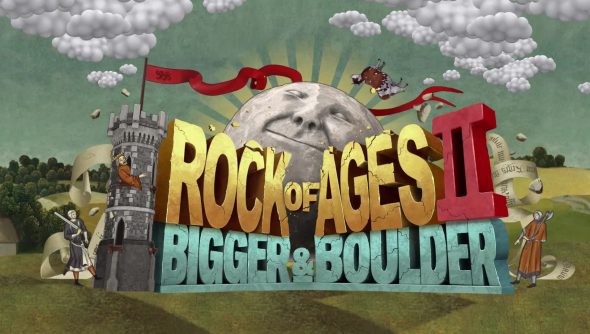 2011’s Rock of Ages was a good of two parts – the game was a mix of strategic base defence with rolling huge smiling boulders are your enemies. I loved it, but I suspected we’d probably never see anything like it again. It was too quirky, too odd.

For more multiplayer carnage, see our list of the Best Multiplayer Games.

I was wrong, I am sorry. Rock of Ages 2: Bigger and Boulder (really) is coming, and should be here in the autumn. It was announced earlier this month, but much like PC Gamer who I got wind of the sequel from, we didn’t notice it until they released their E3 trailer.

ACE team are back behind the wheel again, and it’s going to be published by Atlus.The best thing about the trailer is it confirms the game hasn’t lost its sense of humour. I can’t make too much sense out of what’s going on in terms of gameplay, but I chuckled to myself a few times, and that is what’s important.

It’s being built in Unreal Engine 4 and the extra grunt means more physics and more things to trash with your hulking boulder. It sounds like absolute carnage, and Atlus promise in a press release “it’s the most fun you can have rolling rocks down a big hill!”. I’ll be the judge of that, Atlus.

The multiplayer aspects of the game are being much improved, with up to four players able to do battle in a 2 v 2 match. The tracks also come together now, so you’ll be able to hit the enemy rocks head on when the courses intersect just to mess with them. Let’s just watch the trailer.