Here’s a thought experiment: imagine a rockets-only Quake deathmatch. Now, make the projectiles do no damage, so you can engage in non-stop rocket-jumping. Pull in a colourful set of heroes with some unique powers, Overwatch style. Now, add a scoring system where you win by knocking opponents out of the map, just like Super Smash Bros. By now, you should have a pretty clear, if hectic, image of what to expect from Rocket Arena, and – in pick-up-and-play sessions, at least – it’s as much delightfully chaotic fun as that combination of inspirations suggest.

Rocket Arena is the latest project out of the EA Originals programme, the company’s indie publishing initiative. Developer Final Strike Games – built by veterans of games like Call of Duty, Halo, and Gears of War – has been working on the multiplayer title for years under other publishers, and you might’ve already played it in a vastly different form. Since the early betas, it’s been reworked from first-person to third-person to offer a better way to track your position in the mayhem-filled matches.

Every character on the roster is equipped with a variation on the rocket launcher, from traditional, straight-line rockets to grenade-style lobs or smaller explosives fired machine gun-style. They all let you rocket jump, over ground and up walls, on top of generous mid-air double-jump options. Instead of damage, getting hit by enemy rockets will knock you back and fill up a blast meter – the higher the gauge, the further you get knocked back, until eventually you get launched à la Smash Bros. out of bounds.

Between the multi-jumps and rocket jumps, you’ve got loads of recovery options when you are struck toward the knockout zone, as well as a recharging invincible dodge that you can use to avoid a rocket or break a stagger. This adds a ton of dynamism to every encounter with enemy players – you’re dodging in and out of rocket trajectories, trying to lead your shots just right as your opponent does the same, and lining up that final shot to fully knock an enemy out of play is always extraordinarily satisfying. 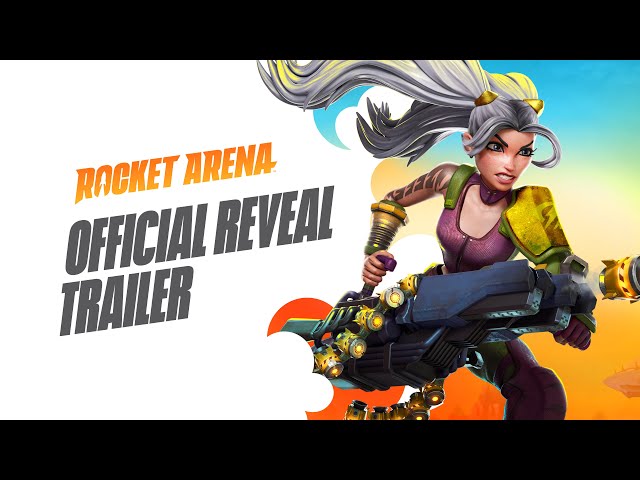 Rocket Arena’s main modes are built for 3v3 team play in small arenas with short matches, which helps constrain the action and keeps things moving fast. The highlight of the modes during the preview event was Knockout – pure team deathmatch where both teams race to score KOs. This puts the game’s focus where it’s best: those tight contests of manoeuvring and rocket-launching skill.

The other two modes previewed (a total of five are planned for launch, including one PvE option) are fun, but more about layering coordinated teamplay over that core rocket launcher dance. In Treasure Hunt, both teams race to collect and defend a treasure chest at the center of the map, racking up points as long as an allied player holds it – between rounds, coins spawn around the map, offering a chance to buoy your score and enhance your lead or mount a comeback. Rocketball, meanwhile, is pretty much Rocket League – a high-flying version of soccer where each team races to be the first to five goals.

Team up: The best co-op games on PC

This is where each character’s unique abilities shine, too. The big, bearded pirate has a set of abilities for knocking enemies back and pushing them away – perfect for serving as a goalie in Rocketball or defending the chest in Treasure Hunt. Other characters are built for quickly manoeuvring around the map, or for building chaos to suppress the enemy team. 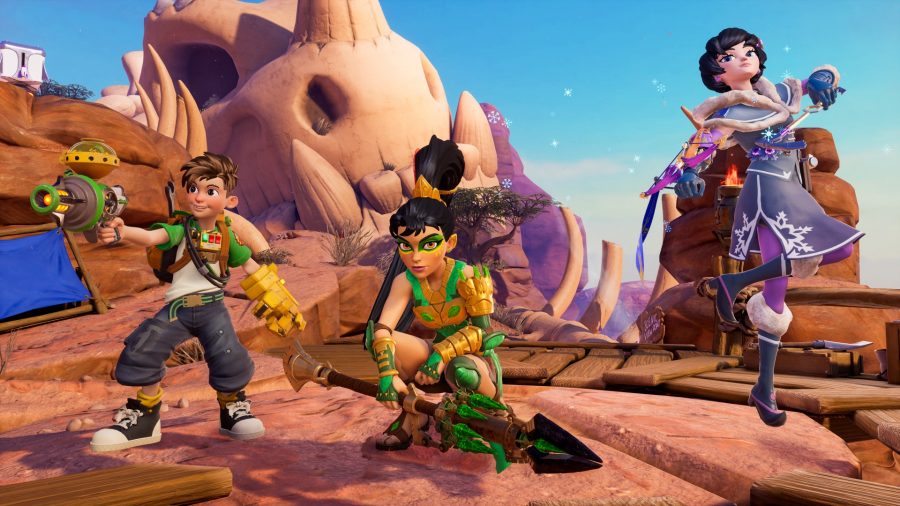 With the enhanced focus on coordinated team play, those modes offer a hint of what the skill ceiling on Rocket Arena might look like, but the game’s long-term prospects remain my biggest question after the preview event. Here, the Smash Bros. comparison comes up again.

The game is terrific fun in quick bursts at a low level, but some of the design elements that make it so – like randomised power-up items that spawn around the map – seem at odds with the sort of competitive community a game of this type needs in order to stay relevant. Smash walks that line somewhat uneasily, and it’s going to be some time before we learn if Rocket Arena can do the same.

There’s both casual and competitive play, which should help Rocket Arena find the balance somewhat. One of the big differences is how the game treats its Artifacts between the two modes. These are equippable items that add bonuses like reducing cooldown times when you make KOs, or increase your base movement speed. In casual, you unlock these items by playing and can level them up into more powerful versions. In ranked, they’re all unlocked from the start and offer only a single bonus at a single level of power. 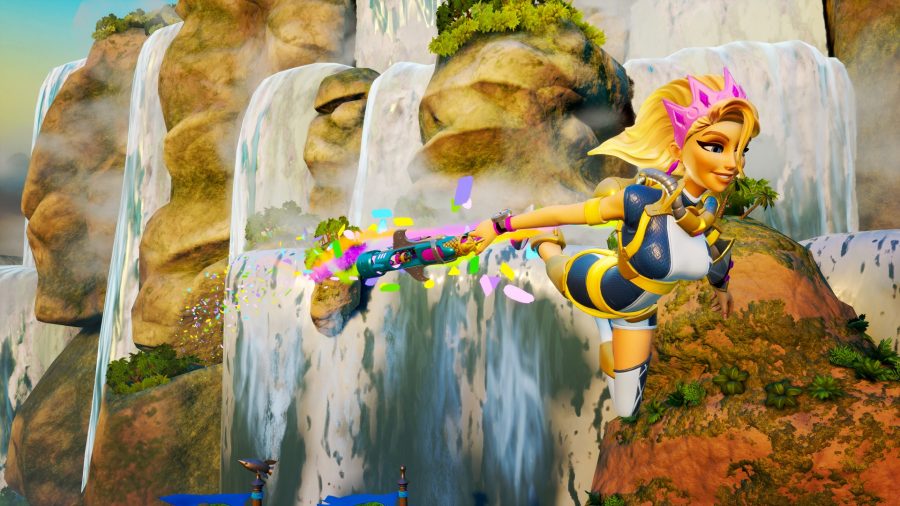 Rocket Arena will not be free-to-play – instead, it’s launching at a base price of $29.99 USD, supported long-term by a seasonal battle pass system and purely cosmetic microtransactions. Those cosmetics aren’t looking especially impressive, as the preview build only offered up a handful of minor recolours. Less incentive to spend extra money isn’t necessarily a bad thing, I suppose, but that also means there’s less incentive to spend extra time.

Rock on: The best FPS games on PC

I’m confident Rocket Arena is going to provide a great time on its launch day of July 14, though I’m less certain about how the game’s prospects will look, say, six months later. At a basic level, though, Rocket Arena offers wonderful mobility and its intense PvP rocket battles are extraordinarily satisfying, mixing a lengthy list of recognisable inspirations into a new soup that feels unique.