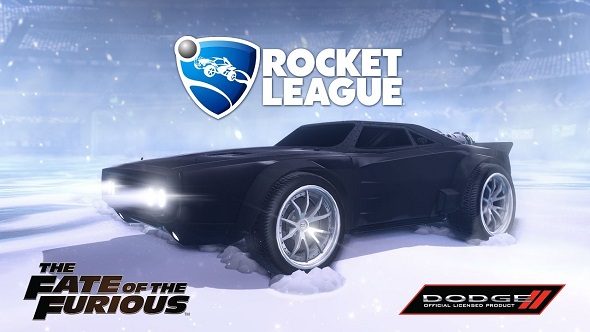 Joining the DeLorean from Back to the Future and the Batmobile from Batman vs. Superman, the Dodge Ice Charger from the upcoming The Fate of the Furious is the third movie tie-in vehicle coming to Rocket League. Driven by Vin Diesel’s character Dominic Toretto, this jet black muscle car will be joining the garage on April 4.

For PC petrolheads, check out our list of the best PC racing games.

Available for $1.99, the Charger will come with six decals named Clean Cut, Crazy Sandwich, Flames, Rakugaki, Rally, and CCCXL. With The Fate of the Furious coming out in cinemas on April 14, this DLC is certainly one way of marketing the movie. I’d personally have preferred something from Tokyo Drift but we can’t have it all.

The Charger has been seen in a trailer for the movie, with Dom using it to jump over a submarine. While Psyonix have yet to announce a submarine DLC (it’s April Fools, there’s still time), the Charger will certainly have its suspension tested when it hits the pitch next week.

Speaking to IGN about the partnership with Universal and Dodge, Psyonix vice president Jeremy Dunham said that making the deal was easy “as all of the studios we’ve dealt with do play our game and are fans of it.”

The first tie-in with Universal for Doc Brown’s DeLorean was actually a stroke of serendipity, with a “Universal Pictures brand manager coincidentally reaching out to [Psyonix]” just as they were discussing adding the car to the game.