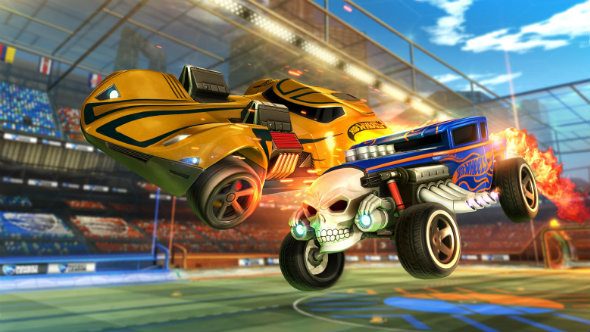 Most of you will probably have fond memories of playing with Hot Wheels cars as a kid, and now you’ll be able to relive them while indulging in a round of Rocket League. The two companies have just announced that the latest Premium DLC pack introduces two Hot Wheels cars into the game.

Fancy driving around a racetrack at high speed rather than smashing a ball into a net? Here are our favourite traditional racing games.

The new cars will debut on February 21, and will be sold separately for $1.99 a pop. First up there’s the Twin Mill III, a blazing yellow car that looks like a Corvette from the future. Then there’s the slightly more sadistic Bone Shaker, an old-school Hot Rod with a giant skull adorning the front. Each car comes with exclusive wheels and six decals, but you don’t necessarily have to buy the DLC to get your Hot Wheels fix. At the same time, the base game will receive free Hot Wheels Antenna and Topper, “Treasure Hunt” flag and “Shark Bite” Topper, but you’ll only be able to score them if you’re lucky, as they’ll be random post-match awards.

At just $2 each, these virtual Hot Wheels cars are even cheaper than the real deal, but promise to be more fun than staging miniature automobile accidents in your backyard. You can read the full announcement at the official DLC page.