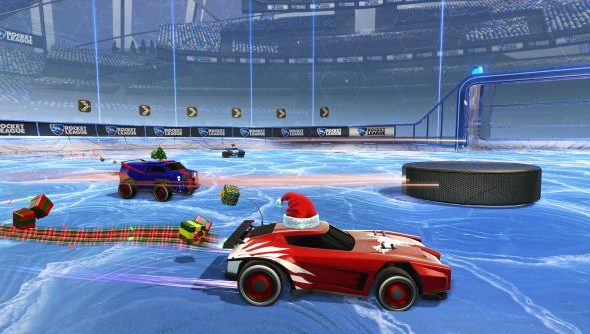 Psyonix have announced that Rocket League’s previously announced winter-focused DLC will be going live on December 14th completely for free. The update includes a number of cosmetic items and a new game mode using the mutator system that debuted last month. In it, the ball is replaced with a puck, ice has frozen underwheel and everything’s a lot more chaotic because of it.

Phil spoke to Psyonix about the making of Rocket League.

While hockey-mode, called the Snow Day mutator, will be available immediate, the cosmetic items are earned via random drop between December 14th and January 1st. If you don’t manage to grab them – which is possible as a rare drop after the completion of any match, win or lose – it will be next year before you can earn them again. Here’s the full list of what’s available:

If you’d rather pay money for things for some reason, there’s also some paid DLC coming on the 1st of December called Chaos Run, focused on a Mad Maxian post-apocalyptic aesthetic. It’ll cost you $3.99, here’s a trailer: