Another year, another RuneFest. As per usual, Jagex have announced a heap of updates that they’re planning to roll out for the now 15-year-old MMO. In line with the developer’s long tradition of improving their game with the help and advice of their players, the bulk of inbound features, add-ons and reworks were led by a community survey, which elicited responses from thousands of players – from lapsed and casual fans of Runescape to high-level veterans.

For more massively multiplayer gaming, check out the best MMORPGs on PC.

That survey revealed that the most requested changes to the game are reworks of current systems or locations, which made up four of the top 12 most wanted updates. Another

survey also asked the Runescape community how they felt about Jagex’s approach to updates, and found that players wanted a change of direction from the very regular update cycle that the game currently receives. They also wanted bigger updates, and Jagex have obliged. But before we get onto the seismic shifts that await players next year, let’s first cover everything that Jagex have announced for Runescape in 2016. 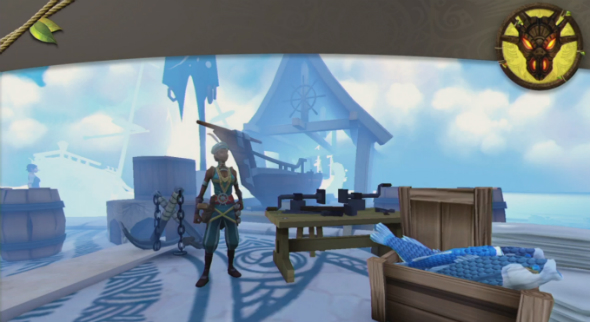 Travelling around the Arc will be made much easier with the release of the second part, with massive reductions to supply costs and increased discovery of key resources helping to make exploration around uncharted islands more accessible.

One of the key issues of the Arc’s first part was that it had a closed economy, meaning that there were few rewards that players could take outside of the area and into the main game – this is being addressed in Chapter two with tier 85 boots and gloves for the port armour set, new tools for the invention skill and a new five-piece hunter outfit. Obviously the other major part of the expansion is the addition of four new named islands. So more to explore, more to take outside of the add-on and easier travel around the islands themselves.

Jagex’s holiday celebrations have provided some of the best moments in the MMO’s long history, and their plans for Halloween this year seem to be following suit. While not much was revealed, Jagex did allude to a focus on the invention skill, and in particular, crafting armour out of body parts and flesh. 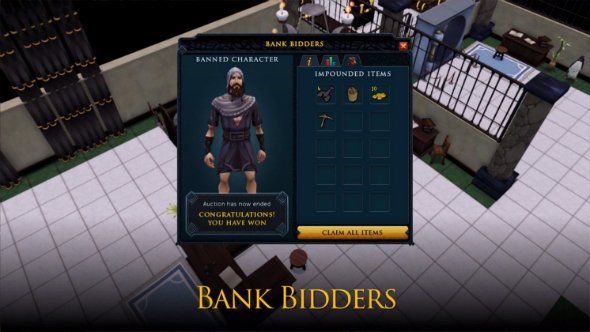 A Storage Wars-inspired feature that will let players bid on the contents of banned players’ in-game bank accounts will launch in November. Its announcement at RuneFest 2016 elicited probably the greatest response of any reveal at the event. Players will be able to glimpse a few key details about the banned player such as what they spent their time doing, what level they were and what they looked like when they were banned before an auction on the contents of their account begins.

An early concept of the feature showed the that players could get lucky and receive millions of gold pieces and some of the rarest items in the game… or they could get some lovely cooked lobsters and few oak logs. Jagex said the feature was being made with streamers in mind, and that a special high roller version might be made exclusively for this purpose. 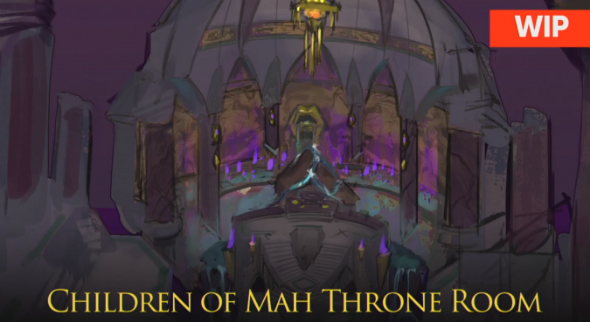 The announcement of a follow-up to the hugely popular Fate of the Gods quest received plenty of applause during RuneFest 2016. Jagex revealed that the quest would focus on a clash between two of Runescape’s most famous Gods, Zaros and Zamorak, and will take place in a new area: the homeworld of the Mahjarrat.

Children of Mah will also feature a time-travel section, where players will be able to witness and even participate in the betrayal of Zaros by Zamorak, one of the key points in the lore of Runescape.

To open the quest up to as many players as possible, Jagex will be rolling out a special skill-boosting area in November that will help players increase some of the more niche skills in the game to meet the requirements of the quest. This area will be an archaeological dig at the site of the Throne Room, where the betrayal took place. A short quest line will await players, but will mostly involve digging in exchange for skill bonuses. 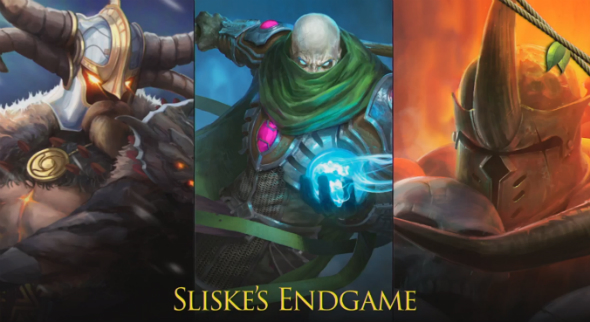 The conclusion to one of the biggest quest lines the MMO has ever received arrives in the form of Sliske’s Endgame. It’s fitting that the recommended completed quests are literally ‘everything’. Promising to be one of the most dynamic quests in the game, Sliske’s Endgame will be replayable and will react to a number of player choices made in the quest lines previous instalments as well as other side quests. Endgame itself will see Sliske tally up the points for his god-killing competition and invite the contestants to a final, and we’re assuming theatrical, event.

Almost nothing was revealed about plans for this year’s Christmas event, but Jagex did announce that it would be themed around the game’s 15-year anniversary.

The biggest change coming to Runescape in 2017 is a rework to how Jagex roll out updates. The community voted overwhelmingly in favour of having fewer, bigger expansions rather than smaller weekly updates. The result? Jagex unveiled what they call Runescape Expansions at RuneFest, which effectively means a new and enormous game area every three months starting in June 2017.

Jagex are promising an update that will add an area the size of The Elf City add-on – complete with quests and city hub features – four times a year. We only have details about the first, The Golden City of Menaphos, which will come out halfway through 2017. September and December will also receive an update of equivalent size.

While we don’t know for certain what those other two updates will focus on, a picture-heavy tweet from Runescape provides a teaser of what awaits us in 2017. 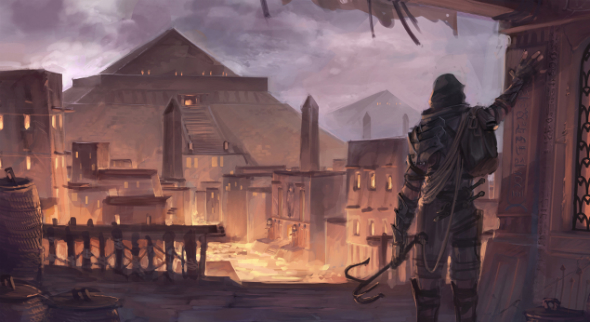 To tease the forthcoming Runescape Expansions, Jagex released a heap of details about their first add-on, The Golden City of Menaphos. You can watch a trailer for the expansion below.

The desert city of Menaphos has been a black square on the Runescape map for over a decade now, so a lot of fans were pleased to see that it would be the destination for Runescape’s next expansion. Unlike the harsh and hostile Kharidian Desert, Menaphos is more akin to an oasis city like ancient Babylon. The basic story that awaits players is that the pharaoh of Menaphos is actually a puppet of the corrupt goddess Amascut, who is busy tearing the surrounding area to pieces in search of her father. Standard RuneScape fare.

Amascut’s rumblings have, fortunately for the player, also revealed the Tombs of Menaphos, which is a unique dungeon that will favour the player’s knowledge of RuneScape puzzles and skilling rather than their combat abilities. Players will also come across a new god, Crondis, a devourer-type desert god who is consuming all of the city’s resources. Completing a quest will allow the player to enlist Crondis an ally to fight Amascut in the main pyramid that looms above Menaphos. That pyramid is, of course, a giant slayer dungeon full of creatures who want to kill and eat you. 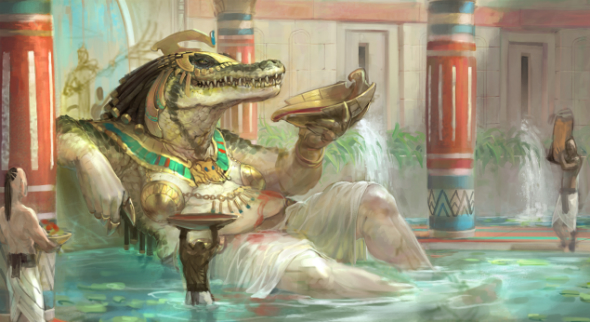 A series of smaller updates like new quests and combat updates within the new area will keep players engaged in the months between each major update. 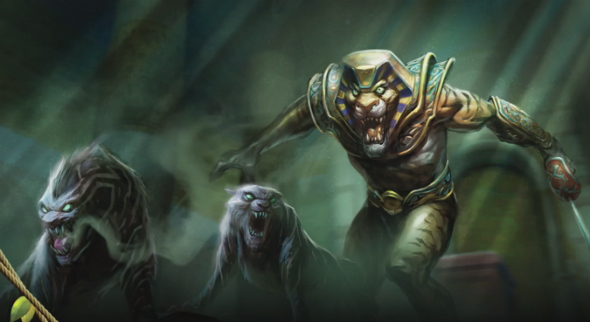 A sneaky closing announcement from Jagex at Runescape 2016 was the raising of the Slayer skill level cap to 120 as part of the Golden City of Menaphos expansion. Players who already have a virtual Slayer skill level of 120 will not be affected by the change and will keep their completionist capes. Players below the level 120 boundary will have three months after the release of Menaphos to reach the new maximum level.

This isn’t just a pointless level cap increase – upon reaching the new level cap, players will be able to become their own Slayer Masters, assign themselves Slayer Tasks and create their own monsters in dungeons. 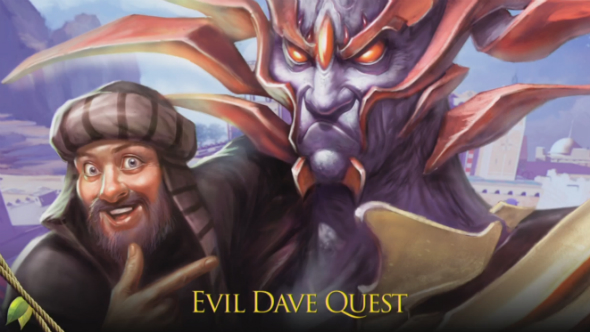 This quest was announced alongside a charming piece of concept art in which the titular Evil Dave is seen buddying up next to the god Zamorak. What exactly this quest will have players doing was not revealed, but seeing as all the quests Evil Dave has previously appeared in feature him magnificently failing to be evil, we can expect something similar from this outing. 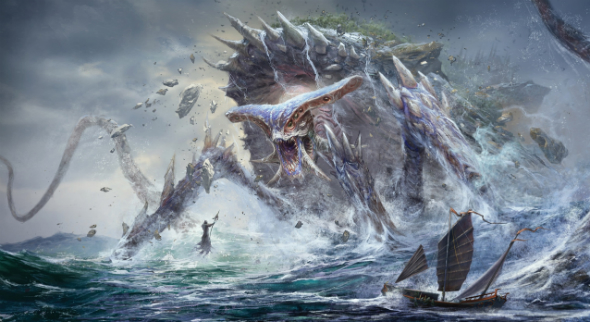 We haven’t heard as much as a peep out of Runescape’s Elder Gods, behemoth creatures that put the game’s humanoid gods to shame. Unfortunately, that’s set to change with the newly unveiled Elder Gods quest, which will see a number of the ancient leviathans rise up and start eating noobs. Essentially, the Elder Gods don’t like Runescape’s current inhabitants, and seeing as not even Runescape’s most famous deities can stand up to them, it’s up to the player to convince them that humans are an alright bunch, and find the Elder Gods an alternative home.

The most requested update of Jagex’s 2016 player survey was a bank update, and thankfully, a major overhaul is coming in 2017. Jagex have promised the new system will remain familiar to veteran players, but will include a number of helpful tools such as placeholder items, customisable tabs and colour coding.

Clue Scrolls are one of the more unexpected reworks coming to Runescape in 2017. Jagex want to make them more competitive, but also more rewarding. One way they plan to do that is by adding unique Clue Scrolls that contain a single, totally unique item that only one player can win.

We’ve known about Jagex’s planned mining and smithing reworks for a while now, but the developers shed some light on what those changes will cover during RuneFest 2016. Effectively, they want to make the mining and smithing skills a viable means of income in the game by reducing the skill level for Dragon and Rune items significantly. Jagex also want to bring the mining skill in line with the defence skill, so Runite ore would only require your skill to be level 50 rather than 85. Masterworks will also be introduced to smithing, which will allow the player to create more unique and buffed versions of the standard weapons. Similar to mining, smithing skill levels will also be reduced. 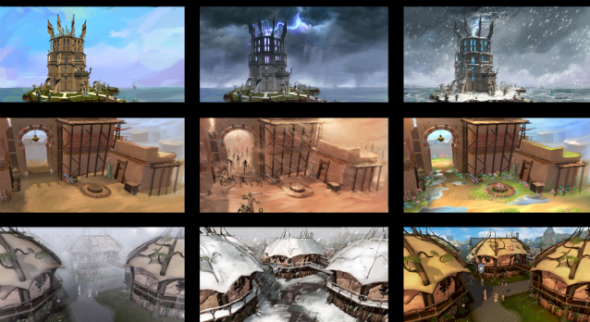 Finally, after 15 years Runescape is getting a dynamic weather system. That doesn’t just mean that it will occasionally get a bit rainy or sometimes the you’ll see snow on rooftops. Nope, according to Jagex, dynamic means thunderstorms that move around the map with columns of lightning that can be harnessed by mages. It also means sandstorms in the Kharidian Desert that might unearth tombs and zombies, cooling lava flows that could create pathways to new places, and monsoons that could create an oasis in an otherwise barren wasteland. Of course all of this is concept level, but Runescape has come along way since the sprite-based MMORPG it was born as. 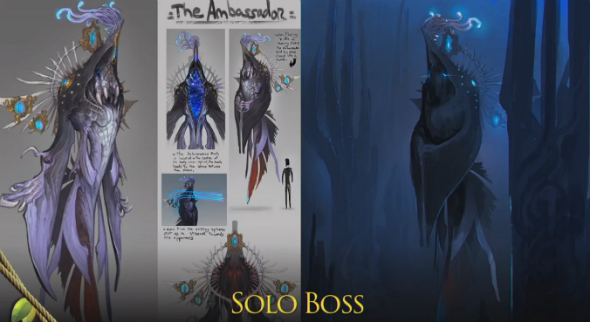 According to Jagex, solo bosses are one of the most popular content requests from Runescape players. And so in 2017, they’ll be releasing a new one, called The Ambassador. Only a single concept image has been released for the Cthulhu-esque sea creature, which looks suitably terrifying.

Pets, as in real life, are immensely popular in Runescape, but players don’t have enough ways of interacting with them. Roll on Pet Parks, a proposed update that will give players their very own space to keep every pet they collect. As a weird addition to that, players will also be able to give their pets tasks, like their very own animal workforce.

So there it is, everything you can expect from Runescape in 2016 and 2017. We’ll update you when we know more about a certain feature or update.