A new landmass is opening up on the map of Runescape, a mysterious island currently shrouded in fog if you open up your map. The new island is called Anachronia, and it’s home to some ruddy huge dinosaurs. To get here, you’ll need to help finish a ship that’s been under construction in the city of Varrock for 11 years, with that finished you can set sail for Anachronia where you’ll need to establish a base of operations, navigate a island-wide Agility course, and – yes – hunt some dinosaurs.

Old School Runescape players will recognise the landmass as Fossil Island, but in the warped timeline of Land Out of Time there are no fossils to be found, just massive beasts too big for players to take down through standard combat. To take down the island’s dinosaurs you’ll have to engage with the new Big Game Hunting activity, which sees you setting up traps to bring down these behemoths.

On top of this there are minigames to earn additional XP, a variety of quests, new Slayer creatures, a base camp to build and upgrade during your time on Anachronia, and ultimately craft either the new Hexhunter maul or set of dino hide ranged armour. We went hands-on with Land Out of Time to explore as much of the new landmass as possible, so here’s everything you can look forward to when the release date rolls around.

The most important detail: the Runescape Land Out of Time release date is July 8, 2019. That’s just around the corner, but Jagex aim to roll out the content over a few weeks rather than all at once, so expect a few weekly updates after the landmass initially opens up. 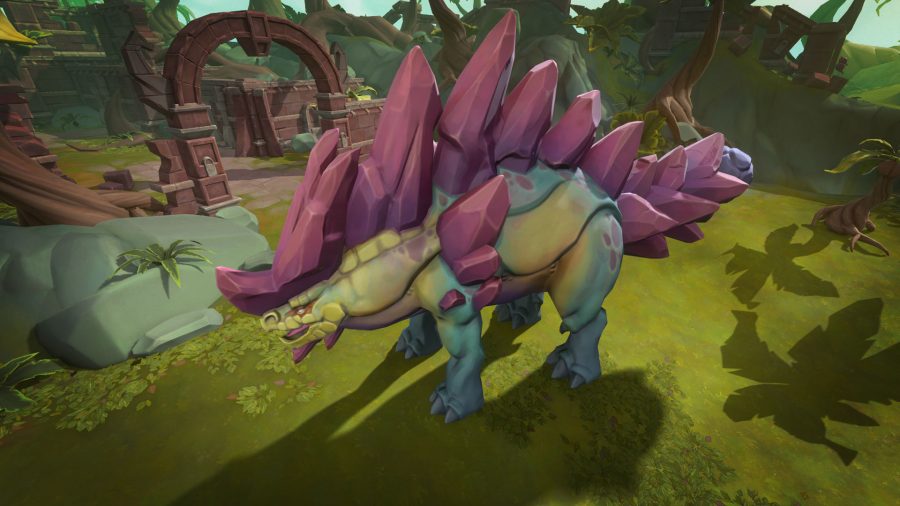 Anachronia’s massive dinosaurs can’t be beaten with melee, magic, or archery, so you’ll need to set traps for them. The new Big Game Hunting activity will train your Hunter skill through a minigame where you need to creep around a small arena avoiding the gaze of your dino prey, baiting them with their favourite meta while gathering materials and building traps.

You’ll need to gather wood and leaves from the outskirts of each area in order to craft darts, add poison to the darts using different frogs, then you’ll need to craft traps, load the darts, place them in the traps, and set it all off without being spotted by the target. You can either bait the dino three times, which is time-consuming, or load up all three traps for one big hit of damage. Either way, it gets very tense when you’re only a couple of steps away from taking setting off the trap and the roaming monster is pinning you into a corner.

You’ll need to use the new double Surge ability in order to outmaneuver these dinos – we found the most effective way is to run into their cone of vision and Surge out of it before being detected. If you get caught you’ll have wasted a good chunk of time and will need to start the event again. There’s also a chance you’ll be eaten, which can never be a good thing.

You can expect some dinosaur bones and hide for your troubles, the former may be used to craft the Hexhunter Maul or can be buried for a hefty chunk of Prayer XP, while the latter is a crafting material for the new ranged armour set. The activity as a whole will also grant heaps of Hunter XP. Hunter level requirements range from level 75 to 96. 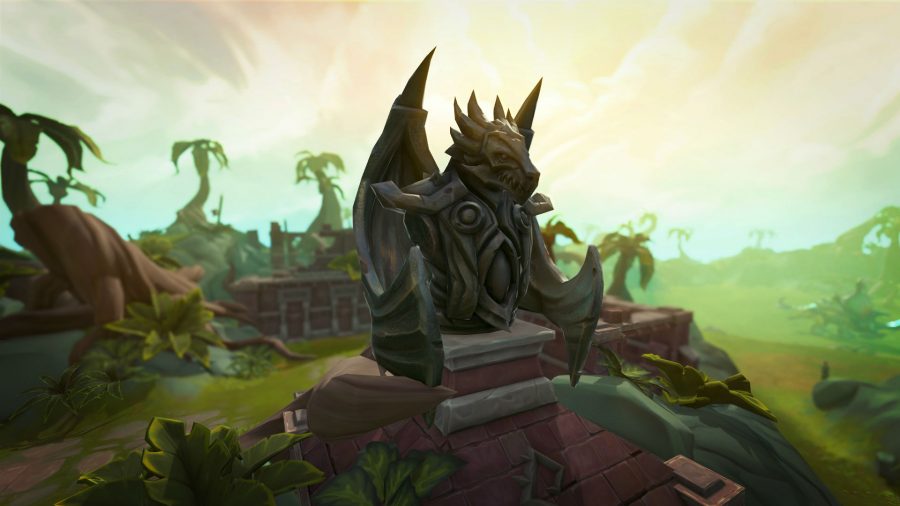 The other major skill you’ll be able to train across Anachronia is Agility. The island has one massive, intricate Agility course that serves both as a fast travel service and a customisable means of training Agility. While there is one massive loop that skirts the island, there are also innumerable small sections of course running throughout the island, allowing you to pick sections and repeat them or link different sections together for bigger hits. Learning the different routes will take a while, but it’s worth it if you want to get around Anachronia quickly.

Every venture into a lost world requires a sturdy base camp, and when you arrive in Anachronia you’ll be tasked with building one among some temple ruins. This mechanic should be somewhat familiar to players who’ve spent a lot of time with player-owned ports. Effectively, you’ll need to assign workers to gathering different resources, wait until you’ve got a stockpile of resources, and then construct a new building like a meeting hall or infirmary.

Eventually, you’ll be putting together lodges that will help you train your skills and places to sell or buy items. Any resources gathering will tick up while you’re logged out as well, so no need to invest hours upon hours into waiting for stone or logs. 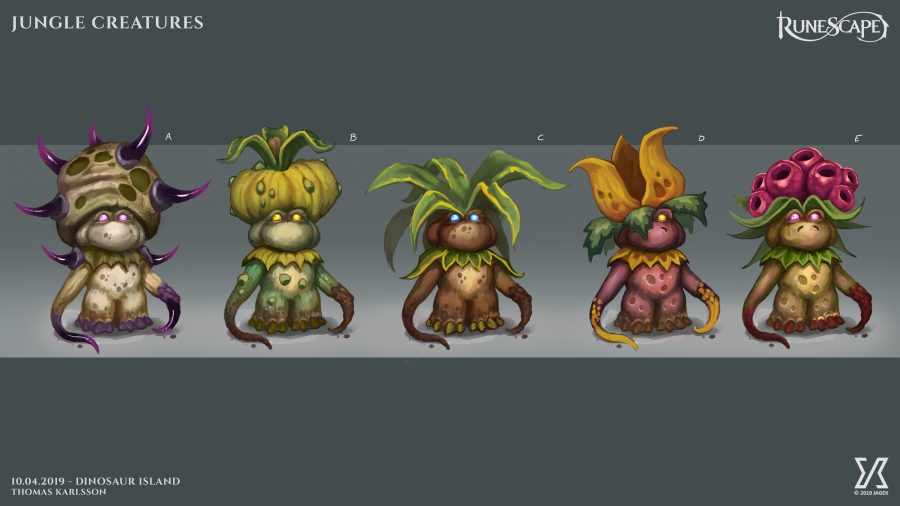 They may look like mere shrubs at first, but Anachronia is actually home to a small species of sentient creatures who look like plants, live in the ground, and worship the sun – they’re basically sentient lettuces. At some point while exploring the island you’ll happen across a cavern that houses a minigame featuring these little critters that lead designer Dave Osborne says is inspired by the Crystal Maze TV show.

The little lettuce creatures have worked themselves into a frenzy about a lack of sunlight and so are hastily running around the cavern picking shrubs and burning them in a fire, but the problem is they’re so panicked they’re burning both the poisoned plants and the healthy plants. Your job as interloper is to stop them from burning the healthy plants, and help them burn the poisonous plants. You can only get rewards from the Herby Wurby minigame once each day, but you can exchange the points you get for a variety of items, including XP Lamps.

Slayer is by far the most popular skill in Runescape, so it would be mad to make an island full of dinosaurs and not let Slayer got to town on at least some of them. Anachronia will introduce a new Slayer Master, Laniakea, who is accessible to level 90 Slayer and level 120 combat players. She is useful as she can assign cluster tasks, which give you much more freedom as to how you complete Slayer tasks. For example, instead of needing to kill 20 of a specific Slayer creature, you’ll instead be tasked with killing 20 of a certain type of Slayer creature. This will give min/max players a lot more freedom when it comes to completing their tasks.

Naturally there are also new Slayer creatures to fight, and they’re tough as nails. After you’ve defeated one or two of these you’ll see why you have to use traps to take down the big dinosaurs. 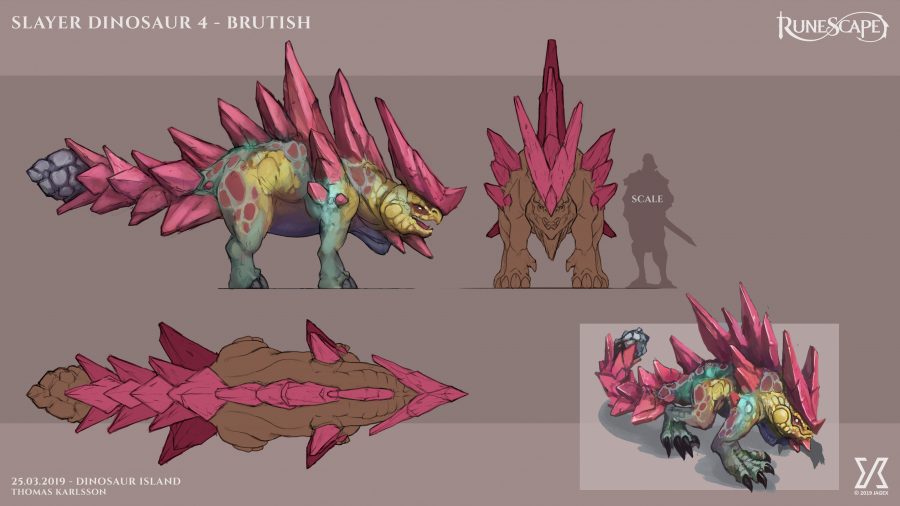 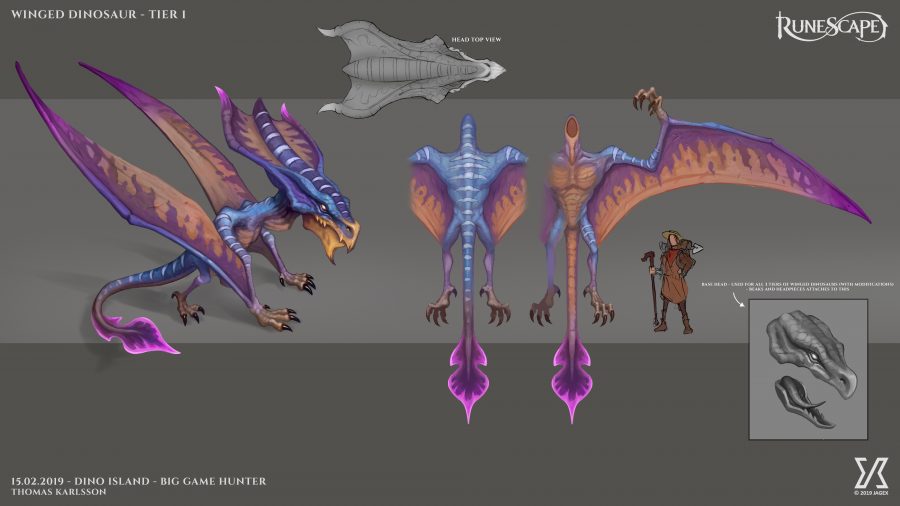 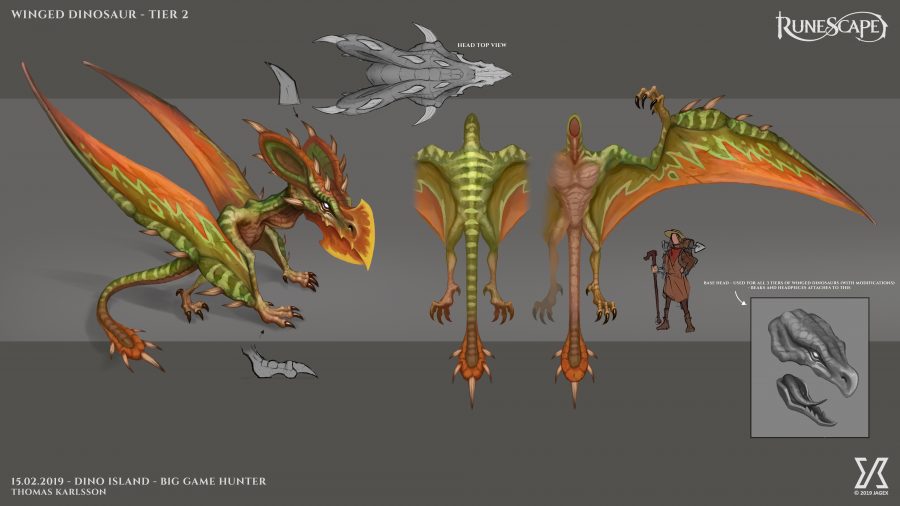 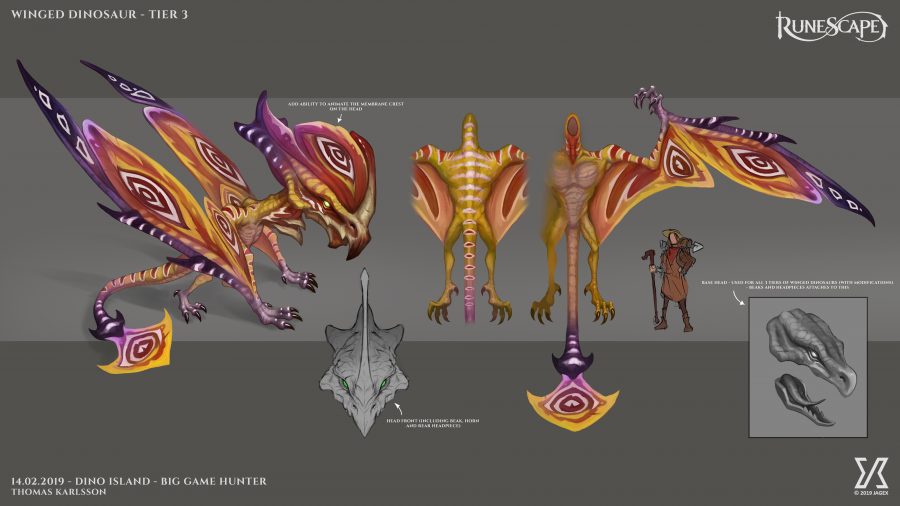 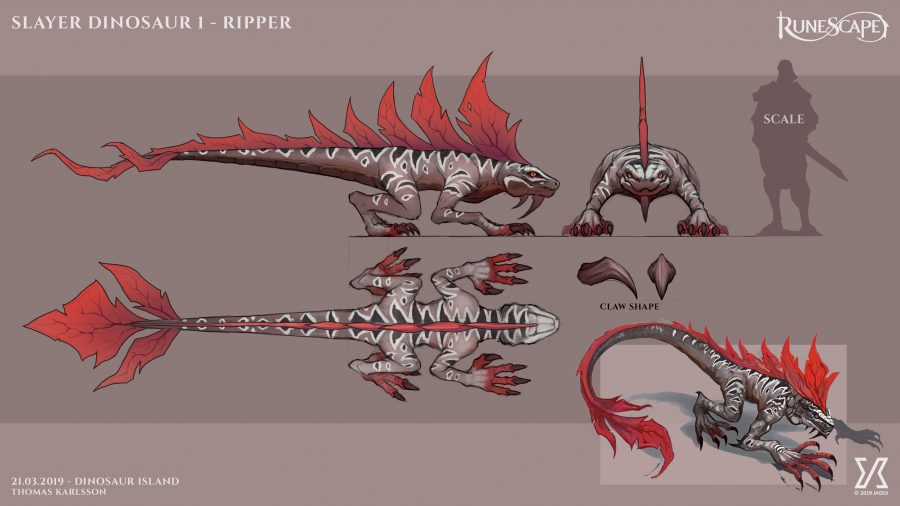 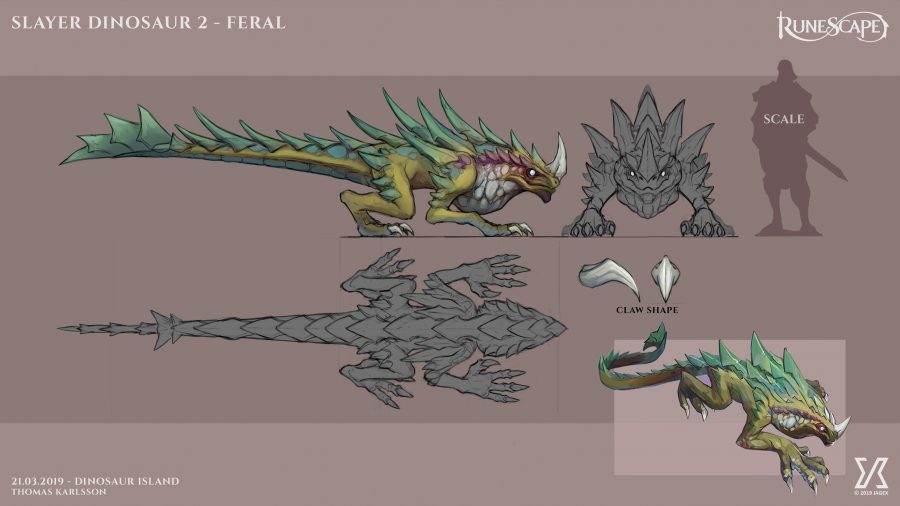 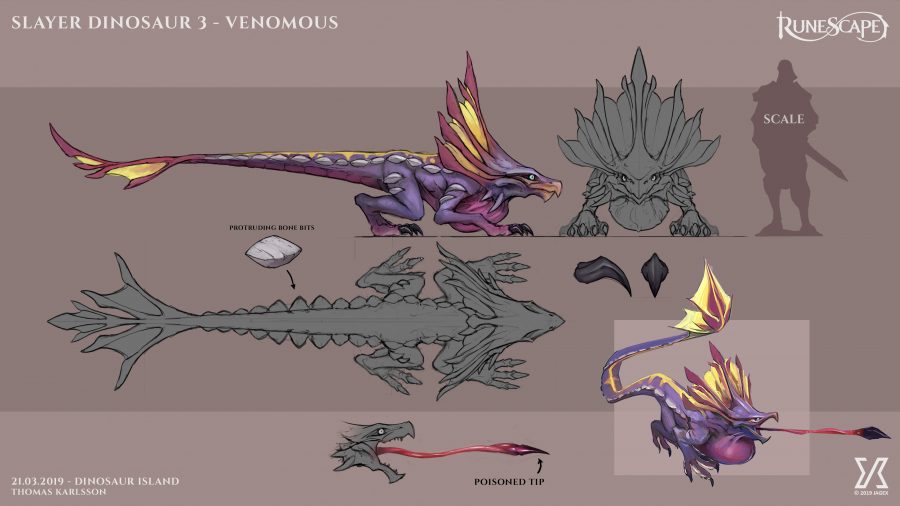 Vile Blooms are a new type of creature you can kill that are inspired by predatory plants. The cool thing about these tough mobs is that if you’re not happy with their spawn rates or locations then you can plant them yourself. We asked, but sadly you can’t plant them to mess with other players Dark Souls-style.

Totems are a new type of item you’ll find across Anachronia that will save you time across the Runescape world. These Totems are hidden around the island and offer time-saving bonuses in a variety forms. There are Totems that will make your Farming produce grow faster, ones that reduce Aura cooldowns, Totems to reduce clue scroll steps by one, and much more.

A new landmass obviously means new places to train skills, and true to form you’ll find new mining spots, fishing spots, traditional hunting spots, and an Overgrown Idol for all you Woodcutting trainers who like to take a chill approach to skilling.

MMOre like this? Here are the best MMOs on PC

Of course there’s also a grand new story beat to enjoy, but we’ll leave that for you to discover when Runescape Land Out of Time launches on July 8.