Runescape is over 13 years old, and it should be in its twilight years. At a time when even the World of Warcraft giant is losing subscribers and Blizzard has accepted that it won’t grow again, then surely Runescape should be going through something similar.

It isn’t. Somehow, it’s growing. Even a static playerbase would be impressive for a game of its age, but in July alone, Jagex saw a 20 percent increase in members. That’s a little bonkers.

So how can an MMO that’s well over a decade old keep growing – what keeps old players returning and new one’s setting foot in the world?

“We’re unique in the sense of having weekly updates,” David Osborne, Runescape’s senior narrative designer tells us. “That feeling of ‘I don’t want to [be] away from the game, because it might have adapted, changed, something might’ve been added,’ that has an effect on the community.”

Jagex gives players a look at the next month’s worth of content, so they know exactly what they’ll miss out on if they decide to leave the game for a while. And that also means there’s something new – or something old that’s returning – around the corner all the time.

For old or returning players, Runescape has been part of their gaming life for a very long time. “They’ve got loyalty to us, loyalty to the game,” says Osborne. You see players wandering around with legacy cloaks, which they’ve earned for being part of the game for a decade. It’s an astounding amount of time to play a single game for – even if they do leave it now and then. 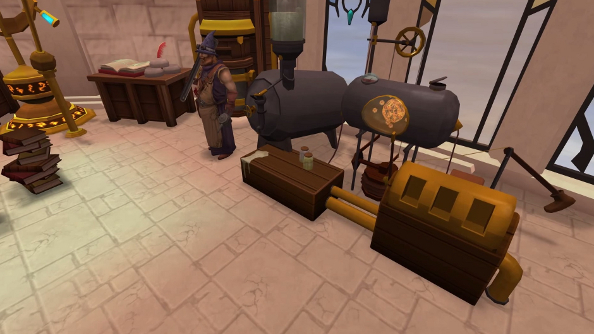 It started as, essentially, a fantasy chat room. It’s where the original players went to socialise and to spend time with their friends, and even though modern Runescape is a 3D MMO, it has retained that sense of community.

Big changes in the last couple of years have tempted lapsed players into returning, too. There are over 220 million accounts that Jagex can inspire to keep playing or start playing again. Occasionally, there’s a conflict when it comes to bringing in new players and appeasing the old ones, though.

The old combat system was putting off people dipping in for the first time, but a new, overhauled system rubbed the veterans the wrong way. Since its introduction, a compromise has been reached, and players can choose which system to play with. Both are compatible, says Osborne.

While nostalgia has currency in Runescape – two older versions of the game continue to be supported, and vice president Phil Mansell likens the game to classic sandbox CRPGs – Jagex ascribes some of its recent successes to progressive changes that have been made over the last year or so.

Players have been given more power thanks to a polling system. The most recent addition to the game, the Lost City of the Elves, which has been teased over the last decade, finally made its way into the game thanks to a community poll.

The city is exclusive to higher level players, but Mansell doesn’t believe that’s been off-putting for fresh faces. It gives them something to aim for, and there are questlines which relate to the city that can be started long before they are able to set foot inside its walls. 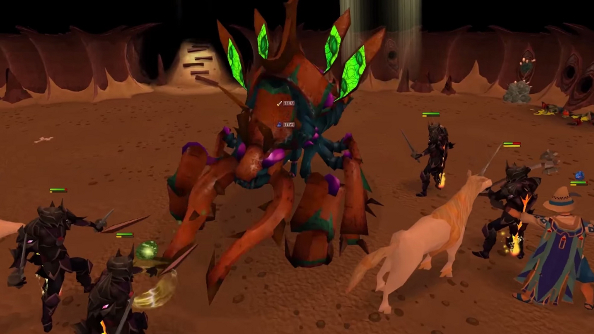 It’s got a Twitch presence now, too. Mansell reckons that it caters to a different type of Twitch viewer, who wants to have more communication with the streamer. Because Runescape isn’t as intensive a game as, say, League of Legends of Starcraft II, it’s easier to have a dialogue.

“We’ve got quite a lot of livestreamers who are essentially like DJs, broadcasters, radio station shock jocks,” he says. “They do call ins, the do crashes… by crashing I mean, they’ll find someone who is in a boss fight and they’ll bring them and their 1000 viewers all into that boss fight.”

When Jagex added Twitch support, the developer kicked things off with a big event involving giant spiders and players being turned into spiders themselves. That stream ended up being number three on Twitch at the time, with over 20,000 concurrent viewers.

The likes of Minecraft or MOBAs draw players away, but they do come back. “Runescape is the game you go back to,” says Mansell. People see it at conventions and realise how much it’s changed since they played it when they were kids, and they revisit it. And then there are the seasonal events, that draw players back into its fantasy realms. Many of its players are students, with the average age being around 19-20, and that’s when they have more time, free from classes.

It’s free-to-play, with membership options, so if you do fancy seeing what’s changed since you last visited, if you ever did, then it might be worth doing so. The last time I played, I chopped down a tree and then was promptly robbed and killed – that was about nine years ago though.