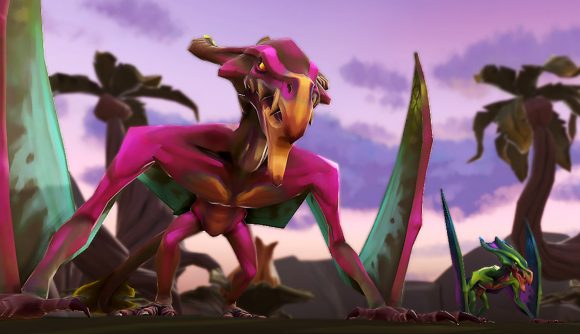 The latest update for RuneScape will let you grow your own Jurassic Park, of sorts, by raising a dinosaur farm. New Ranch Out of Time content launched today introducing dino-farming, bringing with it increases to various skills to help manage your prehistoric herds.

Having brought in dinosaurs as part of the Ranch Out of Time expansion earlier this year, Runescape developer Jagex is now letting players breed their own dinos, clearly ignoring all the pertinent lessons from Steven Spielberg’s blockbuster film franchise. Not unlike Stardew Valley’s dinosaur eggs, players can hatch, raise, and try to tame Gielinorian dinosaurs that range from “cute cuddly creatures to huge, furious prehistoric beasts”.

Five new farming paddocks for the giant lizards have been added to the standard player-owned farming features. The level caps for farming and herblore have been increased from 99 to 120, bringing new ingredients for potions like fruit trees and berry bushes, and new bombs to craft. Players can now form farming guilds, too, unlocking farming requests for rewards, and a machine that checks on all your land patches.

This new content was part of the outline given during the keynote at this year’s RuneFest. The first of Old School RuneScape’s new leagues, Twisted LEague, started on November 14, and will last until January, and Old School players are finally getting a proper clan system.

The 120th RuneScape skill, Archaeology, has since been introduced too, bringing an Archaeology guild in January 2020. Jagex is looking to increase the turn-around on quest content too, moving to what’s called a “two-month heartbeat.”

If you think you can manage dinosaurs like John Hammond couldn’t, the RuneScape dino-farming update is live now. No sign of an appearance from Jeff Goldblum yet, but we’re keeping our eyes peeled.