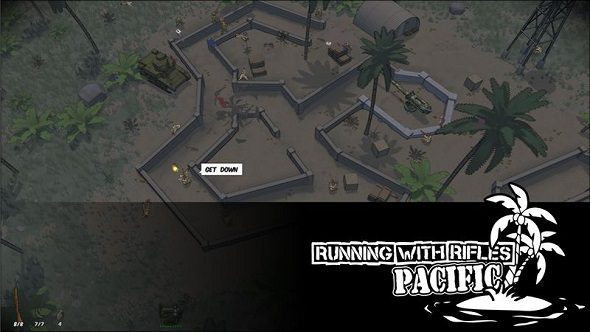 For military historians, here are some great PC games set during WWII.

This news coincides with the release of version 1.50 for Running With Rifles, which adds a brand new beach invasion map, alongside new weapons, mechanics and a whole host of balance changes. If you’re not up to speed on Running With Rifles, it’s a multiplayer top down shooter where players take the role of a single soldier in a massive company. As you complete missions, gather better weapons and occasionally teamkill your fellow squaddie, you’ll gain access to more devastating firepower and command over friendly soldiers. Your path through military life is completely up to you and with up to 40 other players doing the same on a single server, war can get a bit hectic.

As for the expansion, Running With Rifles: Pacific will offer an authentic campaign set in the Pacific Theater of WWII, where players can take control of either the Japanese Imperial Army or the US Marine Corps. Your missions will have you fighting over islands where battles actually took place during the Second World War, with each map planned to actually follow the topography and outline of these real places. Rather than the general modern warfare setting of the original, Running With Rifles: Pacific will attempt to be rooted in history, complete with accurate uniforms, weaponry and maps.

This expansion is also developed in part between the RWR development team, as well as key members of the modding community. This collaboration should hopefully result in DLC which fulfills the desires of both creator and fan. You can read the whole changelog for version 1.50 right here.

For those looking to grab a rifle and join up for some multiplayer mayhem, Running With Rifles is currently 50% off on Steam until April 4, going for $7.49/£5.49 during this sale period.