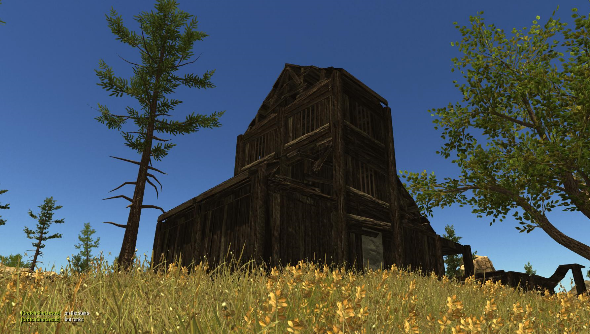 I’ve heard Rust described as an ‘Online Bastardry Simulator’. In many cases it’s perfectly apt. Rust’s wasteland is a harsh place, but it is a land where being nice to each other leads to the best achievements.

In an attempt to see how friendly Rust’s player base could be, I decided to spend some time playing as a true superfriend. No guns, no holdups. Just a smile and a warm greeting. I was surprised at how far such an approach got me.

Four hours into my experiment, I realised not once had I had to fend for myself. Almost everything in my inventory had been given to me by a stranger, and my base of operations was an open-door shelter for the homeless that someone had made. The wasteland of Rust may be inhospitable, but with a population of samaritans, I was getting on just fine. 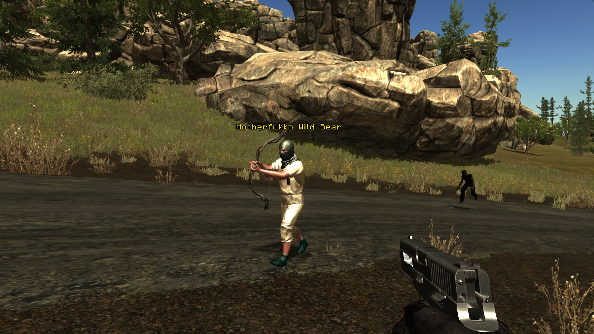 Meet Motherfukkn Wild Bear. With a name like that I was expecting to be a bloody mess on the roadside within a few seconds. Thankfully I was wrong. Whilst he did unload some of his inventory at me, it was a bag full of cooked chicken. He weighed me down with a respectable survival kit: a pickaxe, some bandages, and a loaded 9mm handgun. Wild Bear then led me to his home; an open-plan shelter with no doors that anyone could go into and find comfort beside its roaring fires. He gave me permission to use his furnace and workbench at any time. The sentiment was appreciated, but I’d never have to. I was only an hour away from getting more free stuff.

Wild Bear soon became my guide through Rust’s canyons and valleys. I explained to him that I was trying to find a friend who was also on the server, and that I only had a few landmarks to triangulate his position with. Wild Bear knew exactly where I was describing. On the way we joined up with a third traveller, who kindly sewed me together a full set of clothes. I’d progressed past the early game without even cutting down a tree, never mind working out the crafting system.

My little band of saints arrived at our destination, and true to his world Wild Bear had led me to the place where my friend had been waiting. Sat with him was Don, an IRL friend of Wild Bear, and who was soon to become chief architect on a massive joint project. It was suggested that five of us team together to build a mega fort; a sprawling complex with private rooms for everyone and a communal area where we could light campfires, sing songs, and cook chicken. How could any of us disagree? We’d be the envy of the server. 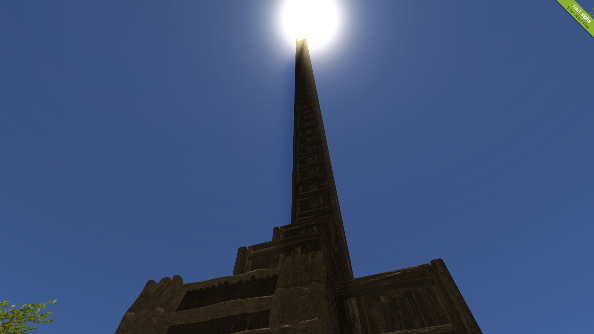 I entered into the agreement not really thinking about the end product of our labours, other than it being something mega. A good indication though would be that it took a group of five people three hours to gather the lumber it required. The building took a further two hours to construct. What was originally designed as a boxy two-storey apartment block was crowned with a tower that would loom over Barad-Dur. It took over three minutes to sprint to its highest point, which offered a vantage point looking over almost the entire landscape. Within the pillars of its cloud-piercing pinnacle, a collection of fires burnt as a beacon for lost travellers. Or so it would, if Rust’s draw distance would render the tower in at anything beyond five hundred paces.

I thought the tower would trump anything other players could create in Rust. It was something I assumed few other servers could achieve due to the simple bastardry constantly occurring.

But no. Rust continues to surprise. There are communities, out there in the wastes. Taking time out of my regular server, I headed into a new place labeled up as a friendly PvE server: no killing, no looting. Inside, I expected to see gathering and hunting going on unhindered, with little houses dotted around as individual triumphs. Instead, I got the Old West. 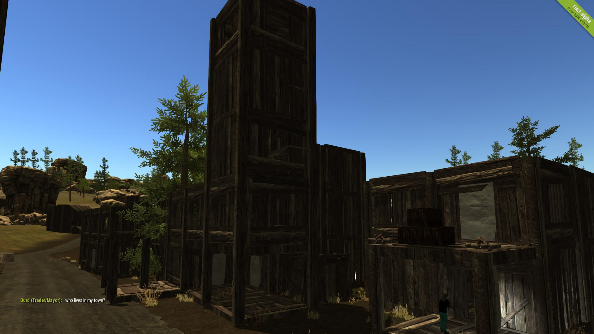 A civilisation had been born on the server. The group, which seemed around fifty strong, had built a monumental walled city upon Rust’s singular road. A housing estate lay on the furthest fringes of the town, with hovels similar to what I’d seen before but now sculpted with love and finished with more polish that I thought the game’s crafting system would ever allow.

Further into the centre, I discovered two buildings I could never have expected: shops. This town had an actual economy (although clearly devised by a group with very little understanding of how money works), with craftsmen trading metal fragments for items they had the knowledge to build. These retailers operated a fairly strict routine for purchases to ensure you didn’t rob the keepers of their wares. You were locked in during transactions, guns were banned, and some smart abuse of clipping objects through walls was used to deliver items from the secure storeroom to customers.

Pull a gun on a shopkeep and you’d end up in the prison, run by a Sheriff who marshalled the streets and who was the only player permitted to carry weaponry within the town. I never witnessed any crimes, but I imagine trying to force someone into a cell is a pretty difficult thing to do without DayZ’s handcuffs. 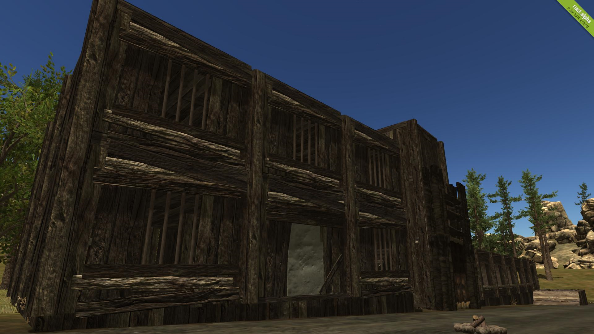 Under construction was a soup kitchen, where players were offering up free food and rations to people who were struggling to survive. And for after dinner entertainment, the Mayor of the town (the founder of the server, rather than a democratically elected leader) held pistol duels outside the tavern. A viewing gallery had been erected, and campfires placed twenty paces apart to mark starting positions. Rules were simple: combatants fought naked, armed with only a revolver. Whilst my turn with the gun ended in bleeding out and humiliation, it’s my favourite death I’ve ever died.

If you’re suffering with online bastardry in your Rust travels, don’t despair. People with etiquette are out there, and you will find them. You will be able to build a mansion without it being ransacked, defiled, and bombed by bandits. You will be able to look into the eyes of another player before seeing a game over screen. You will make it to an airdrop without being sniped.

The PCGamesN pro tips: try out servers with smaller player counts, lower your weapons, and approach with a friendly opening line.