A new dev blog on the Rust website lays out some recent changes to the game. The headline announcement is that developer Facepunch are hoping to have finally cracked progression in the game with a new component-based system, but there are lots of smaller tweaks and additions to talk about, too.

For more scavenging, emergent gameplay, try one of the best sandbox games on PC.

“The component system is now live. This represents a fundamental shift into how Rust will be played,” says lead developer Maurino Berry, who is now the boss as studio founder Garry Newman isn’t currently working on the game.

Discussing the decision to scrap Rust’s much-maligned XP system, Berry says: “The XP system mainly sucked because it completely changed the feel of Rust as a sandbox. It was no longer about new encounters and enjoying your time in the game world, but instead about how to level up as quickly as you can. And when that finally happened, the game immediately became boring.”

The XP system itself replaced blueprints, which were dropped items that taught players how to craft better items, and formerly governed progression. Berry dismissed them as “too random.”

“So I’ve done my best to combine the best of both worlds with the component system”, he says. Here’s what you need to know:

Progression will again be governed by item crafting. “When you’re ready to move on to bigger and better things, you’re going to have to search for components for more complicated items. This means going to Radtowns, barrels on the roadside, or, if you’re lucky, encountering the newly added junkpiles while harvesting resources.” Almost all components will be useful in several recipes, so you’ll have to choose which of several items to craft.

Berry warns you that this system is still a work-in-progress, and much balancing work still lies ahead. “I sincerely hope this is the last time we have to revisit item distribution so we can move on to adding more fun or desperately needed things to the game, like rideable horses, or pooping,” he concludes.

Berry notes that Recyclers have pretty important interplay with the new component system, so gives a refresher. You can find Recyclers at most Radtowns. They will refund about 50% of the constituent components/resources of any item you throw inside – cloth from armour, metal fragments from sheet metal or a propane tank.

Radiation has been added back into the game, but now works entirely differently than it used to. Berry explains: “Each radiation zone specifies a radiation level from Minor, Low, Medium, High. These correspond to a RadPerSec value (2, 10, 25, 45). The Radiation value from your clothing indicates the RadPerSec subtracted from your exposure. So, if you are in a Low radiation zone (10 rads per sec) and you have radiation protection of 8, you’ll receive 2 rads per second.” 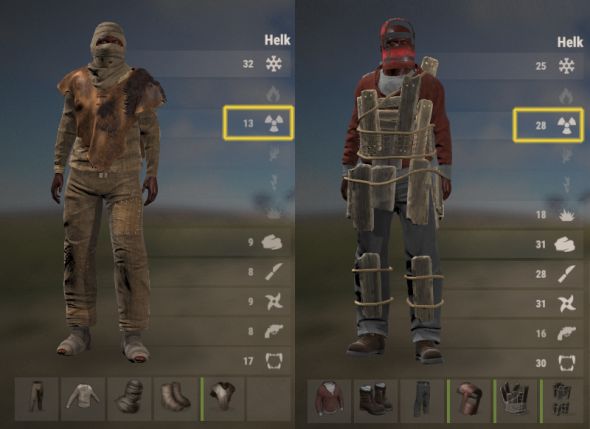 Junk Piles are a new feature designed to work with the component system. You’ll encounter them in “fields, forests, under powerlines” as you explore, and they will contain a procedurally generated cache of components for you to harvest.

The rest of the update is a brisk rundown of lesser stuff with not much detail, most of which will be expanded on in the future. Melee weapon damage is getting buffed by 30-40%; salvaged tools will now require components but gather 30% more than they used to; and maps no longer have fog of war.

More excitingly, a high-capacity Beretta pistol is being added to the game, there’s an update on implementing harbours, and some regions, especially around Hapis Island, are being altered or fleshed out. There are some changes to how skins work, an update on the hazmat suit, and technical tweaks to graphics performance and networking.

That’s the big game-changing stuff, and some of the small stuff too. Head on over to the Rust website if you’d like to read the update in full. You can learn more about Rust on Steam, where you can get into the alpha for £14.99, or $19.99 USD.