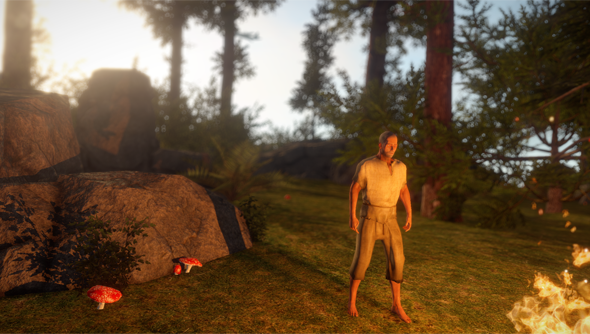 On Friday, Facepunch Studios made the mistake of talking publicly about one of the prototypes they’ve been working on. No sooner had programmer Adam Woolridge introduced arcade shooter Rift-Light, than commenters concluded that Early Access funds were being used to divert manpower away from Rust. In a spurt of crowdsourced fiction, others decided that the Steam-swallowing survival game had been cancelled outright.

“They are probably going to be even angrier to find out that we have three other prototypes being worked on by Facepunch staff,” wrote Facepunch’s Garry Newman today. “Should HBO make one TV show at a time? Should Warner Brothers make one movie at a time?”

“Are we crazy?,” Garry asked. “Are we doing it wrong? Should every person in the company be working on the same thing?”

Not only have Facepunch got lots of work left to do on Rust, said Garry, but they haven’t finished work on Rift-Light either, nor the three other prototypes they have in development. And before tying up any of those projects, Garry wants to hire more programmers to begin yet more prototypes.

“Our strategy at the moment is to hire talented people to make the games they want to play,” he explained. “We’re not asking you to fund this. We’re not starting a kickstarter and begging you for money – we’re funding it.”

Facepunch have bankrolled new projects using money from their two wildly successful ventures: Rust and Garry’s Mod. And that, Garry suggests, is not something they should have to justify.

“Arguing that we should be re-investing that money back into only those games is like telling Apple they can’t spend the money they made from iPhone and Macs to fund the development of the iPad,” he wrote.

“We funded Rust for 1-2 years before it eventually became what it is. You bought early access to it. When you buy a pizza you aren’t funding Dominos, you’re just buying a pizza.”

Rust has not be abandoned. Far from it: development has stepped up since early Steam sales proved “insane”. The game’s being updated “very regularly”, and the suggestion it isn’t “hurts” when Facepunch are “working all week on it”.

Okay. Is that all cleared up, then?