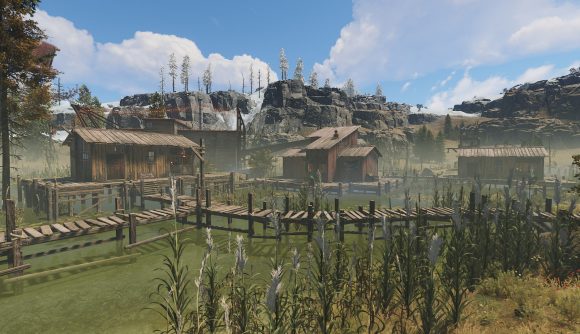 A new month is bringing us a new Rust update, and this one looks to be especially pretty. The Rust May update features the game’s biggest graphical upgrade ever, and a few other notable changes, including a big Junkyard overhaul, more convenient landscaping, and – as ever – a swath of bug fixes.

Rust’s visual update is its “biggest to date,” developer Facepunch says in a press release. “This is the culmination of work by the team over the last couple of years. It greatly improves how the game feels and we think gives it a fresh look.” This update also revamps how monuments generate inside the procedural world for more seamless transitions between areas. Further details will be available on the official blog on May 6.

In addition to the broader reworks for monuments, the Junkyard has gotten a complete overhaul. Among other things, it’s gotten a drivable crane, which you can use to drop vehicles in a shredder for scrap. (And, presumably, there will be more violent purposes for it, too.)

This update will also make bushes disappear when you’re building on top of them, to keep the foliage from getting in the way – they’ll just respawn elsewhere now. “Further improvements and fixes made this month include Mounted gestures, fixing player hitbox bugs, and News menu updates amongst others,” though details on those will be reserved for the aforementioned blog post.