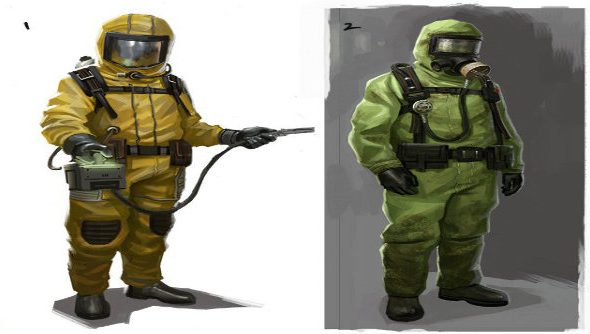 Over on Rust devblog, interesting changes are afoot. There are pictures of fluffy, pink clouds, tunnel-like facilities, hazmat-wearing scientists and naked men with tiny wangs.

Read about how ex PCGamesN-er Steve Hogary came to terms with his Rust character’s small penis.

The Rust team are working hard to make the island a more interesting place to be. Skyboxes are being updated with more appealing clouds, human skin is getting a specular shine, players are getting better animations for being wounded in the back, and underwater facilities are beginning to snake their way beneath the map.

One of the more interesting additions is the possible addition of a new type of NPC: a creepy scientist in a hazmat suit who will go about their business and ignore players unless approached.

Here’s the thinking behind their design:

“This week I managed to work up some scientist NPC ideas, exploring the basic look of their hazmat suits. I want these guys to have a weird, unsettling feeling. I felt like you could capture this by hiding their faces completely behind dirty face masks.

“I also think it would be cool if they somewhat ignored the player as they went about the island conducting their research, only really acknowledging you if you got too close and threatened them. It would be cool if you could hear them communicating to each other with muffled, distorted voices so you can’t really understand what they’re saying. Just to add to the creepy factor.”

Sounds like they could add an interesting dynamic to the online game, though players will likely hurl rocks at them whether they’re a threat or not.

The team is also looking at ways of improving the experience on the official servers and loads more. Read the devblog here, but be warned: it contains at least two flaccid dicks.