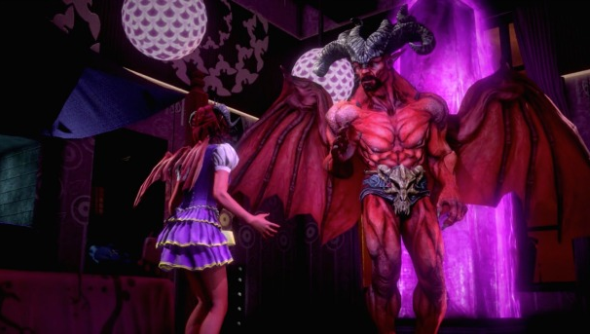 Stop! If you’ve heard about a too-good-to-be-true deal involving the upcoming Saints Row IV: Gat out of Hell, then I’ve got some bad news. Gamestop have had the PC version of the game up on their US store page for over a day now, and at a very alarming $4.99 price point, down from the RRP of $19.99.

Naturally, a lot of folk have gone and purchased the incredible deal. But a tweet from Deep Silver PR & Marketing man Will Powers, has put a halt to it all.

“This is not real.” said Powers. “Orders won’t be honored, sorry.”

Update:Buyers of the pre-order have confirmed that Gamestop did indeed honour the $4.99 pricepoint the game was mistakenly set as. Congratulations for all those who got it cheap!

The situation appeared when Gamestop put up pre-orders for Volition’s upcoming standalone: Saints Row IV: Gat out of Hell. While many other major retailers had priced the game at a respectable $19.99, Gamestop were offering the same game at a quarter of the price: $4.99.

The news of the offer spread like demonic wild-fire over the internet, and before long a lot of very happy customers were relishing their good fortune. Even after a full day, and still as of writing, the Gamestop store page still has the same low, low price.

However when publisher Deep Silver heard about the news, they were quick to dismiss it as fantasy.

So, if you’re thinking of taking advantage of the deal, just be aware that you’ll most likely be asked to cough up another $15 before the game is out next week.

Thanks for the tip Alyx Zark!