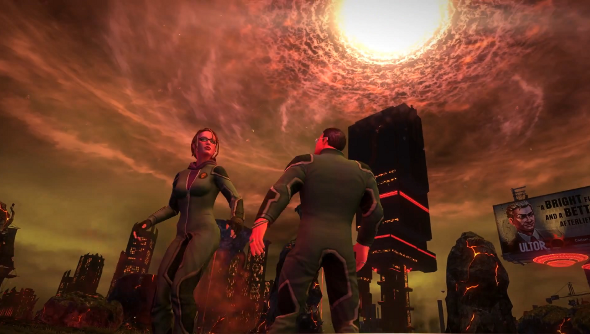 We were betting on Saints Row V, but Volition’s new project – just announced today at PAX – will not be the fifth entry in the open world criminal-turned-superhero caper. Instead, it’s more DLC for Saints Row IV.

The good news is Saints Row: Gat Out of Hell it puts lovable psychopath Johnny Gat in the driver’s seat, and sees him take a trick down to Hell with ex-FBI hacker Kinzie in an effort to save the President and leader of the Saints from the clutches of Satan. Big Red wants the Prez to marry his daughter, and this is just how courtship works in Hell.

With Hell comes a new city: New Hades – an open world with five different islands with with missions, diversions and stuff to blow up.

Superpowers return, too, but in an appropriately supernatural flavour, with Gat and Kinzie able to summon demons and fly like an angel. Both Saints are playable, as well, both in single-player and co-op.

It’s a proper expansion rather than your run of the mill DLC, and you won’t need Saints Row IV to play it, as it’s a standalone.