There’s a hard speed limit imposed upon the hoary ol’ SATA connection… 600MB/s and no further. That’s as fast as the latest iteration of the storage interface can go; if you want faster then you’ve got to switch to PCIe-connected NVMe drives. For Samsung’s new 860 series SSDs, then, storage is not about the sprint, for SATA drives it’s now all about marathon endurance.

This is the difficult messaging manufacturers of SATA SSDs are having to cope with right now. Because of the generally high cost of memory the capacity, and price per GB, of SATA drives hasn’t really changed over the last few years. The speed isn’t going to break free from the shackles of the SATA 6Gbps interface, so everyone is having to start trading on something other than pace and capaciousness.

The 860 EVO SSD is the distillation of all the solid state learnings Samsung has achieved over the last few generations of both SATA and NVMe-based drive. And that means it’s chasing down drive endurance figures as the go-to stat for comparing SATA-based SSDs, now that speed is being more capably dealt with by superfast NVMe drives.

It’s using the same vertically stacked NAND flash memory as the lightning-quick Samsung 960 EVO: its own in-house designed and manufactured 256Gb 3-bit MLC V-NAND. At least it is for the 250GB and 500GB versions of the drive. From what I can make out the higher capacity variants – the 1TB, 2TB, and 4TB drives – are all using larger 512Gb memory modules. 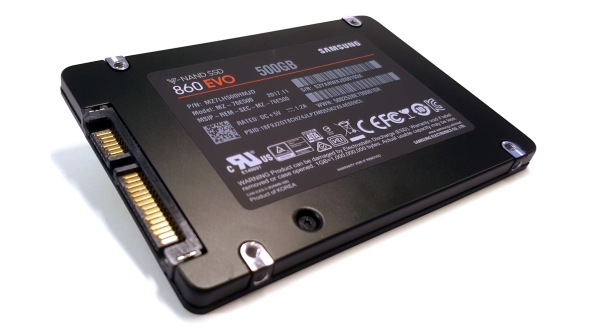 Having the smaller 256Gb (32GB) modules in the 250GB and 500GB SSDs means greater parallelism when working with the Samsung MJX memory controller. If they were using the 512Gb (64GB) modules at that capacity you’d have fewer dies feeding into the multiple memory channels of the controller, and therefore lower performance.

The 3-bit multi-layer cell (MLC) V-NAND – also known by the catch-all term, triple-level cell (TLC) – is one of the most cost-effective of the different SSD memories being used right now though the new QLC-based Samsung 860 QVO will have something to say about that. Both technologies have a lower endurance rating than standard 2-bit MLC, a little lower overall performance, and also a slightly higher power draw. That’s why you’ll find the TLC V-NAND being used in Samsung’s EVO drives while it sticks with traditional MLC for the PRO SSDs.

We’re expecting to see quad-level cell (QLC) NAND really taking an aggressive stance on price, but with the drop in NAND prices recently some of the shine has been taken off the newer, supposedly cheaper technology. There are still some tasty TLC drives out there at the same capacity, a similar price, and with better performance.

Despite the lower level of endurance from the 860 EVO’s TLC memory Samsung is still offering a decent five year warranty on their lower-spec drives. The big news, however, is they’ve massively upped the game when it comes to the total bytes written (TBW) figures for the EVO range. With the last-gen Samsung 850 EVO the 500GB drive has a guaranteed rated endurance of 150TB to be written over its lifetime. Samsung has doubled that with the 860 EVO, pushing up to 300TB.

That equates to a pretty darned hefty 164GB being written to it each and every day for five years. And with the 1TB drives that gets doubled.

Samsung is claiming there’s no secret sauce being baked into their new drives, that there’s nothing other than their confidence and expertise in the manufacturing of all the different parts of their SSDs going into doubling the expected endurance of their 860 range. That alone is rather impressive. 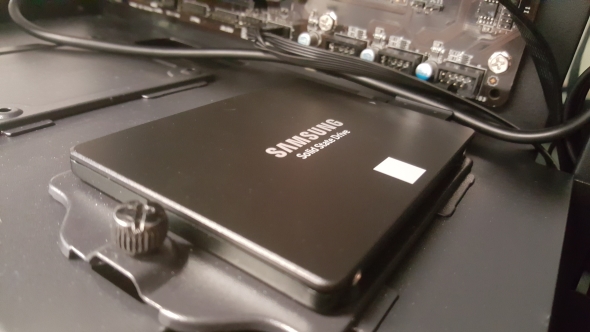 Being able to cut down the amount of power the 860 EVO draws in comparison with the previous generations of Samsung SATA drive is going to have something to do with that increased longevity. The 860 EVO 500GB draws an average of 2.5W when hitting its read/write peaks, while the 850 and 840 EVO SSDs of the same capacity draw around 4W. That’s nearly double the efficiency.

As well as using the same memory as their 960 EVO drives the 860 EVO is implementing the same Intelligent TurboWrite algorithms that gave the PCIe-based 960 EVO the ability to keep pace with its Samsung 960 PRO variant. TurboWrite allows the drive to apportion some of its storage as single-level cell (SLC) memory – essentially letting it act as a speedy write buffer. This has been around since the 840 EVO era, but with the 960 EVO Samsung gave the feature the ability to add to its default TurboWrite capacity if the write operation was going to exceed the standard amount of cache available to it, thus slowing down the process.

The Intelligent TurboWrite feature gives the 500GB 860 EVO a 4GB default buffer, but lets it take an additional 18GB from the spare capacity of the drive. Obviously the SSD needs to have at least this amount of free space available to be able to take advantage of the dynamic caching system. 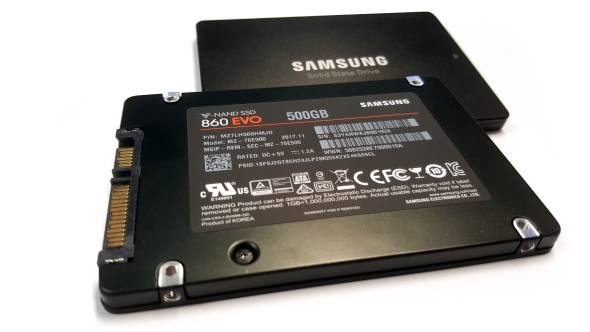 The 860 EVO performs exactly how you’d expect a modern SATA-based SSD would. Which is to say that it’s knocking around the 500MB/s level in terms of its sequential read-write performance. Given the hard 600MB/s limitations of the SATA interface that’s the same sort of performance we’ve been seeing from these little SSDs for at least the last four years.

That’s not to say the 860 EVO isn’t one of the fastest SATA SSDs you can buy right now, it absolutely is. Even compared with the PRO version, the 860 EVO is up around the top with both the ATTO peak read/write and AS SSD tests. That said, while the drive is a capable performer, it’s not exactly massively faster than the last generation of SATA SSDs or, crucially, the Crucial competition.

But, as I said at the beginning, SATA SSDs are no longer about performance. If you want speed you pay the big NVMe bucks, but if you want longevity from your SSD data storage then this is where it’s at for solid state drives.

This 500GB 860 EVO has an endurance rating that’s 100TB more than the pricier 500GB 960 EVO, though it has an extra two years compared with the 960’s warranty. That translates over to the PRO comparisons as well, where the 860 PRO has another 200TB over the 960 PRO’s total bytes written rating, despite both having the same five year warranty. 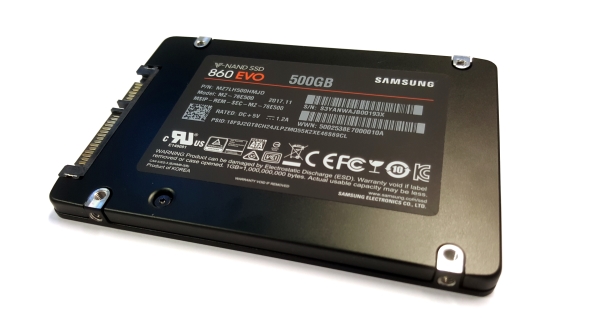 It’s tough to argue against the Samsung 860 EVO now being the go-to SATA SSD on the market. The price tag of this 500GB drive means it isn’t the best-value SSD you’ll pick up today, but given it’s sporting an unprecedented level of endurance the 860 EVO would make either a decently speedy, relatively affordable boot drive, or an impressively quick, capacious, long-lasting data/scratch drive.

Where you can argue against it, however, is when you look at the level of performance you can get out of the Crucial MX500. The Crucial drives have often been the only cloud on Samsung’s SSD horizon, thanks to the fact parent company Micron can make both the 3D NAND and the DRAM cache for Crucial’s SSDs, but they’ve latterly dropped off the pace in favour of purely being the value proposition.

The MX500 might not have the guaranteed endurance of the 860 EVO, but it’s got pretty much the same level of performance, and you’d really have to go some to get through the 99GB written per day level the 180TB TBW figures suggest from within its five year warranty. And Crucial are still able to undercut Samsung despite having to go outside the company for its Silicon Motion memory controller.

But that is where Samsung’s strength in this market really lies, it can create SSDs purely from its own hardware, whether that’s NAND, DRAM, or memory controller. That allows it to be aggressive on price, but also gives it the confidence to guarantee this level of endurance.

What doesn’t quite make sense, however, is why it’s still persisting with the PRO and EVO class drives for SATA. Because it’s using the faster, more reliable MLC V-NAND the PRO can offer higher performance and a higher TBW rating, but you would really have to go some to top the 300TB TBW level needed to justify the 860 Pro’s 600TB rating. If it retained the ten year warranty then maybe the pro-user would be better off with the eponymous 860 PRO, but as Samsung has halved the serious drive’s warranty it makes less and less sense.

While SATA SSDs are now mostly all about space, not speed, Samsung is obviously hoping that banging the endurance drum (very tiring, that) will have people queuing up for the 860 EVO. And they probably should, it’s an excellent drive.