The new Samsung Portable SSD X5 is the storage experts’ latest lightning speed drive, aiming to deliver professional-level solid state performance into the hands of people on the move. Or to give you the option to have your entire Steam library on an external disk that can outperform most internal SSDs on the market.

But there is a catch, and it’s a pretty big one. You need to have a Thunderbolt 3 compatible PC to be able to get the most out of the drive, and not only that, but that PC’s existing storage has to at least be the equal of the new Samsung X5, in performance terms, for you to get there.

That is, however, realistically the only way Samsung is going to be able to harness the power of its NVMe SSDs on the go, such as the excellent Samsung 970 EVO. The Thunderbolt 3 interface is a necessity as it’s the fastest around, offering 40Gbps of bandwidth. That’s four times the top speed of USB-C which only has a comparatively slow 10Gbps of available bandwidth to offer. Loser.

Inside the new Samsung Portable SSD X5 is essentially one of its latest NVMe drives. It’s an SSD sporting the most recent iteration of Sammy’s 3-bit MLC V-NAND (that’s the same as TLC memory, but Samsung likes to be different) which is built in three dimensions, like all good modern memory should be. That V… that stands for vertical.

It’s also using the same TurboWrite tech that Samsung has fixed up its internal EVO drives with in the past. TurboWrite works by apportioning some of the SSD’s memory as single-level cell (SLC) NAND, rather than the slower multi-level cell (MLC) memory that it uses as standard. This essentially operates as a speedy bit of cache to help speed up transfers and load times. The 970 EVO, in similar 1TB trim, is able to utilise a total 42GB of its capacity as SLC, so any transfers below that size can be given a healthy speed bump over the standard 3-bit MLC pace. 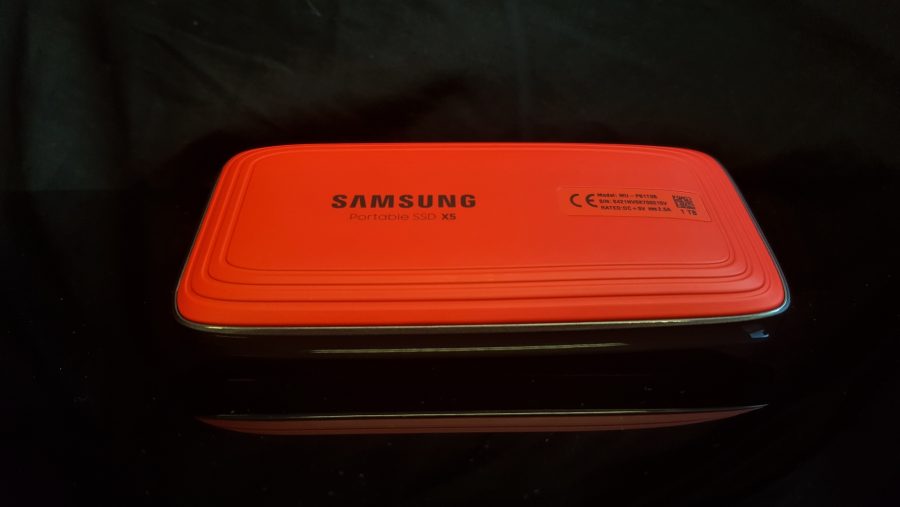 By mixing the advanced SSD memory with the TurboWrite caching technology the new Samsung X5 is capable of hitting peak read and write speeds of up to 2,800MB/s and 2,300MB/s respectively. Considering the previous fastest portable SSD Samsung created, the Samsung T5 topped out at around 550MB/s, that’s quite a difference in performance.

Unfortunately our testing has been hobbled by the limitations of the Thunderbolt interface – not necessarily the performance, but where it appears.

As we said, to get the most out of the Samsung X5 you need a speedy drive installed in your machine, and to help us out Samsung also sent us a 2TB 970 EVO SSD for the test rig to make sure we had one. Unfortunately, because Thunderbolt needs a relatively sizable royalty to install on today’s hardware, there are practically no gaming motherboards which ship with Thunderbolt 3 connections. It’s USB-C all the way…

And, double unfortunately, Thunderbolt 3 devices aren’t backwards compatible with USB-C despite seemingly using the same connection. It uses specific Thunderbolt silicon to function, so just having a socket it will plug into doesn’t mean you’ll get any joy out of the Samsung X5.

But it is a relatively common interface for modern laptops, especially professional slabs such as Dell or Apple notebooks. Because I refuse to sink to testing on a Mac we used a Dell XPS 2-in-1 to test our X5 sample. The Toshiba NVMe SSD inside, however, meant that we couldn’t hit the performance heights as advertised, but did still mean we were getting transfer speeds well over three times that of the T5. And that drive’s no slouch in its own right.

To get to the rated 2,800MB/s and 2,300MB/s read/write speeds you’re going to need to have a seriously high-end NVMe drive already installed inside your laptop.

The struggle is, somewhat inevitably, you’re looking at almost paying three times the price of the previous generation of portable Samsung SSD. Right now you can pick up a 1TB version of the Samsung T5 for just $280 (£235) while the same capacity X5 is retailing for $700 (£630). That’s a huge premium, especially when you consider that the 1TB version of the M.2 Samsung 970 EVO is $340 (£314), or half the price of the X5.

That means the Thunderbolt 3 NVMe caddy alone costs about the same as the actual M.2 SSD Samsung has dropped into it. 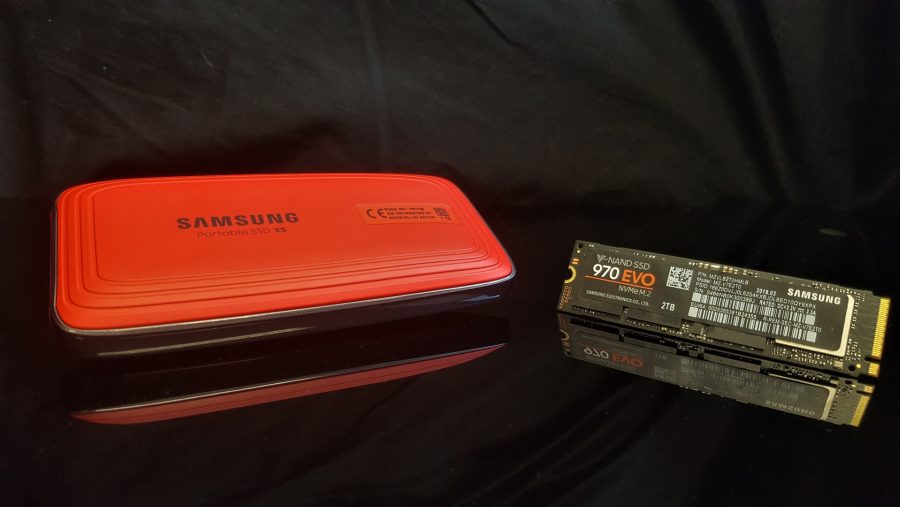 It is undoubtedly super quick – the fastest portable drive we’ve ever tested – even just plugged into a little Dell XPS laptop. But its utility is what I’m questioning. For us gamers the likelihood of having a Thunderbolt 3 compatible motherboard in our desktop PCs is pretty low, though is admittedly higher if you’re rocking a gaming laptop.

With a Razer Blade or a Gigabyte Aero 15 – or even one of them fruity laptops – which all have Thunderbolt 3 ports, the Samsung X5 will be an almost seamless way to expand your storage. And when the lovely Aero 15W only comes with a 512GB SSD, it’s clear every little extra helps.

If you’re a professional – say a photographer or videographer – then arguably the cost becomes worth it. With a high-end laptop, and capacious, super-fast storage, the price is probably not as much of an issue when you can start throwing around 4K footage or RAW images four or five times faster than with any other external storage device currently on the market.

But for gamers there’s no real way to justify that price. The excellent Samsung T5 is as fast as an internal SATA SSD, which is still speedy enough for most of us. And it’s also backwards compatible with all forms of USB, which makes it of far broader use. Taking the new X5 to a recent Nvidia RTX capture event, where no machine was Thunderbolt-compatible, drove home how useful that backwards compatibility can be…

So, it’s far more of a professional drive than anything else. Which does also make the incredibly un-Samsung, supercar-styling very strange. I get that the girth is necessary to house the hefty heatsink necessary to keep speedy NVMe SSDs cool, but the grey and red magnesium full metal housing? With that strange bullhorn logo on top? I can’t see a lot of Mac people wanting to have that next to their grey laptop with hipster-ironic stickers on, no matter how blisteringly fast it can be.

The Samsung X5 is definitely the fastest portable storage drive we’ve ever tested, and is so even without our test machine being able to reach the limits of its performance. But with zero non-Thunderbolt compatibility it’s an incredibly niche product, made more so by its huge price tag. It’s fast, but it’s not for us.