It's difficult to tick all the right boxes when hunting for the best gaming monitor, as a high refresh rate usually forces you into a lower resolution, smaller screen, or a cheaper TN panel. Samsung sidesteps all these compromises with the Odyssey G7 by pushing a whopping 240Hz on a 32-inch curved 1440p VA panel – and if you think that's a mouthful, that's just the tip of the iceberg.

Samsung goes big on pretty much every aspect of the G7, including a chonky V-shaped stand. There's a bit of wobble, which isn't surprising given the size of the monitor, but the screen sits sturdy and can swivel and tilt without a problem. You can even twist it 90-degrees into portrait mode, but you probably won't want to with the aggressive 1000R curve that's designed to be the centrepiece.

Unfortunately, it's so bulky that it's only suited to the biggest and best gaming desks. The stand itself takes up over a third of my 60cm long desk, narrowing the viewing distance to a potentially uncomfortable degree for such a large screen. The right leg also overlaps my extra large mouse pad just enough to accidentally thwack it with my mouse.

If you have room for the stand, it’s a robust bit of kit, but it’s a shame Samsung isn’t hopping on the trend of selling the display separately for those of us that prefer the freedom of a desk clamp or wall mount. It provides a VESA attachment to make the process as painless as possible, but you’re still left with a hunk of plastic you then have no use for. 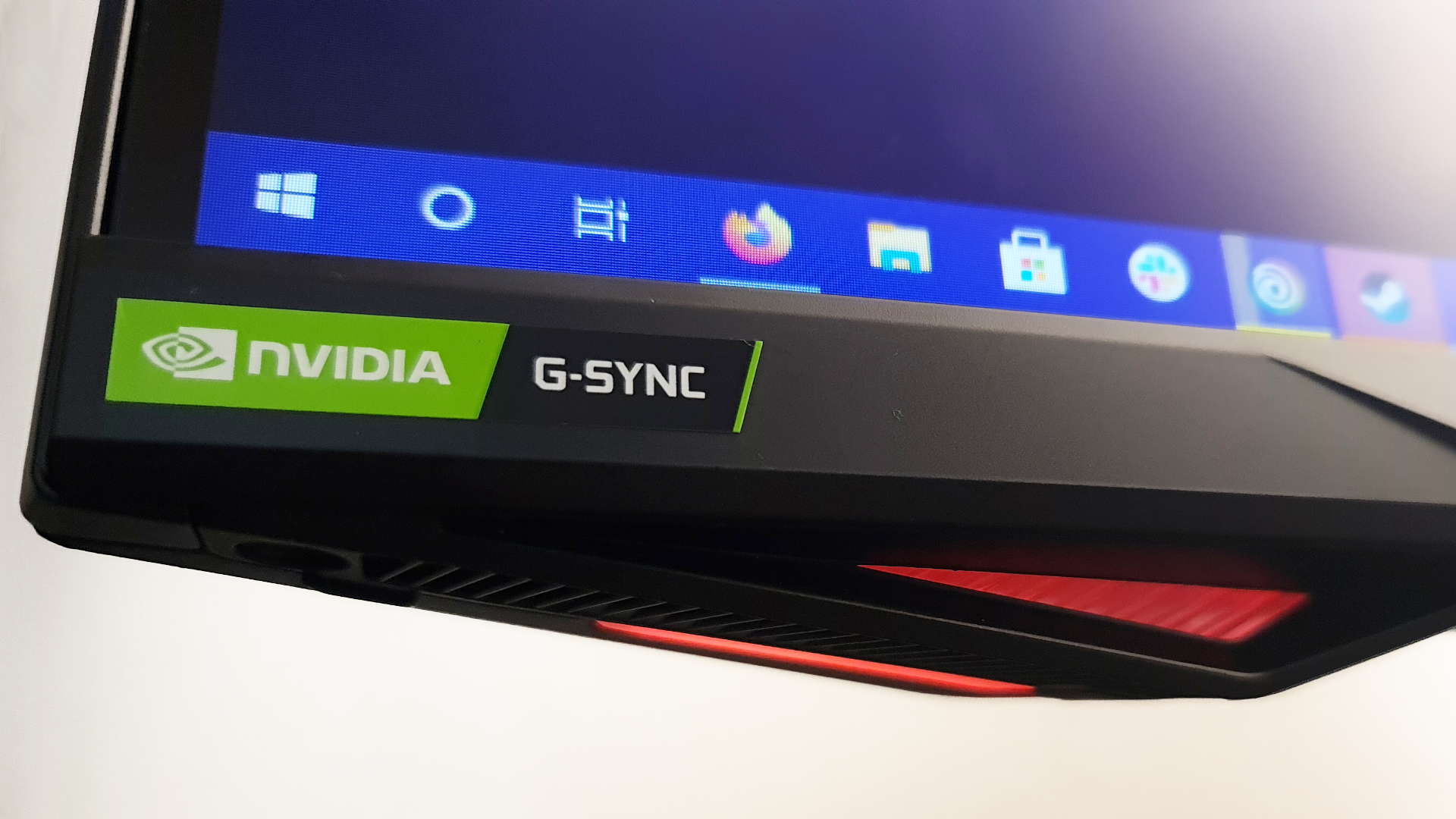 The monitor itself is about as modern as it gets with thin bezels, a gorgeous textured backplate, and USB passthroughs for the best gaming keyboard and mouse. Samsung even throws lighting into the mix, but it’s little more than a gimmick. The two front-facing LEDs are angled downwards to avoid any distracting glare, but these aren’t bright enough to make much of a difference. Even the bigger, brighter LED on the rear struggles since it sits so far away from the wall. It pales in comparison to the Razer Raptor 27, which features full, synchronisable RGB on its stand rather than 52 underwhelmingly dim colours.

It’s not what’s on the outside of the Odyssey G7, however, but what’s under the hood. It has low input lag and adaptive sync technology from both families, with G-Sync preventing screen tearing on Nvidia GPUs and FreeSync doing the same for AMD Radeon graphics cards. The display has it turned on by default, but it’s worth double checking and making sure you enable it in Windows 10. 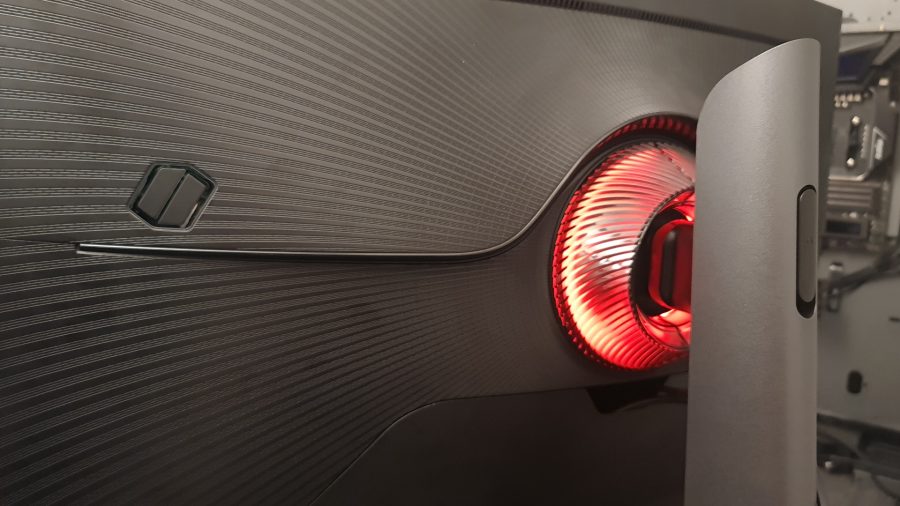 You’ll want to use one of the two DisplayPorts to get the full 240Hz, as the single HDMI 2.0 is limited to just 144Hz at 1440p resolution. It’s all relative whether you’ll notice the difference between the two, but these blazing fast speeds translate particularly well to FPS games with Nvidia Reflex. I hit my shots in Rainbow Six Siege much more frequently with the smoother refresh rate, as it makes the 120Hz Acer Z35P feel sluggish by comparison.

One thing you definitely will notice about the Odyssey G7 is its behemoth curve. Up until now, 1500R was the most aggressive curve on the market and I’m used to 1800R, making Samsung’s 1000R a bit of an adjustment. I can’t say it helps in any competitive sense, but being enveloped by the screen easily draws you into the best story games and atmospheric titles like The Outer Wilds. It’s also pretty good to work on, too, with plenty of real estate at 32-inches.

Even its VA panel exceeds expectations. It still has poor viewing angles unless you’re directly facing the monitor, which is standard for vertical alignment and a little more pronounced here with the curve, but there’s no motion blur or ghosting in sight. The default colour calibration could also fool you into thinking this is actually an IPS panel, with very few tweaks needed. 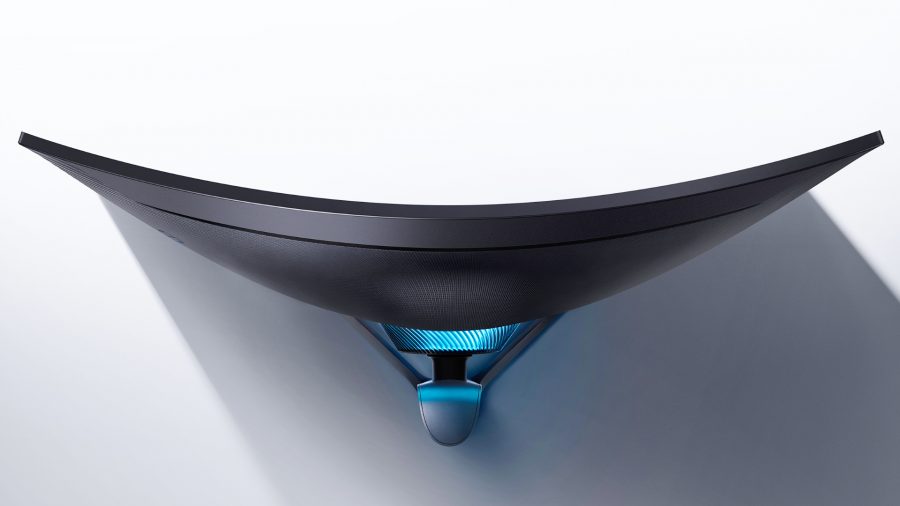 You’re better off lowering the sharpness to around 50 to avoid pixelated fonts, and placing the black equaliser at 15 to remedy scan line issues that are all too common with the Odyssey G7. I also reduced the contrast by a quarter, but there seems to be a notable variance in the contrast between different units.

Samsung uses DisplayHDR 600, which is a step above the 400 nits of other gaming monitors but it’s still not that bright. It’s more effective in games like Horizon Zero Dawn, where the colours are more vibrant and blacks are more pronounced, but most scenes in Resident Evil Village are too dark to truly benefit from the small highlights it provides. Local dimming also doesn’t seem to make a great deal of difference, but it’s still a wonderful entry to HDR gaming and yet another feature on a pretty stacked monitor.

The only thing missing here are speakers, but the Odyssey G7 doesn’t need to be any bulkier than it already is and built-in audio never matches the quality of the best computer speakers, anyway. It has a 3.5mm headphone jack to help you manage cables rather than stretching wires all the way to your tower, though, which is a bonus. 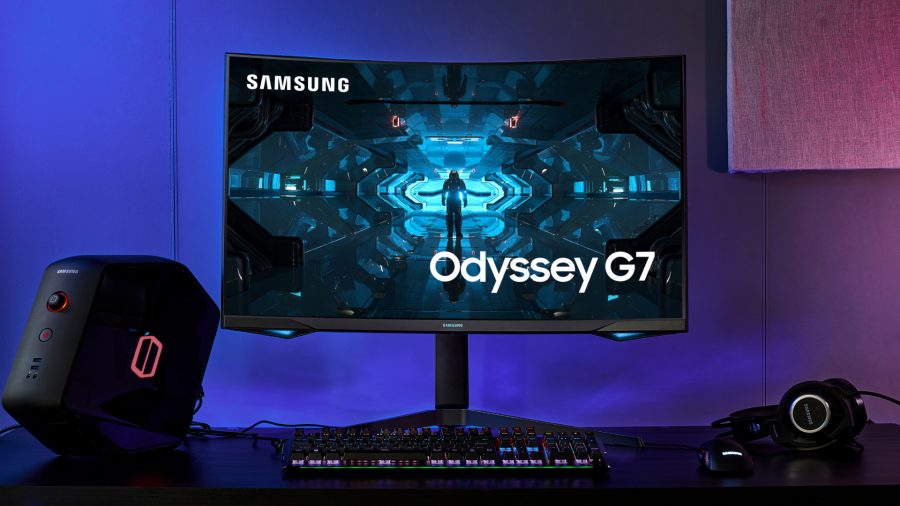 Currently, the Samsung Odyssey G7 sits in a class of its own, being the only gaming monitor to balance a high refresh rate with an equally high resolution on such a large screen. Throw in an astoundingly well-calibrated VA panel, HDR, adaptive sync, and the most immersive curve we’ve seen yet, and it’s difficult to argue with the $700 / £499 list price for the 27-inch version and $800 / £599 for the 32-inch model – both of which are up to $50 lower if you look around.

Until these combinations become more prevalent, the only display that comes close is the Alienware 27 AW2721D. It’s wonderfully colourful with an IPS panel, but forgoes the curve, only offers a 27-inch option, and charges $825 / £685 after a discount from its original $1,100 / £863 price tag. Conversely, Samsung makes very few sacrifices to reach the Odyssey G7’s MSRP, packing unrivalled value for money.

The Odyssey G7 is more function over form with some of the most impressive specifications we've seen in a gaming monitor yet, balancing 1440p resolution with 240Hz at an agreeable price point. It's only suited to those with the space for it, however, as it's a bit of a chonk.