The Samsung 970 EVO represents the evolution of the Korean giant’s stacked 3-bit MLC memory tech, and shows just how dominant the company is in the SSD market. No-one else comes close… so if you want the best SSD, you want Samsung. And the best got better, too.

Samsung has been making the best SSDs for the last few years and don’t seem to be letting up. You can argue, as I have before, that it doesn’t have things all its own way in the old-school SATA space, with Crucial able to give as good as they get with drives like the Crucial MX500. But in terms of the speedy NVMe SSD they’re more or less unrivalled.

Now, the $248 (£226) Samsung 970 EVO 1TB drive, isn’t exactly making technological waves itself – it’s only marginally faster than the previous generation of Samsung 960 EVO and 960 Pro SSDs – but the next-gen drive arrived at the same price points, with greater endurance, higher capacities, and a longer warranty.

And with NAND pricing being what it is, this speedy 1TB NVMe drive has practically halved in price since launch.

While the 970 EVO is using the same NAND flash memory as did the previous generation of EVO SSDs, the 3D 3-bit MLC (commonly known as TLC) is still pretty much as good as it gets. And Samsung has still made some changes to the rest of the design of the 970 EVO. 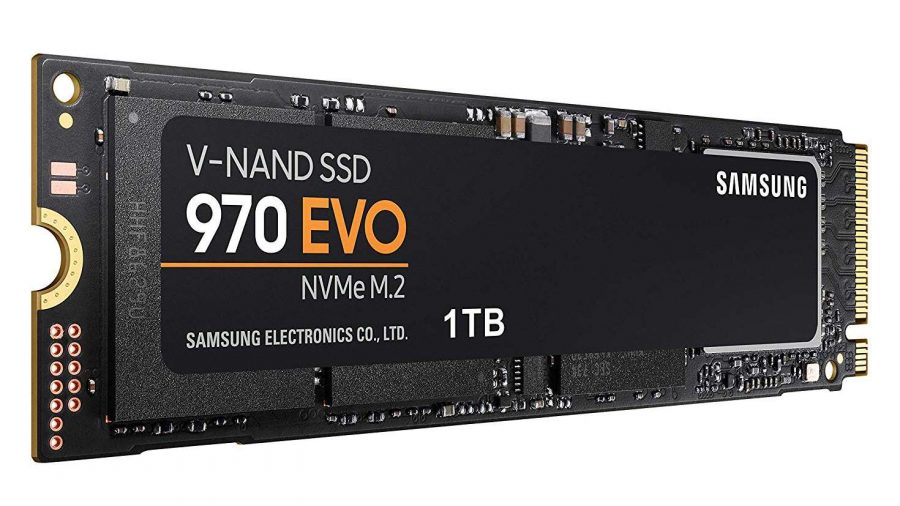 The NAND might be the same, but the cache memory has changed, with the updated drive making the move from LPDDR3 up to LPDDR4. The 250GB and 500GB versions of the 970 EVO have 512MB of LPDDR4 and the 1TB and 2TB drives have 1GB and 2GB LPDDR4 cache respectively.

Read more: Samsung is all over the best SSDs for gaming

The new cache memory is, at least in part, what allows the 970 EVO to offer a 25% lower idle power level than its predecessor. That should make this PCIe drive quite a tempting option in terms of gaming laptops.

But Samsung has also made some changes to the all-important memory controller, and that is where it’s claiming to have made the big moves which deliver the 970 EVO’s faster data transfer speeds compared with the older 960 EVO drives. 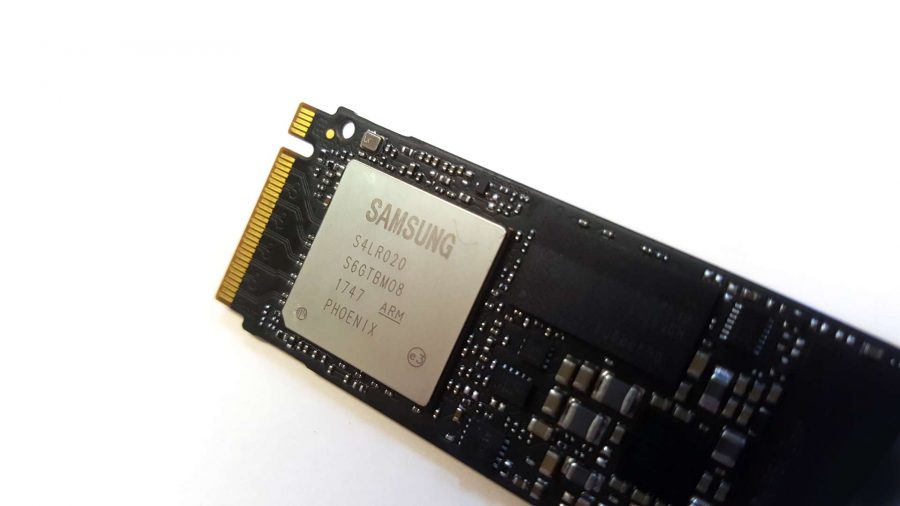 The Samsung Phoenix controller may have the same 5-core design as the old Polaris controller – giving it the necessary parallel data processing chops – but they’ve bumped up the chip’s clock speeds to squeeze a little more transfer juice out of it.

Because it’s a completely bespoke, in-house design, Samsung has been able to play around with it to its heart’s content. That means it has complete control over it and can tailor the controller’s inner workings specifically to its own memory, also made in-house. It’s this self-contained design and manufacturing strategy which makes Samsung almost impossible to best in the high-end SSD game.

It’s also what allows it to be so confident about the performance and longevity of the Samsung 970 EVO. It’s offering the same 5 year warranty as the straight MLC-powered Pro drives of the last generation despite using the weaker TLC memory. The rated endurance of the 1TB drives has gone up from a total of 400TB written over their lifetimes to 600TB. Considering the more expensive 960 Pro 1TB is rated at 800TB, that’s pretty impressive.

What does that all mean in terms of straight performance? Well, the Samsung 970 EVO is certainly faster than its predecessors – even the speedy Pro versions – so that’s a win. But they’re faster in a way that’s not entirely tangible for the end-user.

The sequential read and write speeds make great reading, especially the compressible data performance. Forgetting the always optimistic ‘up to…’ rated read/write performance, being able to comfortably top 3GB/s in read speeds sounds exciting, but you’re still not going to feel the difference in performance in day-to-day usage. The higher incompressible write performance, however, is much more impressive – the top-end Samsung 960 Pro drive struggled to top 2GB/s while the 970 EVO, which is this generation’s second-tier drive remember, easily hits 2.4GB/s. 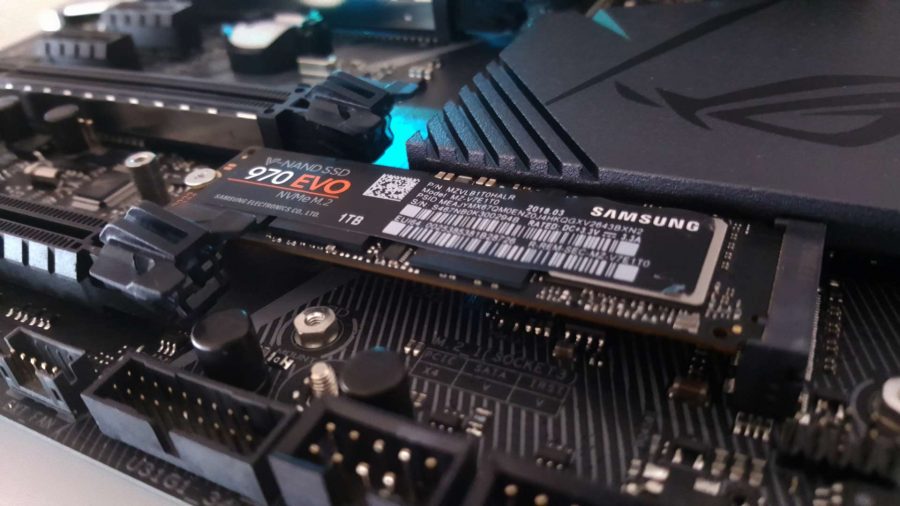 Most of this extra pace seems to have been generated by the speedier Phoenix memory controller, because the Intelligent TurboWrite technology is still operating at the same level as with the last gen EVO drives. It’s a feature that apportions a small amount of the drive’s capacity to act as single-level cell (SLC) memory, which performs quicker than the triple-level cell (TLC) standard. The Intelligent part, which was introduced with the 960 EVO, allows the drive to allocate extra storage to this SLC cache if a specific data transfer needs it (i.e. is over 4GB in size) and there is enough spare capacity on the SSD to allow it.

Like the 960 EVO, the 1TB version of the Samsung 970 EVO can add an extra 36GB to the TurboWrite pot, offering a total potential SLC cache of 42GB. That’s how, despite using slower TLC, the EVO drives are capable of similar performance levels to the resolutely 2-bit MLC Pro SSDs.

But the random performance isn’t as modestly exciting as those sequential performance numbers. The 4k random test represents the sort of tiny files that your system is constantly reading and writing when it’s managing a PC’s operating system. If it’s able to shunt these around quickly then it will feel slicker than when running off a drive that can’t.

Unfortunately, while the TurboWrite tech can help on the big sequential transfers, the 970 EVO isn’t offering much of a performance uplift when it comes to the 4k random read/write speeds. In fact, it looks like the random performance is about the same and sometimes marginally worse. Either way, it’s certainly not an unprecedented level of OS performance on offer.

It also gets a bit toasty too. Though it never seemed to affect performance – the 970 EVO didn’t throttle at all – it is noticeably warmer than the previous generation of drives. Potentially those higher Phoenix clock speeds are to blame there. Y’know, the whole phoenix / flames shebang… 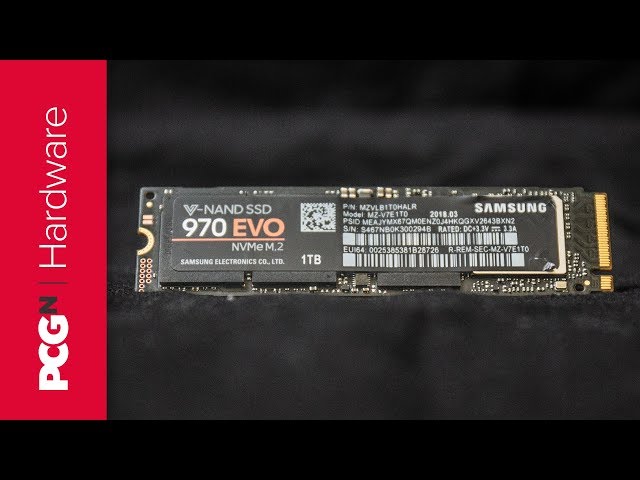 But the Samsung 970 EVO is still definitely the best mainstream NVMe SSD you can buy right now, at least in terms of straightline performance. At around $250 the 1TB 970 EVO maybe isn’t great value when we’re talking about basic storage, but if you’re after the fastest SSD for your gaming rig it’s hard to look past.

The 500GB version, however, is around half the price of the terabyte drive and will offer essentially the same level of high-end performance for the majority of your most oft-played games. You could then use a more parsimonious SATA SSD to cater for the rest of your data, or even, heaven forbid, an anachronistic HDD.

In the end the Samsung 970 EVO’s name makes sense here – it’s evolution, not revolution. But when this new generation is faster than the last, with higher endurance, and with a drastically dropping price-tag, that’s not a bad combination.

The best mainstream NVMe SSD around today, offering a great combination of high endurance and serious storage speed. And finally, at a great price too.