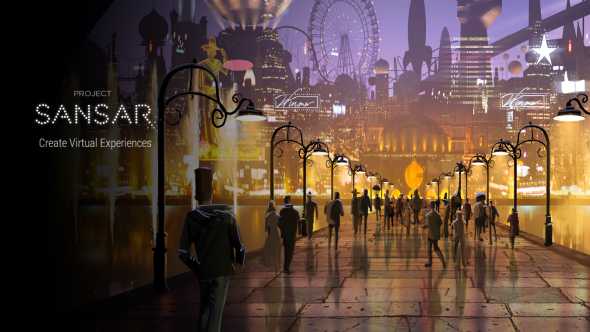 Second Life creators Linden Lab don’t often come up in conversation in gaming circles, but they’ve managed to make us sit up and pay attention a couple of times in recent years. First it was the sadly cancelled Minecraft-alike Patterns, under the guidance of Sims 3 megabrain Rod Humble. And now it’s Sansar, a new project which applies much of what makes Second Life tick to VR. Namely, user-generated 3D worlds.

“No longer is VR limited to just professional developers and engineers,” say Linden in their explanatory video.

The idea is that users will fill environments with art objects – either their own, Linden’s or those downloaded from a community asset store – and invite others to explore them. The Sansar editor allows for lighting, spatial sound and scripting if they want to get particularly ambitious.

Linden’s demonstration environments play with some of the most entertaining possibilities in VR. They mess with scale, letting users become Kong-sized, car-throwing menaces in miniature cities, or transport them to lavish ballrooms with high ceilings.

Users can show off their work by walking through it alongside a mate’s avatar. Or perhaps architects might use Sansar to display their designs to clients in first-person. Linden envision virtual TED-style talks, classes and cinema screenings.

“Sansar is going to change the way we live our virtual lives,” they say.

Shoot for the moon, and you might succeed in 3D modelling the stars. Right now Sansar is invite-only – you can register for an invite on the Linden site – but an open beta is coming this spring.

In the meantime, read about the sex bed empires of Second Life.