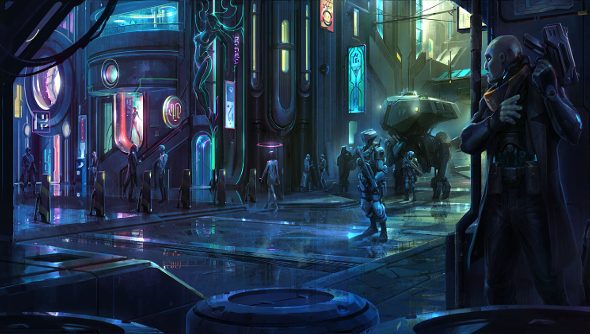 The rain-slick streets of Satellite Reign, illuminated by gaudy neon signs and tread on by punks with bits of future tech sticking to their bodies, feel like home. This should be particularly true for anyone raised on a diet of Blade Runner, Neuromancer or, indeed, the Early Access game’s 22-year-old progenitor, Syndicate.

It’s a place that doesn’t exist, but is so informed by years of dystopian cyberpunk media that you’d swear you’d visited it before. That doesn’t make it any less striking, as you navigate the urban maze with a team of four operatives up to no good. Pre-alpha though it may be, 5 Lives’ big, open tactical game is already more than capable of impressing.

It doesn’t let you forget that it’s pre-alpha, however. Plastered on the screen at all times is a big disclaimer, and more often than not, clicking on something or reading some text results in disappointment, as you’re informed that this or that feature is not in the game yet. There’s a lot to do, regardless. 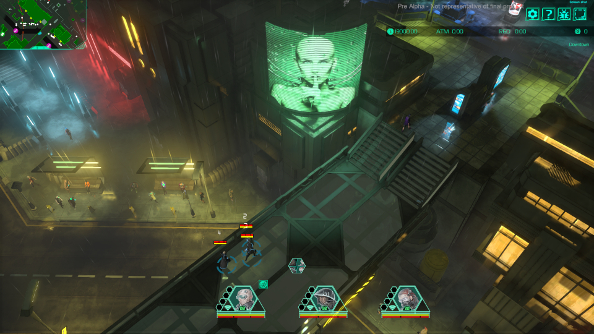 Dodgy corps to infiltrate, warehouses to rob, operatives waiting to be turned into assets – the squad has a busy evening ahead of them. Who is this squad, though?

Each of the four-person team has a specific role, with special skills and abilities. The infiltrator can fire up his cloak, hiding from cops and security; the support agent can scan crowds, worming his way through their digital lives to snatch important bits of information; our pal the hacker can jack into all sorts of things, switching off cameras or siphoning off cash from ATMs; and there’s also a shooty man who is good at shooting things.

What they really are, though, is potential solutions to tactical puzzles.

The team can be controlled individually or as a group, with the player taking on the role of Oracle to the agents’ Batman. The high up, isometric view is like a security camera, swaying ever so slightly. 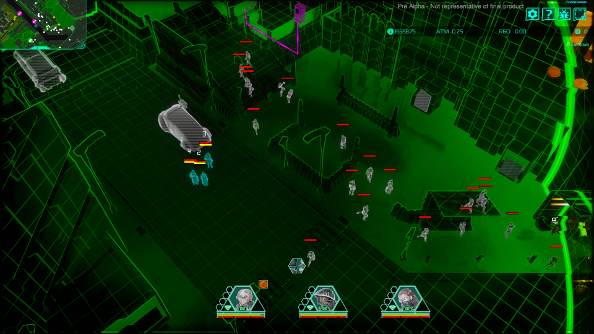 Downtown, Satellite Reign’s first area, has a series of non-linear missions that can be approached in any order, though the game advises players to start with a specific one first: free the tanky gun-nut, who has been taken into police custody.

How you free the lug is really up to you. Throwing cash around gets some extra intel, highlighting particular solutions, like ziplining from another building, over the walls of the police station. Lamentably, such a flashy entrance was beyond me, because I didn’t have the gear or the skills, but there’s always another way.

An informant gives me a heads up: there’s a back entrance and it’s completely unguarded. Perfect. My hacker jacks into a police car so we can get to the entrance in style, and then we slip through the back door and into the cop-riddled compound. Hacking saves the day again when my agent knocks out the CCTV cameras and unlocks the security doors to the cells. We manage to slip in, rescue our bud, and sneak out without raising a single alarm or exclamation. 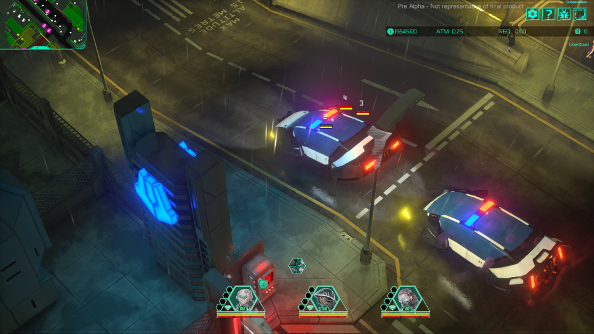 Missions don’t always go off without a hitch, though.

A storage building will be easy to break into, they said. It won’t be swarming with heavily armed guards, they said. Liars. With my four agents reunited, we were hitting a corp’s warehouse, which held the promise of fancy tech.

The entrance closest to our objective was immediately out. Big security door, four guards patrolling in twos and a camera hovering right over the door. So we go the long way around. 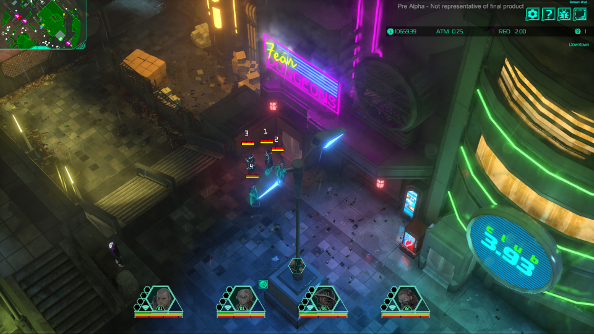 Through a car park filled with storage containers, my squad weaves in and out of cover, counting down the seconds before the cameras turn their eyes away from where the team needs to be. It’s going smoothly. Until it isn’t. A guard spots us, but we open fire first. Three remain behind low cover, while one goes around a container and strikes the guard from behind. Unfortunately, everyone knows where we are now.

The puzzle changes. The goal is no longer to sneak into the facility, it’s to stop the guards from gunning the whole team down. Conveniently, a solution presents itself rather quickly. A big transformer, it’s blue glow lighting up the area around it, is right in front of us. When it explodes, the power goes out. That means no cameras and, more importantly, broken security doors. Half of the guards are now stuck.

Lamentably, in this case the reward isn’t worth it, being an item that’s yet to be implemented. On the other hand, we find a scientist to bribe, who joins the research team, producing weapons from prototypes and other gadgets. So it’s not a complete loss. 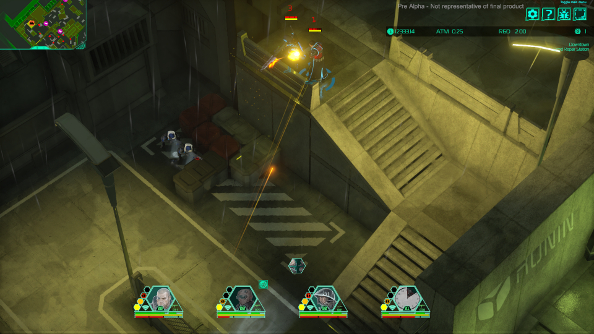 So there’s a lot of fun to be had and it’s full of option-rich tactical shenanigans, but being pre-alpha, more often than not, things are missing or simply broken. Other missions failed to complete due to bugs, and an attempt to mind control a civilian ended up breaking my entire squad. When it all works, though, and when it’s not telling you that you can’t do something because that feature doesn’t even exist yet, it’s brilliant.

It’s Syndicate. Not the actual Syndicate, mind, but the one that exists in the memories of those who played it over 20 years ago. And that’s a real treat. But if you’ve waited this long for it, you can probably wait just a wee while longer.