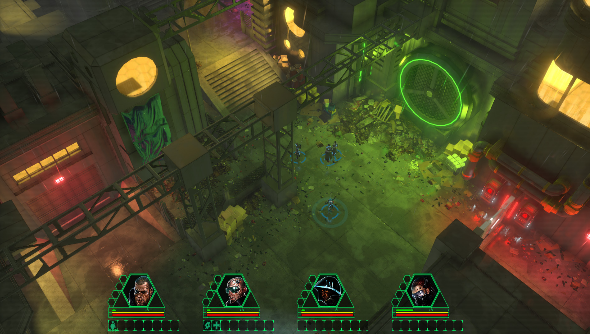 5 Lives Studios have infiltrated Steam Early Access with Satellite Reign, their Kickstarter success that bathes itself in the nostalgia of the original Syndicate games. You can buy the game right now and start parading your team of agents through the first zone.

Discussing the release on their Steam catalogue page, 5 Lives say: “Satellite Reign is an open-world, non-linear game, set in a cyberpunk city. The city is divided into four main districts, each one themed and controlled by different factions. This initial release contains the entirety of the first district, the Downtown District.

All of the districts have been built, but the Downtown District is designed as the first area players will explore, and so we feel it is the best area to serve as a test-bed for our core mechanics.”

Despite being pre-alpha, 5 Lives assures potential purchasers that the game is as stable as it can be, but do expect to hit bugs primarily in unit pathfinding and AI behaviour.

Included in the first area are missions and quests for your agents to get involved with, a fully-functioning, destructible cover system, all four agent classes, and weapon upgrades.

The Early Access version comes in at £22.99, which is the price that it will remain at when it becomes a finish product in the first half of 2015. For now though, you can grab it at a 10% discount. Backers of the Kickstarter who pitched in enough money to receive the game should already have received their codes.