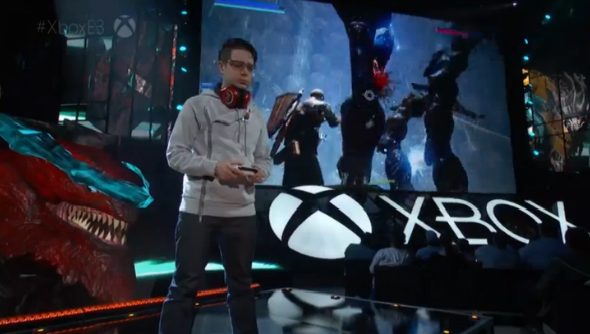 Dragon prayers: answered. A proper Platinum game is coming to PC at the same time as its console debut, and it’s dragon-riding, monster-killing, apparently bow-firing Scalebound to do it. Confirmed at Microsoft’s E3 press conference, they also showed off a humongous boss fight between the player, some co-op partners and a giant … bug … dragon … thing.

It’s all very explosive, still featuring the world’s most annoying main character – even more so than a recent British addition to that category – and quite confusing.

The addition of multiplayer is so odd for Platinum, who haven’t bothered with co-op in even their more budget tie-in titles from recent years. It still looks a little awkward, when it should be the greatest game of all time – Platinum plus dragons, where can the mistakes be? Hopefully, not still present in the final game.

It will hit PC, along with Xbox One, some time next year. Might be one for the old 360 controller. Hopefully it’s not the last Platinum game coming soon – Bayonetta and Vanquish always remain much-requested wants.