There are certain games that are undisputedly considered ‘classics’. From the titles that defined a generation like Half-Life 2, to modern masterpieces like Dishonored, both critics and fans laud their accomplishments and hold them up as examples to be followed.

Even those featured on our best PC games list aren’t safe from negative user reviews!

Of course, even when things are clearly brilliant, there are still people who hold opinions that could be considered, for lack of a better term, wrong. Hidden among user reviews you’ll find the ravings of gamers who need you to wake up and stop following the crowd, because that game you love is, apparently, objectively garbage.

Here we’ve gathered together some of the… oddest verdicts for classic games from Amazon and Steam’s user reviews. Because remember: just because you and literally everyone else you’ve ever met loved it, doesn’t make you right.

(Also, in an attempt to make the user review process an all-round better one, we’ve included links inviting you to contribute to our own, templated user reviews engine. If you could drop in a verdict or three then we’ll love you forever.)

Back in 2005 Steam wasn’t the One True Religion is it now, but considered the very embodiment of the antichrist. This review really demonstrates the hate and frustration for the always-online system, but it’s the ‘GREAT GAME PLAY!’ comment that appears out of nowhere that makes this review a little gem. 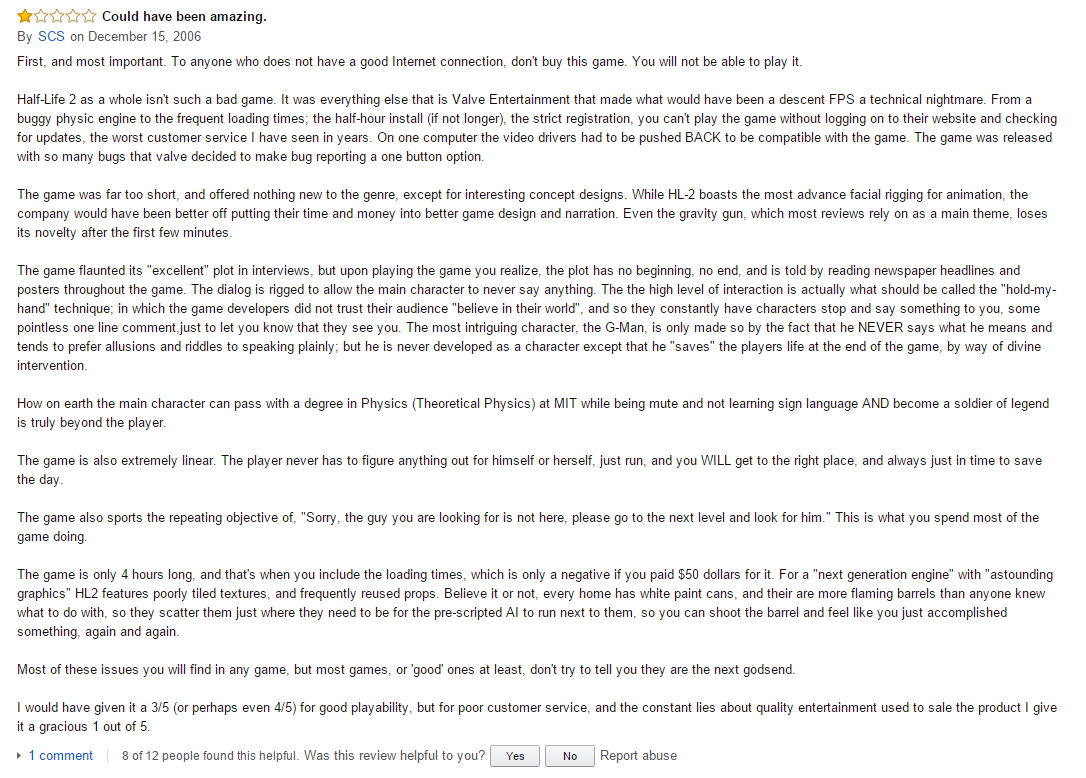 Among the ramblings of this review are harsh criticisms for the fact that Gordon, hero of Half-Life 2, is a silent protagonist. The fact that he’s got a PhD in Theoretical Physics despite not being able to talk is clearly impossible, and thus causes a massive dent in anyone’s ability to enjoy the game.

Think these guys are wrong? Why not write your own Half-Life 2 review over at our reviews page. 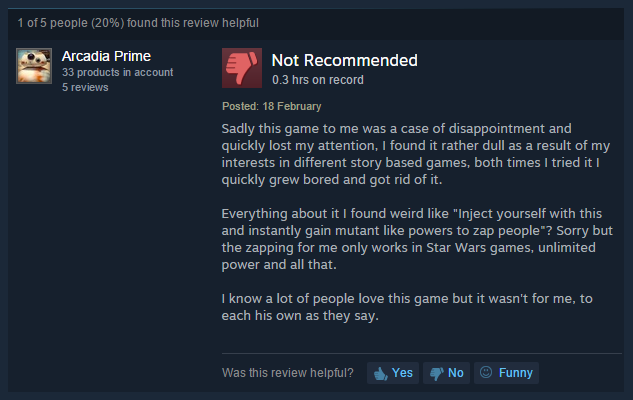 This Steam review takes offence to the idea that Bioshock dare attempt to include lightning-based powers, since they’re clearly the copyrighted intellectual property of Star Wars. We’ll be in touch with Irrational Games shortly to demand royalties are paid to LucasFilm.

If just being too weird wasn’t bad enough, Bioshock is also the reason the world is rotting from within. The game’s moral quandary regarding the killing of Little Sisters is most certainly the direct path to the downfall of civilisation.

Do you love Rapture more than these guys? Tell us in a Bioshock review.

This very frustrated Amazon reviewer decries the brilliant Deus Ex: Human Revolution for its difficulty, criticising it for making them replay four minutes of gameplay each time they died. Please, for the love of all that’s holy, don’t tell them about Dark Souls… 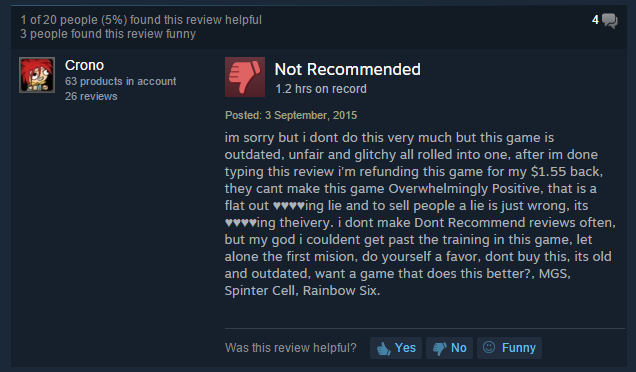 Over on Steam, praise for the original Deux Ex is similarly confused. Apparently an old game being old in 2015 is a horrifying crime against humanity. Crono suggests that the Overwhelmingly Positive user rating is a conspiracy to encourage sales, which admittedly does tie in nicely to a game about corporate agendas.

Convinced Deus Ex is the best game ever made? Sing its praises in your own Deus Ex review.

Dishonored, the game with Thief-like mechanics and a grim, Victorian aesthetic is apparently a rip-off of Bioshock; an art-deco FPS where you shoot bees from your fists. A very astute observation, nameless Amazon customer.

Dishonored is many things, but an RPG it is not. Yet while not being an RPG, this Amazon reviewer is happy to drag it through the one-star dirt because it doesn’t have an open world, apparently the ‘only good aspect’ of RPGs.

Love sneaking it up with Corvo? Tell us all about it in a Dishonored review.

Talking of brilliant stealth games, Thief II is apparently really not worth anyone’s time, since it requires an awful lot of something called “patience”. Since you were considering buying a stealth game, you may not have realised this prerequisite.

Tell us why it is a stone-cold classic in your own Thief II review.

As you may have heard, innovation is the number one enemy in games today, and any attempt to change a game’s formula six games into the franchise is heresy, even if that change does make it one of the finest open-world games of all time. Shame Jexxi didn’t notice the ship on the front of the box…

Of course, even if you’re on board with pirates, Black Flag is missing a certain something. Presumably reviewer R.W. Jamison also submitted a letter to his favourite games magazine decrying the absence of peg legs, too.

Despite discovering Black Flag wasn’t for him, this reviewer continued to plough through and collect 90% of the games many achievements. Having enjoyed games before, he assumed he’d like this one too, which I guess is a reasonable assumption. Not only that, but he also notes the lack of parrots in the game, and considers it a key element in awarding the game a solitary star.

A fan of the pirate life? Draw us a map to the best bits of the game in an Assassin’s Creed IV: Black Flag review.

For reference, this is the control panel for a Boeing 747. Please compare with your keyboard.

Explain to us how Looking Glass changed the videogame world forever in a System Shock 2 review.

It seems this reviewer is confused about what ‘gameplay’ is, considering they claim that Skyrim has no gameplay at all and then proceed to list an entire paragraph of the game’s mechanics.

Is this the best Elder Scrolls game ever? Tell us all in a Skyrim review.

RPGs are typically as much about negotiation, diplomacy, and conversation as they are about blasting the brains out of evil naer-doers, so it’s quite confusing that this Amazon reviewer would grant the stellar Mass Effect 2 just a single star for talking to ‘one million people’. Embrace socialising! Enjoy a good natter with a blue-skinned space hooker!

Think the suicide mission is the best thing Bioware have ever done? Get excited in a Mass Effect 2 review. 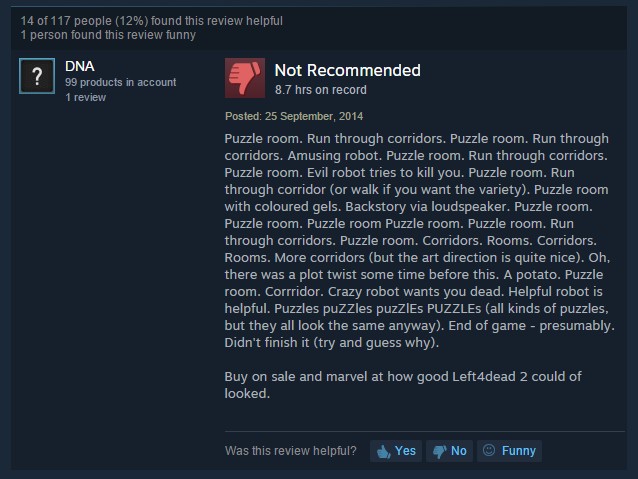 DNA decided to slam a big thumbs down on Portal 2 because it works exactly how a game should. Apparently being a collection of mechanics that function in a sequence just isn’t good enough these days. Look at all those disgusting puzzle rooms! How dare they infect this puzzle game!

“This game is all about puzzle solving” laments this review, seemingly surprised that a puzzle game would be entirely about the puzzles. “There’s no real adventure” it cries, seemingly hurt that the game about pretend physics experiments refused to take them on a globe-trotting expedition.

Did Valve bend your mind at Aperture Labs? Tell us what you loved in a Portal 2 review.

There’s not a lot to get about Minecraft; it’s a game where you fit blocks together to make things. There’s been a pretty solid tutorial in the real world for a while called Lego. Combine that with your own natural curiosity and you’ll get the hang of it. Unfortunately, that’s just not enough for this father and son.

Minecraft’s big appeal is, of course, that it’s endless. That’s precisely why there are a billion-and-one videos dedicated to it on YouTube. Perhaps Tony was shipped a defective copy of the game, then, since he seems to have exhausted the game’s limitless possibilities in five days.

Do you love big blocks and cannot lie? Then head over here and write a Minecraft review.

Have you ever read a bizarre, misguided, or just down-right wrong user review? Share your favourites in the comments.