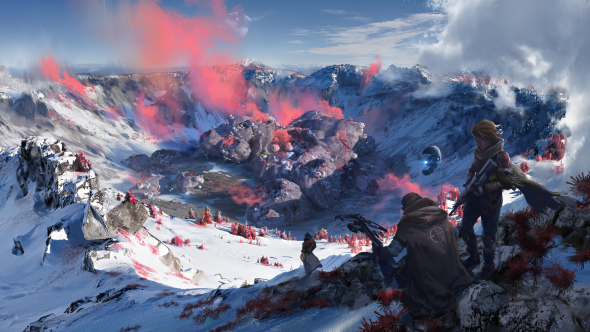 Halo 5: Guardians was not meant for us. Master Chief’s latest adventure was as distant from the PC as the Covenant-controlled planet of Kamchatka. Well, its Forge mode did eventually pop up on Windows 10 as an estranged standalone release, but that was not the game’s real innovation – we were short changed even then.

Read more: Bill Roper on the multiplayer innovations that have changed everything.

What we should have got was the sprawling multiplayer mode Warzone. It flits between teamfights and NPC boss scraps, with its most thrilling moments having the two parts layered on top of another, forcing three-way shootouts unlike anything else in the series.

Despite its successes, however, former Halo creative director Josh Holmes remembers Warzone as a compromise.

“It became a bit more focused on the PvP,” he tells us. “That was down to some of the limitations that we faced with a single server. Both PvP and PvE are equally prioritised in Scavengers.”

Scavengers is Holmes’s new game with Midwinter Entertainment: a multiplayer shooter that leverages the power of SpatialOS, a technology that combines servers in the cloud to bring about broad scale and deep simulation. In Worlds Adrift, SpatialOS means persistent floating islands and physics-based airships. In Scavengers, it means dropping you and a team into a frost-blasted wasteland where hundreds of sophisticated AI enemies hunt. It means Warzone+.

The idea that Earth may have fallen into a new ice age is a perennially popular one among news outlets, and provides Scavengers with a promising setting. Teams of survivors will search a winter wasteland for supplies in the first phase of a match, knocking together weapons and equipment. After that they head deeper into the wilds, vying with other teams to complete objectives that will contribute to their score and persistent progression. Finally, each team must escape the map before they succumb to the cold or the NPC armies that brave it.

These three phases make each match a journey. This is not a quick exchange of fire, then, because journeys take time. The team at Midwinter are currently experimenting with sessions between 25 and 45 minutes in length – a period of time equivalent to a match in a MOBA, over which you and your team will gradually accrue power. 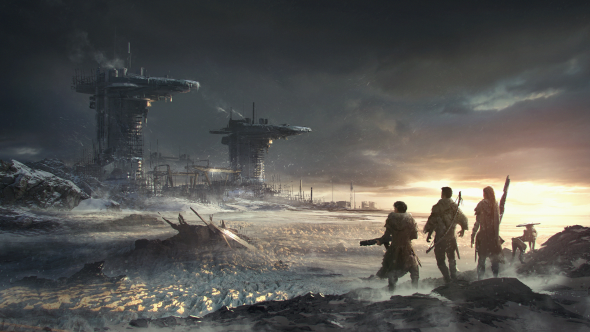 “We want to see what feels like the right amount of exploration, downtime, and tense travel from pocket to pocket of combat,” Holmes says. “How do we get that sense of build throughout the course of the map, so each match feels like it has a natural climactic conclusion?”

The varying pace of Scavengers is enabled by the sheer scale of the map Midwinter are building with SpatialOS.

“Our map is a vast, explorable space,” Holmes notes. “Winter plays a big role within the game, and the aspect of dealing with the cold and storms that are part of the world becomes a big part of the challenge of surviving.”

The exact nature of Scavengers’ survival mechanics are up in the crisp, cool air at this stage, but Holmes wants you to be constantly juggling the threat of the environment with that of other teams and NPC hunting parties. 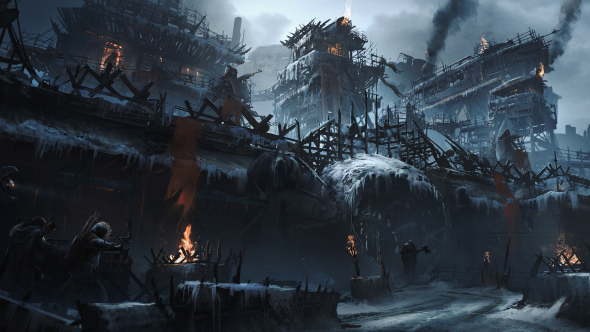 “We’re trying to create the sense of a complex living ecosystem across the world,” he says, “with intelligent AIs that are able to interact with one another as well as the players, and create emergent gameplay opportunities as a result.”

Each of the three AI factions are distinct groups with their own motivations, “not aligned with each other in any way, shape, or form.” The Outlanders are the remnants of humanity, eking out an existence in the extreme cold as hunters and foragers. Their behaviour is markedly different to that of the Scourge, an alien parasite that has mutated life across the planet, driven by base instincts and a need to spread. The third group, a race of sentient robots called the Salients, are under wraps for now, but will represent the fate of technology on this blighted Earth. They, too, will act according to their own artificial personality.

“Once you’re in direct conflict with those AIs, we want to create something that’s endlessly challenging and fun for players to engage with,” Holmes says. “Here we’re drawing on a lot of the experience of our team in building shooter AI in games like Halo.” 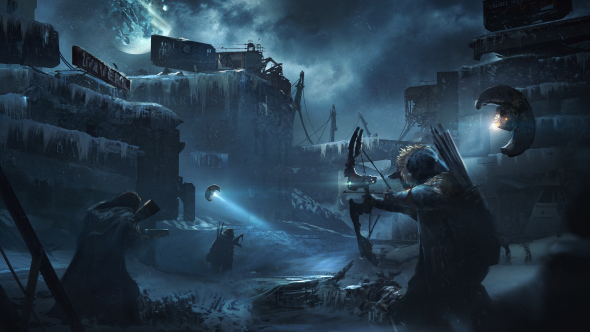 Midwinter have had fun fiddling with Scavengers’ high-level simulation, playing factions off against each other.

“They can be capturing areas of the map and becoming the dominant force in an area, feeding back into the moment-to-moment gameplay in really unpredictable ways,” Holmes enthuses. “That’s really exciting for us.”

This is the kind of ambition you tend to associate with very early previews of shooters, only for their developers to fall silent for a few years and return sheepishly with something more conventional. But Holmes seems done with compromise, and the technology needed to pull off Scavengers is here now.

“SpatialOS gives us the ability to create a much more densely populated, believable experience for players to adventure within,” he says. “It’s really cool to be able to move through a living world as a team, knowing that you have these twin threats between the environment and AI you’re exploring, as well as the other players you’re competing with to survive. That dynamic is pretty exciting and unlike anything else that’s out there.”