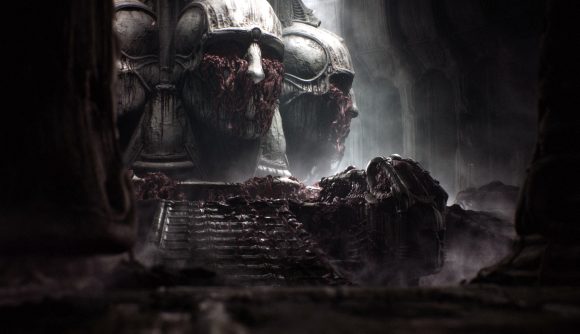 It’s been a long time since we’ve heard anything on Scorn, the horror FPS inspired by the twisted works of Alien movie designer H.R. Giger. Finally, the Kickstarter-backed atmospheric shooter has had its release date confirmed – but it won’t be out until October 2022.

Nightmarish horror adventure Scorn was announced all the way back in November 2014, suffered an unsuccessful Kickstarter, re-announced in 2016 before going to Kickstarter once again in 2017, where it raised €192,487 – over €40K more than its goal. Aside from an impressive gameplay demo running on next-gen hardware in 2020, there hasn’t been much on Scorn leaking out – let alone a possible release date.

Now, finally, developer Ebb Software has confirmed exactly when players are going to be able to experience the gross, fleshy world of Scorn – and it might not be as soon as anyone hoped. In Ebb’s latest Kickstarter update, the team confirms that Scorn will be officially launching in October 2022 – eight years after it was originally announced.

According to Ebb, announcing the game for release all the way off in October means that “this additional time will allow the team to make sure the vision for Scorn comes to life in all its spine-chilling, nightmarish glory”. The team realises this means “a longer wait” for Scorn’s backers, but it is “committed to making Scorn the best experience possible for our players and fans”.

Will Scorn make it into our list of the best horror games on PC, alongside Alien Isolation? Guess we’ll find out this time next year.