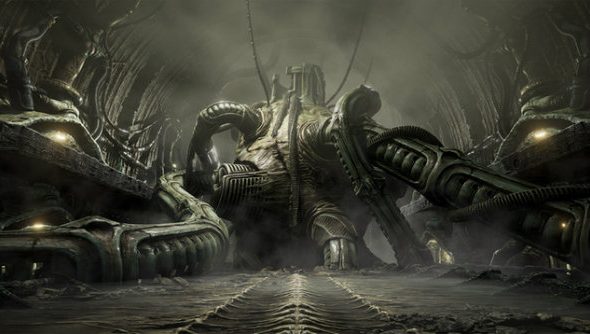 Riffing off the imagery in H.R. Giger’s alien ships, Scorn is a nightmare made flesh. It’s a first-person shooter with puzzle elements where you explore an organic facility filled with pulsating body horror.

If you’d prefer the shooting without the scares, check out our list of the best first-person shooters.

Usually when developers say “the environment is a character itself” I don’t lend the claim much credit, but Scorn’s environments might as well be, all fleshy tubes and stretched skin tapestries.

These environments can be explored in a non-linear fashion, though some will require special abilities to pass through. Each area supposedly folds back on itself in an interconnected, cohesive world.

It’s apparently rather unforgiving, too. There won’t be any hints guiding you, and it’s your responsibility to feel your way through the world, figuring out the purpose of any alien instruments you might find.

“We are trying to create something so unsettling it will make you think about the ideas and themes of the game long after you’ve finished playing,” said Ebb Software’s Ljubomir Peklar.

Scorn will be released in two parts, the first of which will arrive in 2017.