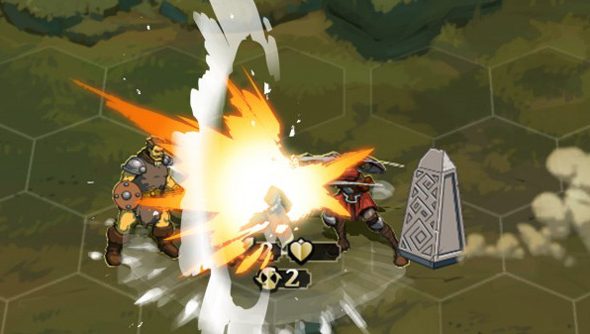 Mojang’s Scrolls has a future, and it’s not just on tablets. The upcoming port has grabbed headlines elsewhere, but here we like to focus on games that allows us to remain uncomfortably upright at our desks.

So: a less intimidating tutorial! A free demo! A weekly reward system! Attacks with more “oomph”! All this will help bring the Minecraft lot’s already rather popular CCG to a wider catchment of card-fancying humans.

“We’re aware that Scrolls can be intimidating for beginners,” writes Mojang’s Owen Hill. “To combat this, we’re replacing our existing tutorial with two snappier ones that’ll teach basic mechanics within a few minutes play.”

“Powerful attacks should have more oomph,” said Owen, “and enchantments should be more visually striking.”

That’s not all. Minecraft custodian Jeb is, it turns out, one of the most enthusiastic Scrolls players in the Mojang office. He’s been helping the dev team conceive of some new ways to reward Scrolldiers, as they’re known, at both highly competitive and low ranked levels of play.

Mojang say we ought to expect some sort of weekly reward system – I’m imagining something like Hearthstone’s challenges.

And somebody – either Mojang, or mobile devs Ludosity – will be putting together a demo version of Scrolls. While principally in the works for the App Store, it’ll provide “a slice of Scrolls gameplay for the curious” on the PC too.

Will all this be enough to tempt you into trying out Mojang’s lesser-known work? And did you know the company’s income more than doubled last year? Yup.