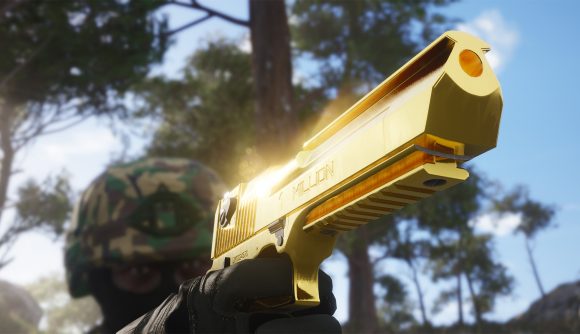 September 18, 2018 Scum has sold over a million copies, and players are getting free stuff in celebration.

The survival genre is doing more than surviving, if the latest Scum sales numbers are anything to go by. Scum has now sold over 1 million since launching less than three weeks ago, and developer Gamepires is celebrating by giving away golden guns and digital watches.

Until September 25, all players will get a golden Desert Eagle with “1 million” engraved on the side. “Players can get your gun through your prison wallet, the first time nature calls,” the devs say. If you’ve sprung for a Supporter Pack, you’ll also get the Nice Watch, regardless of when you log in.

Promo art in the official announcement shows the watch locked at 4:20, though apparently it will tell the current time in the actual game. It’ll get “more useful features” in future updates, hopefully including a toggle to leave it at 4:20 all the time.

The million mark means Scum has continued to sell well after putting up impressive numbers early on. It sold 700,000 copies during its launch week, and even with the expected slowing of sales after release, it’s still going strong.

If you’re unfamiliar with Scum, you might recognise its concept from plenty of other early access survival games. The twist is that players take on the role of criminals dropped on a deserted island to fight for survival. Oh, and it’s all broadcast on TV. It’s also pretty realistic – while Jordan was playing it in the office earlier, I was unfortunate enough to watch his character defecate in quite graphic detail, an attempt to manage a complex in-game metabolism.

SCUM has been in Early Access for one week and we can't thank the community enough for your support!

Our team is working hard on new updates, features, and content for our now 700,000 players! More news soon, prisoners. pic.twitter.com/7af7Z3lFkl

Scum was publisher Devolver Digital’s biggest ever launch on day one, with 50k concurrent players on launch day, and 250,000 copies sold in 24 hours. Scum also managed to top Twitch for a brief moment last week, doing so before it had even been fully released. With Fortnite regularly drawing in hundreds of thousands of viewers, that’s no mean feat, so expect to see more of SCUM in future.