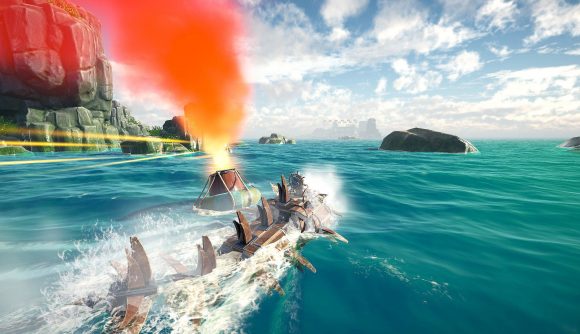 June 5, 2020 Sea of Craft will makes it debut at the Steam Game Festival, and there’s a new trailer to check out.

China-based studio Wizard Games has just unveiled a new naval construction game it has in the works that looks a bit like Sea of Thieves meets Kerbal Space Program – and there are plenty of multiplayer battles to be had in its open waters, using your own handcrafted vessels. Oh yes.

That’s according to the “physics-based construction game” Sea of Craft’s Steam page, which announces the upcoming indie title offers “a vast range of building materials and weapons to choose from, giving you infinite options for your creations.” From in-game screens shared by the studio, it’s reminiscent of Kerbal Space Program in that you have scope to build all kinds of weird and wonderful vehicles from the ground – or sea bed – up, from barrel-laden hovercrafts and flying cars, to shark-shaped sea crafts and more traditional-looking pirate ships with cannons.

“There are five major categories of ship modules,” the page reads: “base, power, physics, weapons, and decoration. Come up with infinite ideas for new ships with the help of over 150 modules!”

As well as jumping into over 30 “carefully designed Chapters” in a single-player mode, the page says, you can put your ships to the test and battle it out against others in a multiplayer mode, too. Take a look at a brand-new announcement trailer below:

In addition to the main game content itself, it seems there’ll also be plenty of scope for community-made creations, with the dev annoying players will be able to “download community favourites and upload your own creations at the Ship Expo”. Sweet!

Sea of Craft has been rejuvenated! These may waters witness relentless wars but they also offer pristine views. So much so that you might want to put down your Greatswords and take the afternoon off to enjoy the sun-kissed scenery 🌅#gaming #indiegames #screenshotsaturday pic.twitter.com/9H5RrMsxet

The game’s due to hit Steam Early Access (with a single-player mode) in September 2020. If you’re keen to know more, you can take a look at the game’s Steam page here, Twitter channel here, or join the game’s Discord server here.

Sea of Craft gives infinite options for your creations. Here are some of the ships you can build in #SeaofCraft!

In the meantime, we’ve also got some lists of the best building games, pirate games, and multiplayer games for you to take a look at if you’re keen to find something new to try while you wait.