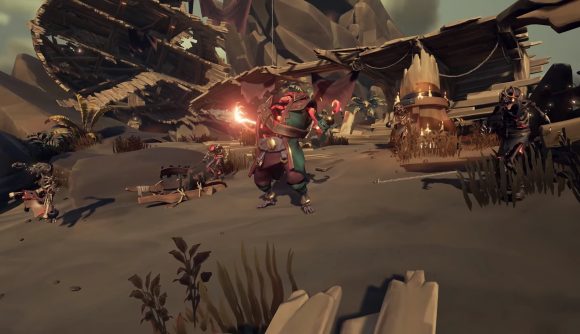 After a small delay to the Sea of Thieves Ashen Winds release date, the new update is now upon us. Thanks to the official patch notes, we have a better idea of what it includes, too. The spiciest addition is the titular Ashen Lords themselves, who are charred chaps that have returned from the grave to wreak havoc across the Sea of Thieves.

As the story goes, Captain Flameheart has raised his followers from the dead by bringing together tomes, jewels, and other ritual ingredients. His fiery friends aren’t what they used to be, though, and now walk the world as undead Ashen Lords. It looks like it’s your job to deal with that.

The new Sea of Thieves update has also seen the pirate emporium restocked with scored pets and other outfits and emotes. The new pets appear black in colour and are notably undead themselves, as you can tell from the bones on show. The Black Market has also been restocked, and now features Fearless Bone Crusher equipment and Nightshine Parrot equipment. Expect buckets, compasses, fishing rods, and more.

As for the rest of the tweaks, you can find them below, or the game’s website. Here are the Sea of Thieves’ Ashen Winds update patch notes in full:

Dealing Damage Through the Environment

Inactive Ships in The Arena

‘Let Games Read to Me’ Improvements