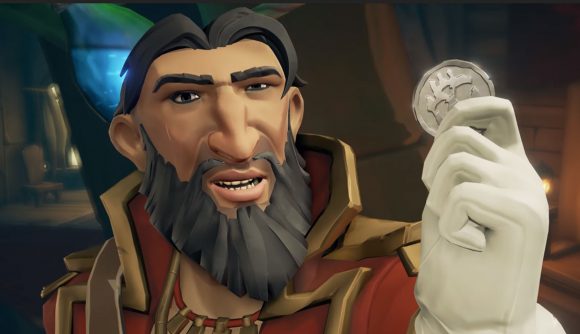 Rare has discussed Sea of Thieves features like pets and customisable emotes for ages, and it looks like those features are finally launching soon – through a microtransaction store, which the developers also noted was in planning well before the game’s launch. In a new developer update video, executive producer Joe Neate runs down the team’s approach to microtransactions and the new features.

Rare is adamant about its approach to in-game purchases. Neate says there won’t be anything that offers a power advantage, nor anything that separates players from one another. Every purchase will be optional, and “we always want you to know what you’re going to be buying,” which means no loot boxes or other blind purchase types.

Those purchases will include pets, new emotes, and fresh ship cosmetics. Pets will hit Insider testing later this week. They’d originally been in ahead of the Anniversary Update, but the developers decided they weren’t up to snuff for that release – so apparently they’re a bit readier now.

Sea of Thieves already has a base set of default emotes, but the purchasable ones will give you a broader range of animation options. These will hit testing a bit after pets. The new ship cosmetics will “celebrate much-loved games or characters,” not unlike the Banjo-Kazooie and Master Chief cosmetics we’ve seen in the past.

You can hear all the details in the video above.

It’s always good to hear about a cosmetic-only microtransaction system, but Sea of Thieves has always been about the cosmetics – getting cool, new gear is the game’s biggest long-term hook, and it’s always been a bit short on items to claim. Hopefully all these additions will continue to add rather than subtract from your time on the high seas.