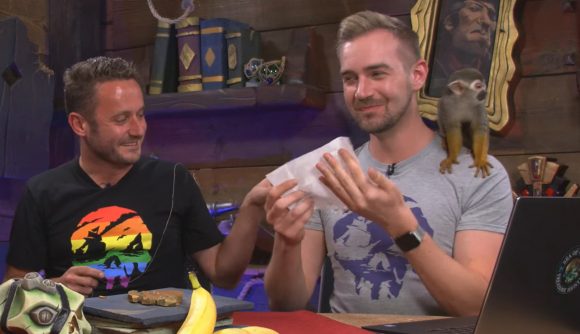 Sea of Thieves is getting pets in this month’s update. We’ve known the basics for a long time, and some more of the details have become clear over the past few weeks, but today the developers at Rare hosted a stream breaking down all the features of the new update. They also brought in a live monkey to add to the demonstration, but he added more than a cute face to the stream. A lot more.

Antonio is a seven year-old squirrel monkey, and an impressively well-behaved little guy who spent most of the stream gently hopping between the shoulders of the developers as they ran down the new stuff. But partway through, Antonio settles on the right shoulder of community manager Jon McFarlane and vomits straight down.

Now, monkey vomit might be enough to derail most developer streams, but the folks at Rare are gosh-darned professionals. After a brief break for laughter, they’re right back to discussing new skeleton ships as Jon starts cleaning up – then little Antonio hops over and vomits on Jon’s left shoulder, too.

While there’s no denying the presence of the monkey vomit, there is one other thing. The developers never acknowledged it, but it really looks like Antonio also poops on Joe. If it is feces, it’s just a tiny speck – and executive producer Joe Neate’s knowing look right after the apparent poop suggests that it did, indeed happen.

You can see the vomit in the stream above at 27:45. Poop is at 31:48. There is information on Sea of Thieves, which is a videogame, throughout the rest of the video’s runtime. (You can also find details on the official site.)

He may have puked but he’s still a little cutie @SeaOfThieves pic.twitter.com/vus3ziQlfI

Jon describes Antonio as “still a little cutie” after the stream, so clearly there’s no hard feelings.

The Smuggler’s Fortune update for Sea of Thieves will launch on September 11, and will bring a premium microtransaction store to the game, where you’ll be able to purchase a vomiting monkey of your own. Apparently the in-game pets really do vomit, too.