Crossovers aren't really cool anymore. Pitting Rambo against John McClane or Batman against Master Chief is now old hat in videogames – and typically, these media crossovers feel like nothing so much as a means to sell you $20 skins of your childhood memories. So while Sea of Thieves and Pirates of the Caribbean are a natural fit for each other, there was a little skepticism in the back of my mind about what form Disney's invasion of Rare's pirate sandbox would take.

That's why I was so pleasantly surprised when the developers led a recent preview session about Sea of Thieves: A Pirate's Life by talking about the lore. See, the Sea of Thieves itself is meant to be a timeless realm where pirate adventure never went out of style – if you knew where to look, you'd be able to sail there right now. Jack Sparrow, as a fan of this whole 'world where pirates have the freedom to do anything' idea and the owner of magical implements which can find things which should not be found, has found his own way into the Sea of Thieves.

The pirates of the Sea of Thieves also get eternal life, thanks to the ghostly machinations of the Ferryman – you know, the spectral captain you meet whenever you're waiting for the respawn timer to run out. That's why Davy Jones shows up. As a collector of lost pirate souls, he doesn't care for there being a place for buccaneers to enjoy unending lives full of adventure and loot. This collision of universes, the developers say, gives them a chance to explore the power of the pirate fantasy, and how concepts like 'freedom' define the mind of Jack Sparrow and the world of Sea of Thieves.

“The right story is the key to all of this. It has to be the right story, told with authenticity, told with incredible care, to ensure that it’s not just a crossover in the one-dimensional sense,” creative director Mike Chapman tells journalists in a Q&A session. “It’s a true interweaving of the worlds – in a way that makes sense in terms of the lore of both worlds, but also enhances the lore of Sea of Thieves. That has been absolutely critical to us.” 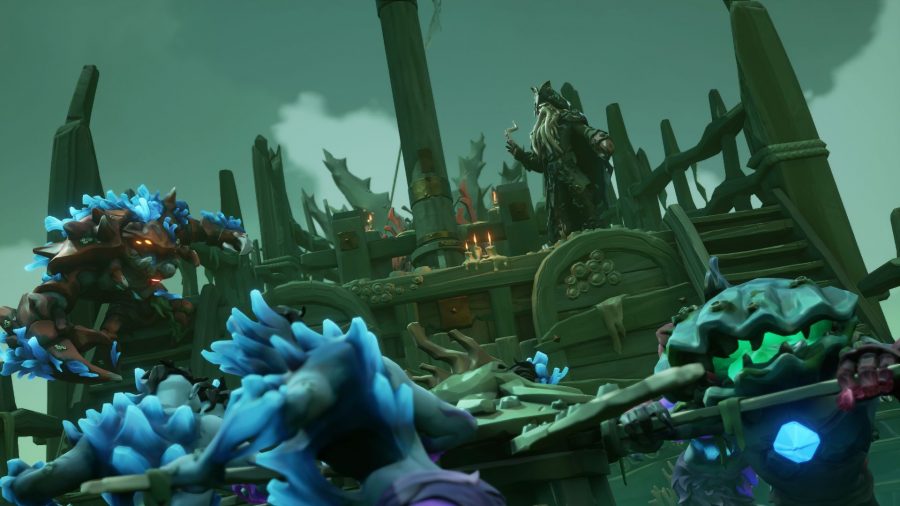 In other words, Rare is serious about this one. A Pirate’s Life has been in active development since March 2020, and the devs reckon that this is the biggest update yet for Sea of Thieves. There are five new story-driven Tall Tales quests, each of which has its own unique locations that draw from the lore of both Pirates of the Caribbean and Sea of Thieves. These missions introduce three new enemy types and a new weapon that will spawn dynamically around the normal pirate sandbox, too.

You’ll start the story quests by talking to a new ‘mysterious castaway’ NPC who appears at outposts – new players can get to her immediately after completing the tutorial. The first quest takes you to the Sea of the Damned, an area which we’ve otherwise only seen while waiting to respawn. These story locations are entirely instanced for your crew, so you won’t run into any other players while you’re doing the mission. That means you can’t be griefed by other players while you’re trying to enjoy the story, and that the devs can use this closed approach to build levels with more dynamic, cinematic moments in mind.

The devs are also taking inspiration not just from the films, but from the original 1967 theme park ride. You’ll travel through grottos where scenes from the ride are acted out by ghostly pirates, complete with the original voice recordings sourced from the attraction, plus new lines from those actors. 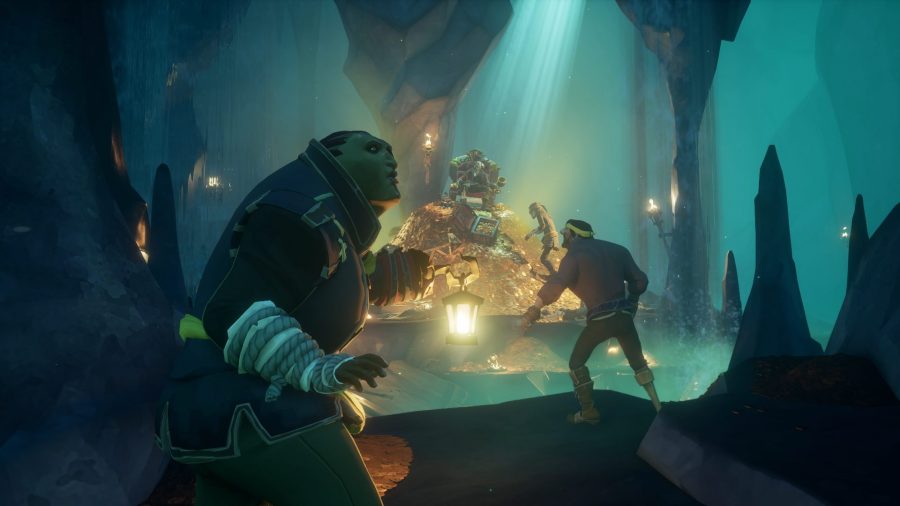 “Players get to visit locations that are inspired by the ride, but they’re our original take on them, as well,” Chapman says. “Some of the voice talent has returned to record new, original lines. We did those recordings on the original vintage mics that would’ve been used in the 60s, so we captured the same sound and feel.”

story missions are instanced for your crew, so you can't be griefed

Jack Sparrow himself is voiced by Jared Butler, who also played the character in Kingdom Hearts III and a few other games. As his performance in Kingdom Hearts and the Pirate’s Life trailers can attest, he’s an impressive soundalike for Johnny Depp. While there’s no motion capture, Rare also worked with Pirates of the Caribbean: On Stranger Tides stunt actor Simon Newton for an animation guide – Newton came to Rare’s studio in full Sparrow costume and make-up to act out scenes and provide authentic reference material.

Sparrow will occasionally join your crew as an AI companion at points in the story, and this is part of how Rare has tried to better balance these voyages for solo players. You also won’t find yourself needing to lug loads of items from place to place, or sail extensively back-and-forth between islands – the kinds of things that are only enjoyable with a group of fellow pirates. Actual enemy encounters will scale in difficulty with your crew size, though, so this isn’t necessarily going to be a cakewalk for experienced crews. 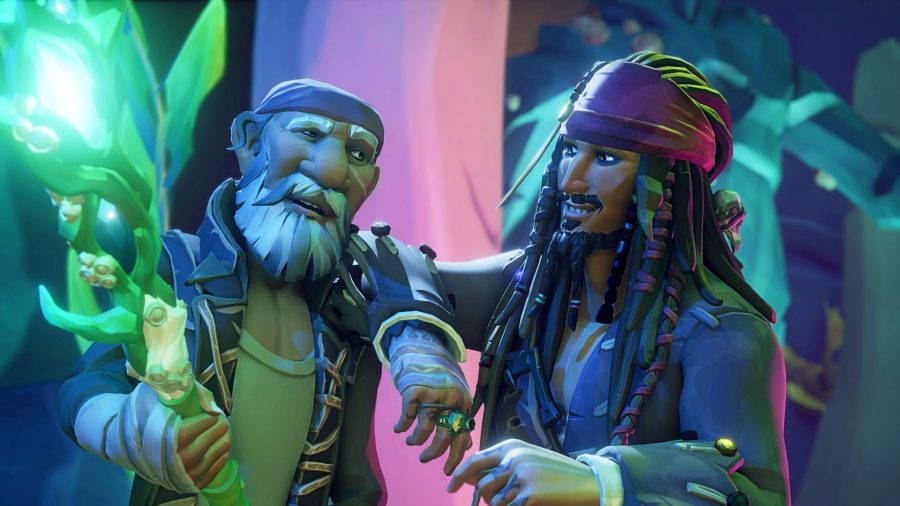 Besides the Sea of the Damned, the other big realm in the story is the Sunken Kingdom, where you’ll meet Sirens, which are probably the most exciting addition this update is making to the game as a whole. These are enemies that you’ll have to fight underwater, managing your breath while you fight. Some of them will be equipped with the Trident of Dark Tides, an item you can use as a sort of magic grenade launcher.

Both the Sirens and the Trident will appear outside the story in the broader sandbox, as will the two new enemy types: Phantom Pirates and Ocean Crawlers. The latter look like they’ll be a nice change of pace from all the skeleton hordes, too – there are big brute types, electric eel wielders that can attack at range or give lightning shields to their allies, and so-called ‘hermits’ that’ll come after you while emitting poison.

Plunder and pillage: You can buy Sea of Thieves here

For the most part, items themed after Sea of Thieves lore will serve as  free unlockables, while Pirates of the Caribbean-themed items, including the Jack Sparrow costume, will be in the real-money Pirate Emporium. But fully completing all the sidequests – this “is a spoiler,” Chapman jokingly warns, “but why not” – will unlock Yo Ho (A Pirate’s Life for Me) to play as a sea shanty. 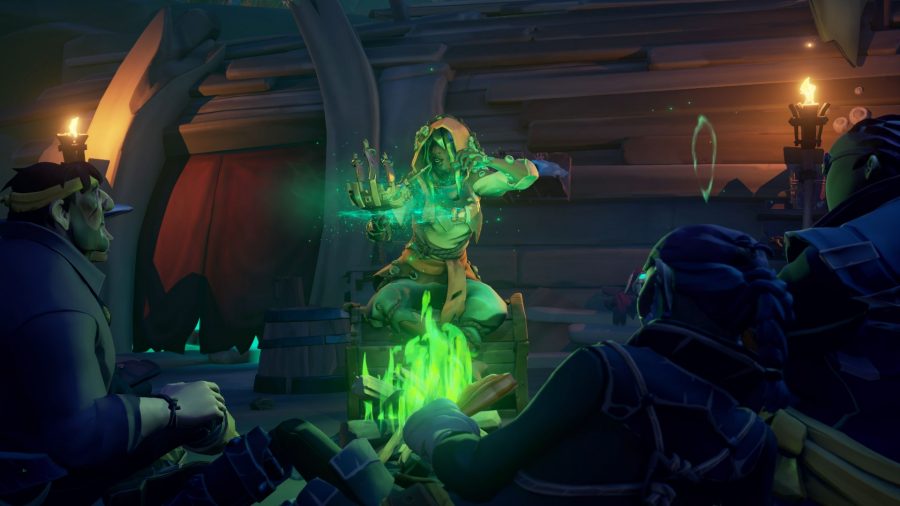 Rare still plans to continue the current seasonal structure, and has shifted its teams to ensure there are multiple groups working on successive headline content updates, while a single live services team keeps up with the regular live events. Season 3 and A Pirates Life are essentially a “mega-season”, executive producer Joe Neate says. You shouldn’t expect many – if any – future seasons to be this substantial, but A Pirate’s Life looks like the game’s most exciting collection of additions yet.

Don’t forget that you can grab Sea of Thieves here or via the Xbox Game Pass for PC. If you’re after more like this you can also seek out our list of the best pirate games on PC and plunder it to your heart’s content.