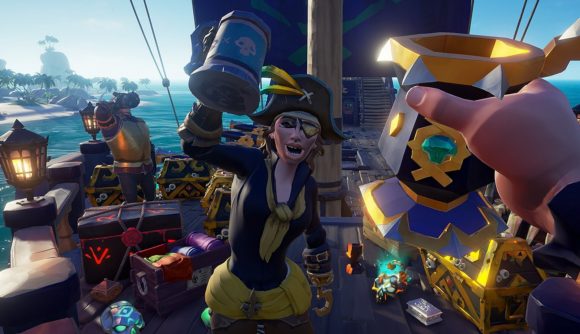 Sea of Thieves is back near the top of the Twitch charts these days, and it’s largely thanks to a single streamer: summit1g. He’s bringing tens of thousands of eyes to the game, and whether it’s his doing or the simple result of holiday sales and new Game Pass subscribers, Rare itself notes that there are plenty of new players in the game. But all this has the existing community asking how much piracy is too much piracy.

In the months since release, the Sea of Thieves community has coalesced into a fairly gentle group, and it’s one Rare has been eager to foster. The developers have even published a largely community-driven Pirate Code that – in fancifully nautical terms – encourages players to help out newbies, avoid particularly nasty griefing, and generally be nice to one another.

But theft, betrayal, and murder is part of the pirate experience, and that’s pretty much how summit1g – and many of the new players – have been treating their time in Sea of Thieves. A quick browse through the responses to any of summit’s tweets will surface a whole lot of arguments about whether targeting other players is a fair way to pirate.

Sea of Thieves is certainly built with PvP in mind, but tweets like this one where summit looks to sneak into a Discord chat where players try to build de facto PvE servers, straddle the line between just playing the game and straight-up griefing. Of course, PvE servers aren’t officially part of the game either, so maybe nobody’s playing quite right.

Related: Find out why Sea of Thieves was one of 2018’s best

Rare’s latest developer update video addresses all of this in relatively vague terms, but executive producer Joe Neate does encourage players to “fight with honour,” and brings up the pirate code once again. For many players – as Captain Barbossa might say – they’re more guidelines than actual rules.