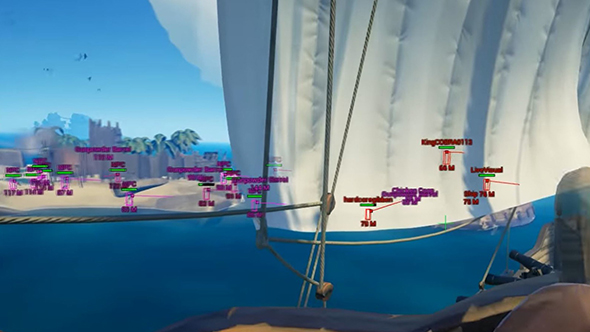 Sea of Thieves, for the most part, is a pretty laid back game. It’s a multiplayer sandbox for you and some friends to get up to hijinks and maybe do battle with some rival pirate crews along the way. Sadly, you can’t trust pirates, and hackers have begun to show up to game the system and take some unfair advantages.

Get an unfair advantage over fellow pirates the right way: by reading our Sea of Thieves tips!

As noted by Windows Central, some cheat tools are letting folks auto-aim for enemy heads or spot objects through walls, just as you might expect some unethical players to do. It’s no more widespread than hacking in any major PC title, but it does raise some questions about Microsoft’s direction for their gaming division.

As a Windows 10-exclusive, Sea of Thieves runs on Microsoft’s closed UWP platform, which in theory offers a closed, better protected executable to help prevent third-party modifications of the program. In practice, that hasn’t really been the case, even since well before Sea of Thieves. Microsoft did introduce a new anti-cheat program to UWP last year, though that may have been recent enough that Rare haven’t implemented it.

It also means that Microsoft’s largely noble cross-play policy now means that console players are apt to be hit with the hackers that we’ve gotten used to on PC. Most cross-play games with a competitive component allow you to choose whether you want to matched with players on other platforms, but Sea of Thieves with its sandbox nature doesn’t make the same allowances.

These sorts of issues aren’t likely to sink Sea of Thieves, but they will provide an extra wrinkle to future discussions of cross-play, especially when it comes to Microsoft’s first-party games. But with 2 million players, there’s bound to be a few bad eggs.