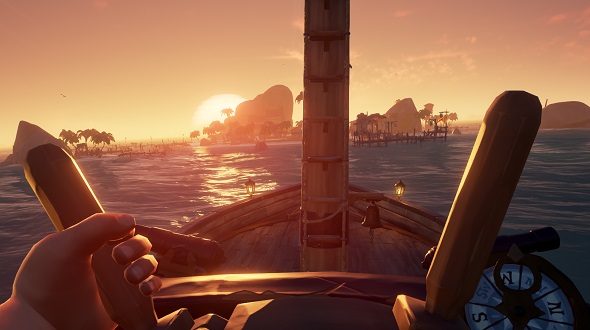 I climb the crow’s nest and open my telescope. Filled with a sense of accomplishment, having just turned in a treasure chest, I feel like relaxing a little and enjoying the view before I finish pirating for the night. Looking out, I scan the horizon and happen to spy two ships – a sloop and a galleon – approaching each other.

Here are 17 beginner tips for playing Sea of Thieves.

An exchange of smoke and flame is scored by the delayed sound of cannon fire. The two ships circle each other and there is another shallow roar from the blasting of guns. Caught in a desperate dance, the two ships make a final pass, and then slowly move apart. The galleon charts a course for land but the sloop isn’t so lucky. The sea’s blue tongues lap at its hull and pretty soon it swallows the dreadful meal whole. 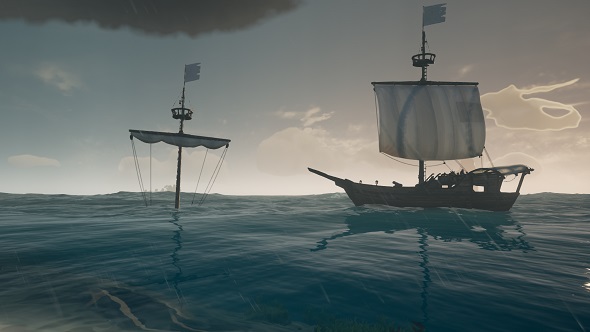 Sea of Thieves is not about working towards a grand goal or even about the cosmetic items you unlock. It is about the small moments that occur even when you are doing nothing – especially those. Whether that be getting drunk and falling off your ship, joining another crew for a tasty jam session, or gliding across the ocean and enjoying a beautiful sea view with friends.

My time in Sea of Thieves so far reminds me of my experiences roleplaying in Ark: Survival Evolved, but without all the survival elements that often get in the way. Sea of Thieves never interrupts you while you are pretending to be a pirate with other players, sending you messages about staying hydrated, how you need to put on warmer clothes, or feed your hunger. It just lets you exist in its world and encourages you to get drunk and wobble around on your peg leg as much as it dares you to brave bold adventures across the ocean. 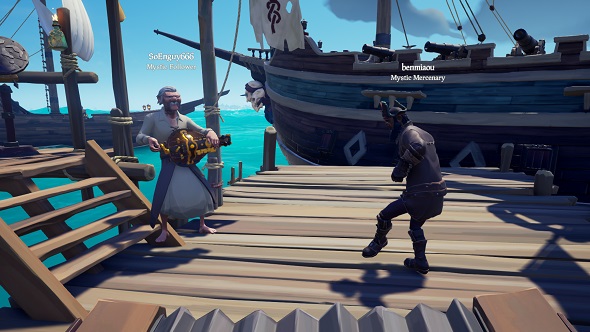 This is why, when I first started playing the game, I didn’t even think to set sail to find treasure or glory. Instead, I went on the lookout for players to interact with. I wanted to see how successful the game is at generating memorable, funny anecdotes between a group of players, and it did not disappoint. Only a few hours later, I had engaged in a dance off on the deck of my ship, joined a crew to explore tropical islands, and stowed myself away in someone’s crow’s nest.

Not all encounters have gone so swimmingly. I wouldn’t want them to, either. The threat of sharks aside, it is the unpredictability at the heart of Sea of Thieves that makes meeting up with other players so exciting. Tense moments of not knowing whether to approach a crew or not are played out in deliberate, slow movements to show you are not a threat. It can go one way, or it can lead to a cataclysmic misunderstanding when one of you equips a gun instead of a concertina. That is the unwritten drama online games are made for. 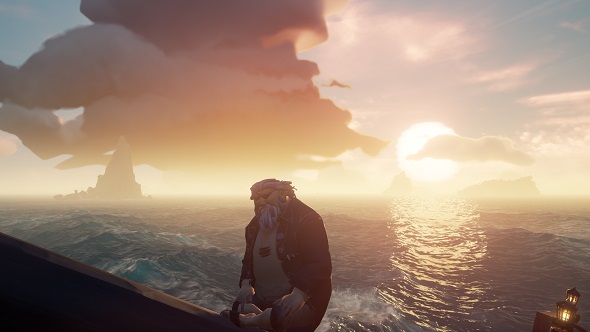 On one of my voyages, I came across a crew on an island and helped them to fight off a bunch of skeletons and take on a skull bounty. We fought for ten minutes, but when it came about time to part, I ended up being double-crossed and shot while I was serenading them with a sea shanty. I got no coin out of the encounter and my reputation did not increase, yet I got a cool story to tell out of it – one with its own twist and turns and a heartbreaking finale. These stories will live longer than any measly upgrade the game can throw at me, as I will recount them to people, perhaps for years to come.

Sea of Thieves is a great anecdote generator, but more importantly it is a piratical playground that will honour the time you spend in it alongside friends and strangers with punch lines, epic battles, and beautiful vistas that can help you decompress after the working day. Regardless of whether you are at the business end of another player’s rifle or buddying up with a couple of mates, there is rarely a dull moment in Sea of Thieves, even when you are setting out to do nothing.