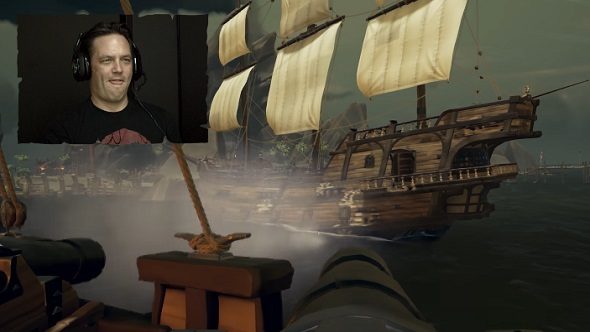 In a new developer diary for open world pirate-’em-up Sea of Thieves, the team at Rare are joined sailors from the Xbox team for a swashbuckling adventure. Starting off with a night-time island exploration, this developer diary quickly turns into a wild goose chase, as an enemy player ship tries to sabotage the excursion.

If you looking for fun with friends, check out these great PC co-op games.

With Xbox lead Phil Spencer and general manager of Xbox Operations Dave McCarthy joining Rare’s crew, the diary mainly shows how an island adventure can quickly spiral out of control once another pirate crew comes into view. As there is no GPS or marker system to alert players to incoming ships, pirates will have to designate a dedicated spotter to guard their ship as they go exploring. Upon discovering that an enemy ship is likely trying to scupper their vessel, the crew is forced to abandon their treasure hunt and flee back to the ship. As they make a dash for harbour, they are beset on all sides by cannon fire from the enemy ship, along with attacks from the skeletal pirates that guard the island’s treasure.

Once back at port, the crew manage to fend off the enemy attack, despite having a beached vessel and a lack of cannonballs to launch a suitable counter-attack. After the hostile ship sails away to lick its wounds, the combined Rare and Microsoft crew give chase after the suggestion of first mate Spencer, eventually catching up to their assailants and sinking their ship in revenge. As long as you have an eye on your opponent, you can theoretically chase an attacker all away across the Sea of Thieves until one of you is at the bottom of the ocean.

Upon sinking their opponent’s ship, Spencer and the crew show no quarter, shooting the fleeing sailors as they try to make it to shore. There’s no room for honour on the high seas, so definitely watch out for Captain Spencer and his motley crew when Sea of Thieves releases.

Sea of Thieves’ technical alpha is currently live, but we’ve yet to receive official word of when it will arrive on PC. Expect more news to come out of Microsoft’s conference at E3 in June.