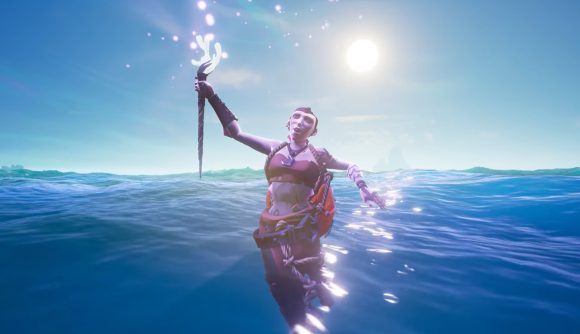 Rare vastly expanded Sea of Thieves‘ underwater action as part of A Pirate’s Life, and now that investment is continuing to pay off in Season Four. The devs provided a quick teaser for the new season last week, and today we’ve gotten a more extensive trailer showcasing all the new features you can expect in the update.

When the update lands, you’ll find siren shrines and undersea treasuries marked on your sea charts, and you can enter either by swimming to a glowing spot in the sea. There are six siren shrines, each of which pose “unique challenges and threats”, and look like they’ll essentially be dungeons. The treasuries, meanwhile, seem to be entirely combat focused, pitting you against hordes of sirens and ocean crawlers.

Defeating these challenges will, naturally, get you access to new treasures, which you can send back to the surface through a sunken merfolk statue. You’ll then be able to claim the treasure on the surface by talking to a merfolk there. (Hopefully that means that we can sail to the waiting merfolk at any time, so nobody has to babysit the ship back at the surface.)

You can see the new features – and all the new paid and free cosmetics – in the trailer below.

The Sea of Thieves Season Four release date is set for September 23. For more pirate games, you can follow that link.